Collaborating for a Cause 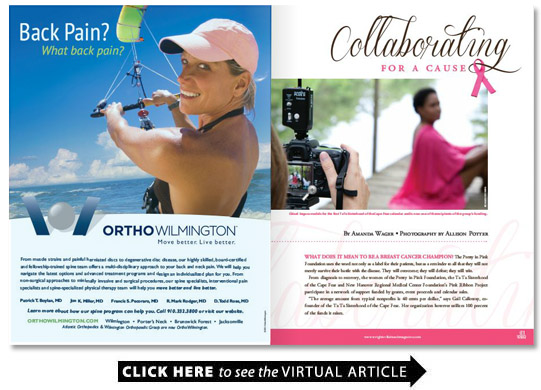 What does it mean to be a breast cancer champion? The Pretty in Pink Foundation uses the word not only as a label for their patients but as a reminder to all that they will not merely survive their battle with the disease. They will overcome; they will defeat; they will win.

From diagnosis to recovery the women of the Pretty in Pink Foundation the Ta Ta Sisterhood of the and New Hanover Regional Medical Center Foundations Pink Ribbon Project participate in a network of support funded by grants event proceeds and calendar sales.

The average amount from typical nonprofits is 40 cents per dollar says Gail Calloway co-founder of the Ta Ta Sisterhood of the . Her organization however utilizes 100 percent of the funds it raises.

The Pretty in Pink Foundation uses 90 percent leaving the last ten percent to pay for phones brochures and other materials.

Joy Wade thinks pink. She leads the Pretty in Pink Foundation in and believes with its alliance of breast cancer outreach organizations that the region is a model for the rest of the state. The whole town gets involved; local restaurants sports teams and businesses contribute to Pretty in Pinks funding. One business Coastal Ladies Carting (a trash disposal service that uses pink trash receptacles) donates a portion of its profits every month.

Theyve grown from one trash can to hundreds all over town; one mans trash is PIPs treasure Wade says.

Women like Wade and Calloway and others that work for the breast cancer organizations are paid through grants volunteer their time. None of the money raised goes toward salaries.

The Pink Ribbon Project funded through the NHRMCFs annual Pink Ribbon charity events cares for patients on an as-needed basis there is no limit to their help as long as there is funding.

When women or men (men make up one-and-a-half to 2 percent of all breast cancer cases) find a lump or are told by their doctors that they need screening the Pink Ribbon Project is generally the first to step in. For those who are uninsured or underinsured speaking with Pink Ribbon outreach coordinator Iris Baker can make the difference between not knowing and defeating the disease.

What began 15 years ago as a project by a cancer survivor giving out comfort bags to patients turned into this high profile local organization at the forefront of cancer treatment. Shortly after its beginning NHRMCFs Pink Ribbon Project extended its efforts to mammography and diagnostics. Within a decade and a half Pink Ribbon has raised more than $1.5 million providing breast cancer screenings for thousands of women and men.

Now Pink Ribbon supplies mammography vouchers to one of five fixed screening locations. Established in 2009 the voucher program replaced the single mammography van. Baker who coordinated the vans service since 2004 couldnt be happier about the change.

Yes our voucher program was a little slow to get started we had to distribute the vouchers and get the word out but from October 11 2011 to July 31 2012 we have already screened 697 patients. Our maximum number on the van was 277 in a fiscal year.

In the unfortunate circumstance that cancer is diagnosed patients are not left wondering what to do next. They are able to proceed with treatments without hesitation.

Baker refers women to several other programs including Pretty in Pink that funds surgeries and other costs and the Ta Ta Sisterhood that takes care of many nonmedical expenses depending on each patients needs.

We work on this together to provide help to women through the continuum of care Baker says.

Oftentimes it is the Pretty in Pink Foundation that is the first responder to the backside of cancer the treatment that begins after diagnostics are complete.

Seven women are going to get a great reading and they are going to breathe easy says Joy Wade. We partner with Pink Ribbon for that eighth person that gets the not-so-good reading. Whether they need financial assistance or not they can call and tell us I have just been diagnosed with breast cancer what do I need to do now? How do I start? We try to be there as a first responder.

Wade says she has always been a doer and a caregiver.

When I grew up it was just what you did you took care of people.

After retiring from a career as an elementary school teacher several family members and friends were touched by breast cancer. Wade realized there was more that could
be done to help them. She began her own organization called Cancer Connect.

After driving a champion to her surgery appointment she learned about Pretty in Pinks efforts. As we were walking in she said Thank you so much for staying with me and bringing me home. I actually got a call this morning from the Pretty in Pink Foundation wishing me best. It was seven in the morning Wade says.

She was amazed. Its easy for someone to pay your bills but the personal touch is what is most important Wade says.

The woman told her that Pretty in Pink originally based in was thinking of opening an office in . Wade jumped at the chance becoming the program manager the next week.

Pretty in Pink has become more than just a job for Wade.

When you sit with those ladies who are having blood transfusions and surgeries and chemotherapy you cant help but have it become a passion. You literally are changing peoples lives she says.

Just as passionate about the cause Gail Calloway of the Ta Ta Sisterhood of the is a breast cancer champion herself. She chooses to make light of the situation whenever possible and believes that the women of the deserve to be able to do the same. By holding events such as the Barbeque for Boobs Cook-off and Bra Day USA during which the group plans to use donated bras to make a bra sculpture during a day of entertainment the Ta Ta Sisterhood has fun for a cause.

The organization began while Calloway was going through treatment. She and a friend realized that there were many women who didnt have insurance or were underinsured.

We saw that there was an opening there and wanted to help out. Thats where we decided to do the calendar Calloway says. This year marks the third for the Ta Tas popular calendar which showcases professional photographs of women during their breast cancer journey.

When they asked for volunteers the response was overwhelming. Women as young as 21 and all the way up to 92 have been featured in the Ta Tas calendar.

We dont choose by looks or anything like that Calloway says. Its a feeling and their back stories.

The models are pampered for a day going to a spa having their hair and make-up done.

The spa services are donated by a local salon every year. This year they were donated by Bangz Salon. They set up a station on-site wherever they are taking the calendar photos.

One of the things we unanimously get from everyone when theyre getting their pictures done and theyre naked is how exhilarating and fun it feels to just let go like that. It makes them feel good it does.

The proceeds from the calendar go toward Ta Tas efforts to help with the day-to-day things that people cant take care of when theyre not well. They pay for expenses outside of medical costs including electricity bills water bills prescriptions and more.

I know its appreciated and I know it makes a difference in many peoples lives Calloway says. Thats whats important.