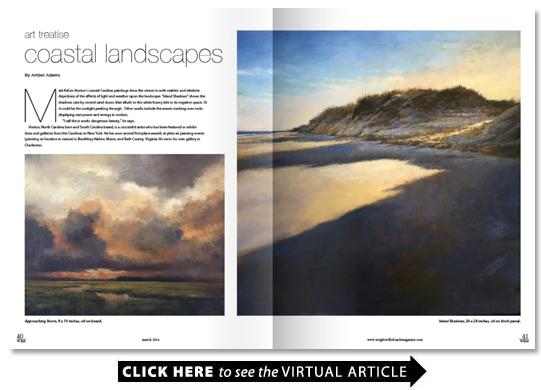 Mark Kelvin Horton’s coastal Carolina paintings draw the viewer in with realistic and idealistic depictions of the effects of light and weather upon the landscape. “Island Shadows” shows the shadows cast by several sand dunes that allude to the white foamy tide in its negative space. Or it could be the sunlight peeking through. Other works include the waves crashing over rocks displaying vast power and energy in motion.

“I call these works dangerous beauty ” he says.

Horton North Carolina born and South Carolina based is a successful artist who has been featured in exhibitions and galleries from the Carolinas to New York. He has won several first-place awards at plein air painting events (painting on location in nature) in Boothbay Harbor Maine and Bath County Virginia. He owns his own gallery in Charleston.

Although he was always fascinated with art he never dreamed he would ever be able to make a living at it.

Horton grew up in a small town near Albemarle where there were no art classes in sight. As a young child he remembers drawing on the church boards on Sunday mornings. Resourcefully he drew on the stiffening boards included in his father’s dry cleaning.

His older brother went away to the Ringling College of Art and Design in Florida. On his trips home from school he would bring art supplies to Horton.

“From then on I was always around it ” he says.

His brother’s wife became an art teacher and would bring him supplies from her classroom. Horton soon became the resident “artist” at his high school despite not having any formal training.

After high school he attended Wingate University for a year and a half and then transferred to East Carolina University. Horton majored in graphic design with a minor in drawing but his true passion was painting.

After graduating he received an eight-week internship with an ad agency in New York City in 1983. Eight weeks turned into 18 years as he worked his way up from intern to graphic designer and to creative director. He eventually formed his own design company.

Although he worked almost constantly he enjoyed his rare free time in museums studying landscape paintings.

“Every free minute I had I was in museums or galleries ” he says.

Living in New York allowed him to study the primary works of his major influences like George Inness Herman Herzog Frederick Church and the tonalist photographer Edward Steichen. These 18th-century artists are rooted in classical realism and transcendental ideals that capture nature’s beauty. The Hudson River soon became his muse and favorite landscape to paint.

In 2001 he decided to devote himself whole-heartedly to art. He returned to his Southern roots moving with his wife to Charleston. His brother opened a gallery in Charleston and Horton wanted to do the same.

In 2005 Horton Hayes Fine Art opened its doors. Today the gallery represents 14 artists from all over the country. When they come together they “all go out and paint experiment and try new methods ” Horton says.

He frequently ventures into North Carolina offering workshops on Bald Head Island and along the Cape Fear River. He says the sunset over the water every night is like a light show.

The thrill of painting out on location or en plein air is an exciting experiment. The effect of weather on the water is always a new experience and the canvas is a playground for playing around with fresh techniques.

“I never get bored because to me every painting has led to the next painting ” Horton explains. “It’s like playing golf. As long as you can get one good shot in you want to keep going.”

Horton has a “stop and smell the roses” approach. He listens to the oystermen clammers and fishermen of the Lowcountry in order to understand life at sea. He goes out on the boat with fishermen to gain a sense of their perspective and relationship to the ocean. After returning to shore he thinks of how he can summarize the essence of four or five hours in one image.

He compares it to his work designing movie posters: “I would watch these movies and sum up a two-hour movie in one image.”

Painting he says is combining a 360-degree scope with an essence of human experience to frame one part of a seascape. The possibility of changing weather can change the perspective of a piece. “Receding Tide” could represent twilight just as the sun is coming down or the calm before a swelling storm. “Approaching Storm” is an oil on canvas that could represent “Receding Tide” only moments later.

Most recently Horton has been painting less complex water scenes to as he did in his earlier advertising career “get to the point.”

Whether simple or complex Horton hopes his art helps people stop and see the world around them. One of the best compliments he ever received came from a Charleston native who built his house. The contractor had been in the neighborhood several times not once noticing the marsh or the crabbers that Horton saw on his morning walks.

As a gift Horton gave the contractor a painting of the marsh. The man replied. “I grew up here and I never noticed those crabbers until now.”

Horton’s philosophy is to have fun stay true and stay busy.

He speaks at colleges and arts events all over the country overcoming a fear of public speaking to enthusiastically spread his love of painting. He conquered his fear because he’s passionate about the topic. “And then it’s easy ” he says.

He knows there are many youngsters like him who have talent and passion and just need an opportunity.

“There are so many great talented kids out there who never realize that there’s a possibility of art ” he says. His advice to young painters is “don’t get discouraged be open and go with the happy accidents.”