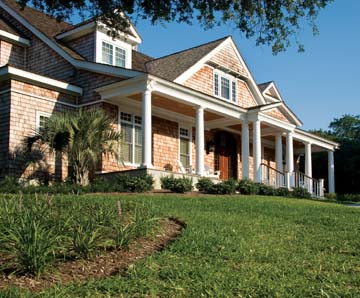 t is classic Shingle Style. The skin tanned by the elements; the bone structure tailored with understated details like a carefully combed part that when arranged with symmetry creates a tidy unified appearance. Imagine a home that is to architecture what a sporting blue blazer is to a wardrobe: at once upstanding and ubiquitous. Representative of the summer homes of the leading wealthy elite and the coastal cottages of the Carolinas the Shingle Style is as fashionable today as it was yesteryear and like a meticulously folded white-linen handkerchief tucked into the left breast pocket behind the family crest never goes out of season.

“On the outside it’s very reserved and elegant but when you walk in there’s the surprise. As soon as you open up the front door without any parlor or hall it’s very much an informal beach house design ” says John Parker architect of the second home of Kel Parker and Jordan Normann in Porter’s Neck.

That design was dictated by the rules of the parent style and the dreams of the man of the house Kel Normann who had very definite ideas about how he wanted to retreat to his second home on the coast. The home reiterates his North Carolina roots and tips its hat to the New England coast where the Shingle Style is as deep-rooted in the landscape as the first families who built them are entwined in the country’s history.

The heart pine beams trucked in from Tennessee and the rough-sawn floors from North Carolina are authentic to the period of the vernacular coastal architecture of the region down to the plantation brick walkways the tabby foundation and the cut stone tile and boulder details.

“There’s a real passion for me about the house ” Kel says. Inspired by the architecture of his father’s hometown Morehead City and the vintage seacoast homes and sandy beach cottages found there and in nearby Beaufort Kel and his wife Parker tripped to Nags Head for an up-close look at the Old Nags Head Style that revealed more of the same vernacular idiom with heavily timbered interiors and minimal decorative trim.

Covered with unblemished cedar shingles that are easily replaced or repaired after driving wind and pounding rain the natural exterior of a coastal Carolina Shingle Style structure weathers to a silvery patina reminiscent of stormy clouds sea mist sand dunes and the rocky coastal terrain associated with the north Atlantic.

“My buddy and I went to the Hamptons about four or five years ago ” Kel says. “We were sneaking down driveways and crawling under shrubs to take pictures of these houses — the garage doors … the dormers … the porches … I came back and put it all together and met with John Parker and said ‘Okay I like these dormers I like these porches I like this this this ’ and put it together like a puzzle. I had sketched out pretty much what I wanted ” Kel says.

Articulating those sketches into a cohesive beach cottage design was John Parker’s architectural challenge and building it was David James’ achievement. The mass of the house is hidden beneath a steeply pitched roof perforated with dormered windows. The ceiling heights of interior rooms on the second floor are taken nearly to the roofline as they would be in an Old Nags Head home and on the first floor they’re taken to 12 feet supported by the solid heart pine beams that carry the upper level floor load.

“The beams are structural; they’re not just show ” Parker says. Custom cut and secured with steel bolts James plugged the hardware with pine veneer to create the appearance of wooden pegs.

“This is a big house but it doesn’t appear big when you’re next to it ” James says. “When you’re standing out in front you have no feel for how big the house is.”

“The house is basically the footprint of the previous house ” adds Parker.

The Normanns who purchased the property five years ago lived in the original house for a few years James says. “It was a 1960s ranch house that we first thought of renovating but they couldn’t achieve what they wanted.”

“They liked the basic … layout. When you walked into the original house it was very much an open plan like this ” Parker says.

From the threshold to the rear wall of windows the open floor plan lobbies for living lounging dining and cooking in one sumptuous great room. “This is Kel’s baby ” says Suzanne Reid interior designer. “He wanted it very masculine kind of a guys’ hang-out clubby but Tommy Bahama dark colors warm. He’s kind of a less-is-more guy. He doesn’t like things overdone. It’s more of a lifestyle — islands browns and earthy tones.”

The rambling interior living spaces — there are two club rooms one on each floor — are furnished with worn leather upholstered club chairs and piped tobacco brown sofas arranged in matched pairs.

A grand antique pine table custom-made for the setting seats ten; and a furnished sitting area near the front door straddles the space between the informal foyer and the open kitchen creating a subtle division that is underscored by a variation in ceiling finish. Upstairs a lively palette of tropical colors and fabrics decorates the guest rooms arranged around a trophy and billiard hall. At both levels the views from the interior draw the eye to the waterfront and the outdoor spaces on the east elevation.

“This back area developed as we built it ” James says. “They knew they were going to be hanging out there a lot. This was all built to enhance the view. It really wasn’t on the plans. We worked it all out as we went.” Parker adds “It’s one of those things … you get the feel first and then you develop the secondary parts.”

The architecture embraces the natural elevation of the site its contoured west lawn the high bluff overlooking the Intracoastal Waterway to the east. James and Reid agree that from the water the scale of the house suits the landscape. From the waterway the rear elevation is balanced by an open colonnade — two bays wide — on the southeast corner with a single-bay screened porch on the northeast corner and an adjoining open patio. At the roofline a single gabled dormer and engaged parapet wall is the epitome of Shingle Style detailing. Surrounded by stone tile and brick walkways a grassed terrace and decking down to the waterline the lively waterfront spaces belie the home’s restrained façade.

In the boathouse with Kel looking back over the waterfront the Sanford native lays his cards on the table and talks about his family’s summertime traditions — boating to Wrightsville Beach to dine al fresco fishing and kayaking — while motor yachts and sailing craft stream up and down the waterway behind him. Kel’s house screened from view by native live oak trees is ready to serve many guests.

With double ground-floor master suites four guestrooms upstairs (that sleep two golfing foursomes) and a guest house on the property Kel and Parker Normann and their teenage daughter Jordan are ready to lodge their nearest and dearest whenever the wind shifts in the right direction.

“As the house ages it’s just going to get better ” Kel says. “… I don’t know that I’ll ever retire. If I do this is where we’re going to spend the majority of our time.”