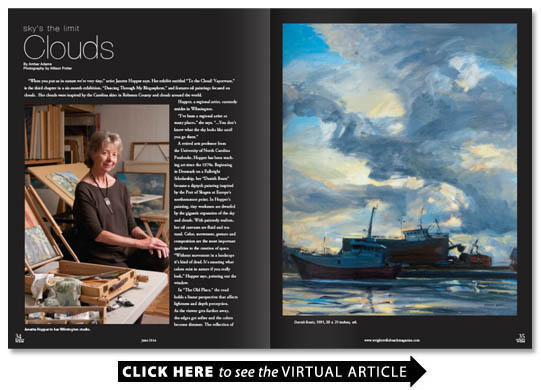 When you put us in nature we re very tiny artist Janette Hopper says. Her exhibit entitled To the Cloud! Vaporware is the third chapter in a six-month exhibition Dancing Through My Blogosphere and features oil paintings focused on clouds.  Her clouds were inspired by the Carolina skies in Robeson County and clouds around the world.

I ve been a regional artist so many places she says. …You don t know what the sky looks like until you go there.

A retired arts professor from the University of North Carolina Pembroke Hopper has been teaching art since the 1970s. Beginning in Denmark on a Fulbright Scholarship her Danish Boats became a diptych painting inspired by the Port of Skagen at Europe s northernmost point. In Hopper s painting tiny workmen are dwarfed by the gigantic expansion of the sky and clouds. With painterly realism her oil canvases are fluid and textural. Color movement gesture and composition are the most important qualities to the creation of space. Without movement in a landscape it s kind of dead. It s amazing what colors exist in nature if you really look Hopper says pointing out the window.

In The Old Place the road holds a linear perspective that affects lightness and depth perception. As the viewer gets further away the edges get softer and the colors become dimmer. The reflection of the sky on the ground allows the clouds to look like cotton. The idea that the ground and the sky are connected was introduced to Hopper by artist Frank Okada.

Hazy Memory creates a clear luminous wash with a particular moment of light that reflects a specific mood in the painting.

Hopper says she was most influenced by British painter JMW Turner. The Romantic painters believed that whatever they were painting was a reflection of their emotion. There is a sense of irreplaceability in the ephemeral nature of the shifting clouds and our human emotions she says. The clouds are complex ephemeral and ethereal. Clouds are a regenerating source for our waters. They fill our spirits. Clouds  displays our forever-changing environment. With new technologies with loud machinery like oil rigs Hopper asks where are the quiet places going to be?

In a subtle way something is stirring up and changing she says. … Janette s work is a good fit for Costello s because she s lived all over the world. Her art attracts international culturally involved people as her paintings demonstrate a high caliber of work.