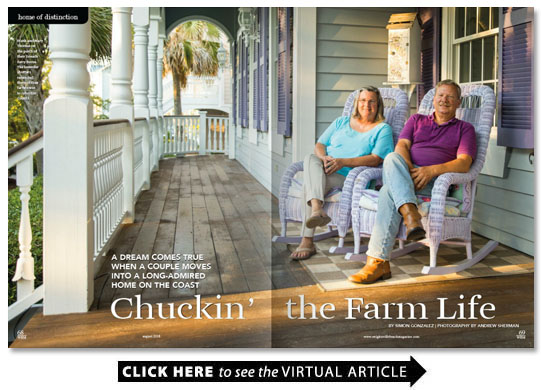 Every year Frank and Mary Matthews would travel from their farm in Johnston County to Sneads Ferry for a family vacation. And every year before they went home they would drive down Big Hammock Road to Pelican Point enchanted by the waterfront peninsula.

“We came down here vacationing and we found this street umpteen years ago ” Frank says.

One house in particular caught their eye.

“We’d always come by and see this house and stop and look at it how pretty it was ” Frank says.

It was built on a double lot the largest on the street surrounded by mature live oak trees. The facade is striking with a big front porch columns arches a widow’s walk perched on the roof and a four-car garage attached to the house by a covered walkway.

On the way back home they’d indulge in pleasant fantasizing: someday we’ll move there.

Frank and Mary saw the house when it was under construction some 20 years ago. They watched it take shape and over time noticed increasingly complex landscaping the addition of the garage and then the apartment over the garage and other changes to the property.

“We’d come every year and they’d be putting a bird house here be putting up something else ” Mary says.

But every time Mary looked at the house there was one thing in particular she noticed.

“One thing that drew our eye was the lavender shutters and then the white framing around it ” she says.

“We had his mama’s home that was 200 years old on the farm ” she says. “We noticed everything because it fit the farm so much.”

The house that had caught their eye was custom designed by Wilmington architect Tilghman Herring for Casey and Debbie Dean.

Casey Dean was president and CEO of an international electrical design-build and systems integration firm headquartered in northern Virginia. They designed the Sneads Ferry house to be a getaway and eventually their full-time residence.

But eventually the Sneads Ferry lifestyle proved to be a little too slow-paced. They built a home in Florida and put the house on Pelican Point on the market.

About that time Frank and Mary made their annual trip to the coast.

“We came down this path like we normally did ” Mary says. “I said ‘Frank do you see what I see?’ He goes ‘Oh no. That’s a for sale sign.’ I said ‘I don’t know what you have to do but we’re getting this house.'”

Frank and Mary owned two farms 158 acres with 100 head of cattle and an 80-acre spread. They had just sold the 80 acres to a developer and were in the market for a vacation home. But this — their dream home — was out of their price range.

“I was sitting in the car on the way home going over it in my mind ” Mary says. “I knew what the price was. How were we going to work this? That very night the developer who bought the first farm called from Disney World and said ‘I hear there are subdivisions coming around your farm.’ He said ‘I need your farm. Name your price.’ I swear as I’m standing here my arms went ice cold my heart stopped beating. I was like ‘Oh this is how I’m going to do it.’ He said ‘I will have you a check in the morning. Let me know what price you need.'”

Selling the land was just the first step.

“We had 100 head of cattle to sell all these tractors and horse trailers ” Mary says. “It was like dominoes. It could not have gone any better. It all fell into place and we were down here in three months. It was a dream come true. We moved in on my birthday. Thank you darling.”

They didn’t want the house just for themselves. Frank and Mary have two sons four grandsons and a granddaughter. Family is of utmost importance.

“That’s what we live for now ” Mary says. “That’s why we bought this property so family could come. We don’t have much left. All the grandmamas and aunts and uncles and cousins that lived on the farm have since passed. The few that are left we’re like ‘please come.'”

The Deans were very hands-on with the original construction.

“It was a labor of love designing that house ” Herring says. “They were engaged and participated.”

They imbued the home with lots of unique touches. The flooring in the office is cumaru a Brazilian hardwood. The fireplace mantles came from historic homes. The granite tops and cabinets in the kitchen are custom made.

“They were well traveled ” Herring says. “There was a lot of furniture and tiles they got from other places. They brought furniture back from the islands. They brought a fountain back from France. They plugged it into the house wherever it would fit.”

The Deans were selling the house mostly furnished but intended to take the distinctive dining table hand-carved and painted in the Philippines with them to Florida.

“She didn’t want to leave it ” Mary says. “They went to the Philippines and it took ’em two weeks to make it. The men carved it and the ladies painted it.”

Mary says Debbie Dean changed her mind after meeting the couple that would be moving into the home.

“She knew grandchildren were coming ” Mary says. “She left it so we could all sit at the table at one time because that’s my big thing.”

In fact it was meeting Frank and Mary that persuaded the Deans to go through with the sale.

“They almost backed out ” Mary says. “She was standing on the steps the night before crying. He said ‘Let’s just meet them. Let’s see who they are what they’re going to do with it.’ When they found out it was a family coming and grandchildren were going to be here they were OK. That’s what they really wanted the house to be a family home.”

Located on the Intracoastal Waterway the house has a spectacular view from the widow’s walk. Chadwick Bay is to the east and the Atlantic can be seen across North Topsail Island. The widow’s walk is something of a landmark for boaters and a few fishermen.

“If you want to see the ocean just go to the top of the house ” Mary says.

The view from the ground isn’t bad either. Frank enjoys spending time in the sunroom attached to the sunken living room and watching the traffic on the ICWW.

“You just sit there and see all the boats go by ” he says. “At night you’ll see the shrimp boats with their big lights. And barges they’ll come through at 10 11 o’clock at night with their lights on.”

He also likes to spend time on the water himself. He keeps a boat and a Jet Ski down at the dock.

“I like to fish ” he says. “I’m still learning. I’ve always been a freshwater fisherman.”

The dock is one of Mary’s favorite places also. Inside the house she’s partial to the open kitchen dining and living areas “because that’s where we all end up. Everybody’s sitting around the bar when we’re cooking. We can all fit at the table. That’s family time.”

The house sits on 1.5 acres so Frank and Mary spend a lot of time outside working in the yard.

“It’s a lot of upkeep but it’s nothing like the farm ” Frank says. “When you went to mow the grass you were 8-10 hours on the lawn mower. Now I’m through in about 25 minutes.”

Mary recalls those days on the farm when Frank spent hours outside working. She’s seen a change since they moved to Sneads Ferry.

“I see the man I married 40 years ago back in college ” she says. “He’s relaxed and the burden’s off him now.”

Frank is a cancer survivor. The disease has been in remission for 10 years but Mary remembers. That’s another reason they bought the house.

“We take it day by day. Any time I can have any memories we can make I’ll take it. Life is really short. So we gave up the farm life we knew and came to the beach.”

The farm will always have special memories but now Frank and Mary are making new ones in Sneads Ferry.

“I just look for dolphins instead of calves ” Mary says. “I’ve been blessed. To end up here somewhere we just looked at and dreamed of it’s just fabulous. And then to see him relaxed. That was my goal with whatever time we have left.”