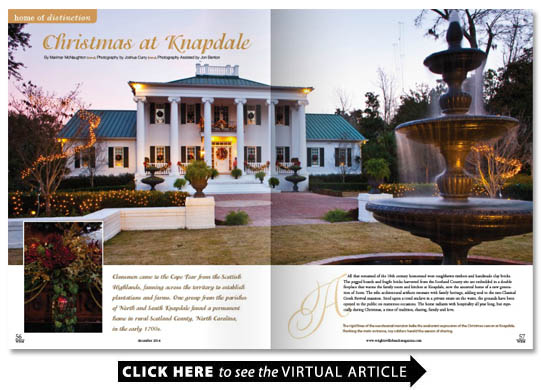 Clansmen came to the Cape Fear from the Scottish Highlands fanning across the territory to establish plantations and farms. One group from the parishes of North and South Knapdale found a permanent home in rural Scotland County North Carolina in the early 1700s.

All that remained of the 18th century homestead were roughhewn timbers and handmade clay bricks. The pegged boards and fragile bricks harvested from the Scotland County site are embedded in a double fireplace that warms the family room and kitchen at Knapdale now the ancestral home of a new generation of Scots. The relic architectural artifacts resonate with family heritage adding soul to the neo-Classical Greek Revival mansion. Sited upon a treed enclave in a private estate on the water the grounds have been opened to the public on numerous occasions. The home radiates with hospitality all year long but especially during Christmas a time of tradition sharing family and love.

I ve just had a love of Christmas for many years the homeowner says. I m a collector.

Keepsakes are important to her like the handmade ornaments her daughter made in kindergarten. Almost 20 years have passed since that time but every year those childlike decorations are unboxed and hung once more alongside other favorites.

Things people give me some people make for me — they all have a meaning. They touch me in some way she says.

Cherished memories of family gatherings are the touchstone for the annual celebration that often begins in late November and stretches until the New Year.

In our family it was just very special and in most families it is she says. At a young age I was drawn to the whole idea of being together.

She says she was enthralled by the festive decorations and the colors.

It s my favorite holiday always was she says.

Perhaps it was losing her mother when she was 18 that inspires her to recreate the holiday for loved ones each year.

I do remember our last Christmas and I always try to say Make every day special. Enjoy your holiday because we re not promised another one.  I lost my father at a young age too she says.

Carrying forth her mother s love of the holiday she has amassed a collection one friend suggests rivals the decor at the Biltmore Estate.

The tree is always the special thing that we love the most. My daughter her dad and I  have a tradition of going to get the tree. We love the Fraser firs and have to go look at all the lots she says. My daughter wanted to have a large tree. This has been the most spectacular tree we have ever had.

Each ornament stirs a memory: a first wedding anniversary gift from her mother-in-law her husband s love of Airstream travel trailers her daughter s handprint from First Presbyterian preschool.

The Santas love the Santas she says.

The Lynn Haney Santas all their faces are hand painted and their clothes hand sewn. You can get them at Protocol. I m crazy about a nativity set. I ve had this one for a long time she says referencing a pastel porcelain ensemble from Fitz & Floyd.

The other thing I collect are snow globes she says cradling one between her hands. This is Christopher Radko.

One of her favorite places to hunt for Christmas decorations is Carriage Trade Antiques in Blowing Rock North Carolina.

I always go after Christmas and buy stuff for the next year she says.

While she s busy curating her collection a team of designers and helpers assemble and install the decorations each year.

The interior stage was set by Helen Brumbaugh of Decors by Helen the homeowner s original interior designer. The Christmas decor began with Belinda Bell Art & Accessories. Bell was commissioned to create the garlands with faux magnolia leaves. She had a designer who worked for her Daniel Bowden who now installs those garlands and much more each year.

We ve been in this house ten years. I ve had the same Christmas decorations for ten years the homeowner says yet layers of embellishing are allowed. In 2006 when a niece s engagement was celebrated Teresa Gausman s Premiere Events added the garlands around the chandeliers.

Because I ve been collecting for so long I told myself I can t buy anything unless it s something very unusual very special or speaks to me in some way she says.

Her 2013 addition is a Mark Roberts  carousel. Placed on the center island in her kitchen it honors her daughter s love of carousel horses.

When we designed this house I tried to think about Christmas she says.

Tradition family love and sharing. What good is all this stuff if you don t have anybody to share it with?

Last Christmas she shares a friend confided: I don t feel like it s Christmas unless I ve been to your house.