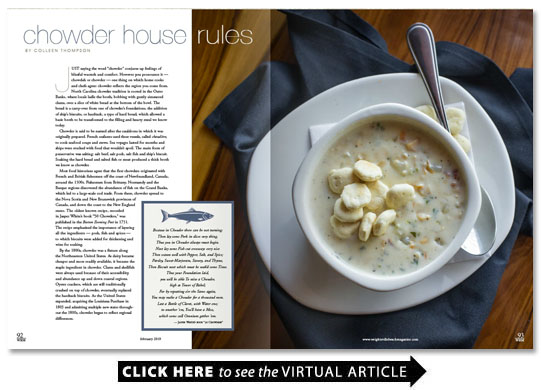 Because in Chouder there can be not turning;

Then lay some Pork in slices very thing

Thus you in Chouder always must begin.

Then season well with Pepper Salt and Spice;

Then Biscuit next which must be soak’d some Time.

high as Tower of Babel;

For by repeating o’er the Same again

You may make a Chouder for a thousand men.

Last a Bottle of Claret with Water eno;

to smother ’em  You’ll have a Mess

which some call Omnium gather ’em.

Just saying the word “chowder” conjures up feelings of blissful warmth and comfort. However you pronounce it — chowdah or chowder — one thing on which home cooks and chefs agree: chowder reflects the region you come from. North Carolina chowder tradition is rooted in the Outer Banks where locals ladle the broth bobbing with gently simmered clams over a slice of white bread at the bottom of the bowl. The bread is a carry-over from one of chowder’s foundations the addition of ship’s biscuits or hardtack a type of hard bread which allowed a basic broth to be transformed to the filling and hearty meal we know today.

Chowder is said to be named after the cauldrons in which it was originally prepared. French seafarers used these vessels called chaudiere to cook seafood soups and stews. Sea voyages lasted for months and ships were stocked with food that wouldn’t spoil. The main form of preservative was salting: salt beef salt pork salt fish and ship’s biscuit. Soaking the hard bread and salted fish or meat produced a thick broth we know as chowder.

Most food historians agree that the first chowders originated with French and British fishermen off the coast of Newfoundland Canada around the 1500s. Fishermen from Brittany Normandy and the Basque regions discovered the abundance of fish on the Grand Banks which led to a large-scale cod trade. From there chowder spread to the Nova Scotia and New Brunswick provinces of Canada and down the coast to the New England states.The oldest known recipe recorded in Jasper White’s book “50 Chowders ” was published in the Boston Evening Post in 1751.The recipe emphasized the importance of layering all the ingredients — pork fish and spices — to which biscuits were added for thickening and wine for soaking.

By the 1800s chowder was a fixture along the Northeastern United States.As dairy became cheaper and more readily available it became the staple ingredient in chowder. Clams and shellfish were always used because of their accessibility and abundance up and down coastal regions. Oyster crackers which are still traditionally crushed on top of chowder eventually replaced the hardtack biscuits. As the United States expanded acquiring the Louisiana Purchase in 1803 and admitting multiple new states throughout the 1800s chowder began to reflect regional differences.

Chowder can take advantage of almost any ingredient that goes to qualify it as a thick wholesome soup. The addition of ingredients like sweet or new potatoes mushrooms and cheese adds depth and richness. Winter squash like acorn and butternut adds color. Corn has long been prized for its affordability and heartiness and has been used in chowder since at least 1884 when the first recipe appeared in Mary Lincoln’s “Boston Cook Book.” In the 1900s the Shakers of Pennsylvania baked fresh corn kernels in the sun for days then soaked the ears in warm water for 12 hours before salting and serving them with butter and cream. The Shaker culinary legacy lives on in simple wholesome food prepared with local ingredients.

Today there are as many variations on chowder recipes as there are ports of call. Recipes have been passed down through generations and tweaked here and there for taste. Chowder festivals and cook-offs are held from Cape Cod to Carolina Beach and every coastal town in between. Pleasure Island held its final Chowder Cook-Off a tradition that lasted 20 years in 2017.

If you’re from New England clams are king and so you certainly grew up with them in a thick and creamy broth with the addition of onions potatoes and salted pork but most definitely no tomatoes. Manhattan clam chowder a characteristically red dairy-free broth that makes full use of the tomato originated with Portuguese immigrants who arrived around 1910. The first recipe appeared in “Soups and Sauces” by Virginia Elliott and Robert Jones in 1934 who named the soup but it has almost no real connection to the city. The New England chowder purists were purportedly so unhappy with the red version that a Maine legislator introduced a law in 1939 prohibiting tomato usage in clam chowders. Renowned Chef James Beard (1903-1985) described the Manhattan version: “that rather horrendous soup called Manhattan clam chowder … resembles a vegetable soup that accidentally had some clams dumped into it.”

Rhode Island clam chowder is distinctively absent of dairy and tomatoes and its clear broth is known for its unique use of quahogs (pronounced co-hogs). Quahogs are Rhode Island’s state shellfish and the key ingredient along with bacon onions and potatoes.

On the Outer Banks of North Carolina Hatteras Island-style chowder also skips the cream and tomatoes and uses clam juice instead along with tiny littleneck or cherrystone clams that produce a delicate sweet flavor.

In eastern North Carolina a close cousin of chowder began on the banks of the Neuse River and found its way to church fundraisers and family gatherings. Fish muddles as they came to be known were cooked outdoors in big cast iron cauldrons over open fires. Traditionally only rockfish were used but as numbers have dwindled different white fish and even chicken has become a common replacement. Greater than the sum of its parts the simple list of ingredients is fish layered with sliced potatoes onions and spices in a cast-iron caldron and then gently simmered. Just before the muddle is served an egg is cracked into the rich fish broth.

Winter chowders and their cousins can be had from small roadside diners to fancy-pants restaurants and ski hills serving up steaming bowls of it.

Advice about creating an authentic chowder varies from only using North Atlantic haddock and cooking it in the potato water; or using lobster stock for the base; to only clam juice; salted pork not bacon; evaporated milk not cream; no herbs just a bay leaf and freshly cracked black pepper. All the cooks agree however that the crowning jewels are always the locally caught fish and shellfish — lobster scallops mussels oysters and clams.

This recipe for corn chowder is based upon and adapted from the recipe book “The Best of Shaker Cooking.” The recipe uses fresh corn which adds to the pale gold color and the subtle sweet flavor that you don’t get from canned corn. If you are making stock from scratch add the corncobs to impart depth and flavor. Good quality thick-cut bacon complements the sweet fresh corn and spices of cumin and turmeric add both color and subtlety.

In a heavy bottomed soup pot over medium heat add the diced bacon and cook until golden brown. Discard all but 1 tablespoon of the fat. Add the butter onion bell pepper cumin and turmeric and saute until the onion and pepper are tender. Add the corn potatoes and stock and bring to a boil. Reduce the heat and simmer for 30 minutes until the corn and potatoes are soft. Remove from the heat and stir in the cream. Add salt and pepper and adjust to taste. Allow the chowder to sit up to an hour allowing the chowder to cure and the flavors to combine. Reheat just before serving. Serve alongside freshly baked skillet corn bread.

This recipe is just a guide something to build on because a good chowder recipe is a personal process.

Melt the butter in a large soup pot add the bacon and onion and cook over medium heat until the onion begins to soften. Add clams and saute for 5 minutes. Add the stock wine clam juice potatoes salt pepper and bay leaf and bring to a boil. Reduce the heat and simmer covered until the potatoes are tender. Add the cream and thyme and stir. Add the lobster bring to a simmer over a medium heat and cook until lobster is done about 5 minutes. Add cayenne pepper and stir. Season to taste. Sprinkle with dill.