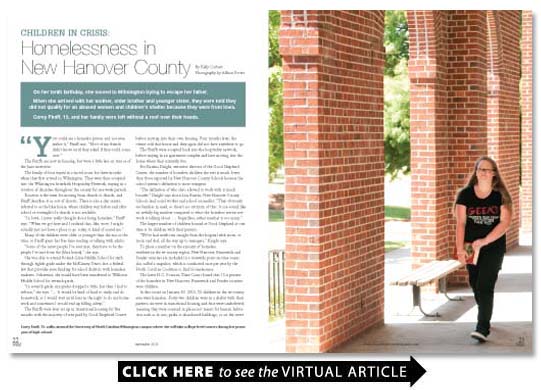 On her tenth birthday she moved to Wilmington trying to escape her father.

When she arrived with her mother older brother and younger sister they were told they did not qualify for an abused women and childrens shelter because they were from Iowa.

Corey Finiff 15 and her family were left without a roof over their heads.

You could see a homeless person and not even realize it Finiff says. Most of my friends didnt know until they asked if they could come over.

The Finiffs are now in housing but were a little late on rent as of the June interview.

The family of four stayed in a motel room for three months when they first arrived in Wilmington. They were then accepted into the Wilmington Interfaith Hospitality Network staying in a rotation of churches throughout the county for one-week periods.

Rotation is the term for moving from church to church and Finiff describes it as sort of chaotic. There is also a day center referred to as the blue house where children stay before and after school or overnight if a church is not available.

In Iowa I never really thought about being homeless Finiff says. When we got here and I realized that like wow I might actually just not have a place to go today it kind of scared me.

Many of the children were older or younger than she was at the time so Finiff spent her free time reading or talking with adults.

Some of the nicest people Ive ever met they have to be the people Ive met from the [blue house] she says.

She was able to attend Roland-Grise Middle School for sixth through eighth grade under the McKinney-Vento Act a federal law that provides state funding for school districts with homeless students. Otherwise she would have been transferred to Williston Middle School for seventh grade.

In seventh grade my grades dropped a little but then I had to refocus she says. It would be kind of hard to study and do homework so I would wait until later in the night to do my homework and sometimes I would end up falling asleep.

The Finiffs were later set up in transitional housing for five months with the majority of rent paid by Good Shepherd Center before moving into their own housing. Four months later the owner sold that house and they again did not have anywhere to go.

The Finiffs were accepted back into the hospitality network before staying in an apartment complex and later moving into the home where they currently live.

For Katrina Knight executive director of the Good Shepherd Center the number of homeless children she sees is much lower than those reported by New Hanover County Schools because the school systems definition is more stringent.

The definition of who shes allowed to work with is much broader Knight says about Lisa Burriss New Hanover County Schools lead social worker and school counsellor. They obviously are families in need so theres no criticism of that. It can sound like an awfully big number compared to what the homeless service network is talking about. Regardless either number is too many.

The largest number of children housed at Good Shepherd at one time is 16 children with their parents.

Weve had newborns straight from the hospital with mom or mom and dad all the way up to teenagers Knight says.

To place a number on the amount of homeless residents in the tri-county region New Hanover Brunswick and Pender counties are included in a statewide point-in-time count also called a snapshot which is conducted once per year by the North Carolina Coalition to End Homelessness.

The latest N.C. Point-in-Time Count found that 15.4 percent of the homeless in New Hanover Brunswick and Pender counties were children.

In this count on January 30 2013 52 children in the tri-county area were homeless. Forty-two children were in a shelter with their parents; six were in transitional housing and four were unsheltered meaning they were counted in places not meant for human habitation such as in cars parks or abandoned buildings or on the street or sidewalk. This was an 18.75 percent decrease from the February 2012 count.

Overall the numbers are coming down Knight says. Thats not to say there arent still a lot of folks including families with children who find themselves in housing crisis.

Understandably their hearts go out to the children Knight says adding that what she hears from people is that the children did not ask for or create the situation.

There are schools that write letters to parents saying Well we understand that you dont live at this address anymore. Your child cant come to our public school anymore she says.

Children staying in Good Shepherds shelter are picked up on the school bus first and dropped off last so other children do not know about their situation. But the shelter can also create a barrier for parents trying to discipline their children with no bedroom to be sent to for time out and no spanking rules.

The guilt and the shame and the feeling of personal failure that comes from not being able to keep a roof over your kids head its not something that you want to go and advertise to everybody or invite their judgment Knight says. Just because someones a social worker or a teacher or in a helping profession doesnt mean you might not feel judgment from them.

Along with the fear of judgment is the underlying fear that being homeless means someone could take the children away.

Ive seen a judge in another community threaten a mother with taking her children away just because they were in shelter but thats not the norm Knight says. Its sort of an egregious example of why people worry.

In August Finiff began her sophomore year at Isaac Bear Early College High School where she is taking junior and senior courses. She is completing her required volunteer hours and has already volunteered for the interfaith hospitality network.

Once her sophomore year is complete she will be finished with high school courses and will begin taking free courses through the University of North Carolina Wilmington.

She now wants to be the person who sits and talks with hospital patients to make them feel better.

She would tell someone who is now in a similar position to hers to focus on school be kind to her parents and only ask for necessities.

Even though you love your parents to death you dont want to be in the same place theyre at right now Finiff says. I mean lets face it a house is more important than a cell phone or a computer or new shoes.

There is no single definition for homelessness. Each social service agency may maintain a different definition.

US Department of Housing and Urban Development definition of homelessness: an individual who lacks a fixed regular and adequate nighttime residence; or an individual who has a primary nighttime residence that is: (1) a supervised publicly or privately operated shelter designed to provide temporary living accommodations (including welfare hotels congregate shelters and transitional housing for the mentally ill); (2) an institution that provides a temporary residence for individuals intended to be institutionalized; or (3) a public or private place not designed for or ordinarily used as a regular sleeping accommodation for human beings.

McKinney-Vento definition of Child/Youth homelessness: individuals who lack a fixed regular and adequate nighttime residence including: (1) children and youths who are sharing the housing of other persons due to loss of housing economic hardship or a similar reason; are living in motels hotels trailer parks or camping grounds due to the lack of alternative adequate accommodations; are living in emergency or transitional shelters; are abandoned in hospitals; or are awaiting foster care placement; (2) children and youths who have a primary nighttime residence that is a public or private place not designed for or ordinarily used as a regular sleeping accommodation for human beings; (3) children and youths who are living in cars parks public spaces abandoned buildings substandard housing bus or train stations or similar settings; and (4) migratory children.

The names and numbers change. The situations are different. But each year families with children live without adequate housing in New Hanover County.

The 1987 McKinney-Vento Homeless Assistance Act defines homelessness more broadly than the federal homelessness definition. The act which was originally documented in the 1980s and reauthorized in 2001 defines homeless children and youth as individuals who lack a fixed regular and adequate nighttime residence.

At the end of the 2012-13 school year 682 students were identified as eligible for assistance under McKinney-Vento in New Hanover County Schools.

Lisa Burriss New Hanover County Schools lead social worker and school counselor explains that the definition includes families doubled up with other families under one roof.

She describes these children as resilient.

The doubled up piece is a reality for a lot of families right now she says. They have a roof over their heads but oftentimes there are financial struggles that result in them needing to move back in with the grandparents or friends and it adds stress and strain on both families. This year we began seeing tripled up more than doubled up.

Through McKinney-Vento parents are able to choose whether their child stays at the school of origin or attends a new area school. Other needs like transportation clothing food and school supplies are met with the support of the federal grant money.

The program also helps keep students in school and on track to graduate working with credit hours online courses and summer programs.

Of the 682 students identified as homeless 403 were doubled up 155 were transitional 39 were staying in hotels or motels 29 were awaiting foster care 29 were in shelters and 27 were unaccompanied youth.

Yet Buriss says Our numbers the last couple of years have gone up over 700. But when they withdraw go to another county drop out this is the final number at the end of the year.

In May 2013 the largest proportion of 370 McKinney-Vento eligible students were in elementary schools. There were 166 middle school students and 135 high school students identified.

The number of pre-Kindergarten students is significantly lower at only five students identified because there was not a social worker at the pre-K level the last few years.

Similarly the number of overall identified students has also increased significantly since the 2009-10 school year with the creation of an intake process by counselors and social workers in the schools.

I dont think there were fewer students then Burriss says. I just think it was harder to find them. They may not have known about this resource. Now we have parents that call and say I think Im eligible for McKinney-Vento.

For the upcoming school year about 345 rising students will roll over into the program following an evaluation from the end of the previous school year.

Its hard to say what the numbers are. I dont feel like this is capturing everyone but we probably are doing a fairly decent job Burriss says. A question I hear a lot is Well how do you know theyre really needing this? Or how do you know theyre honest? There are people at all socioeconomic levels who sometimes arent truthful. But I think the key piece is do they need services? Do they need our help? Do they qualify? I think that sometimes because of the stigma that people are hesitant to be upfront about their situation.

School wide about 50 percent of students qualify for free and reduced lunch.

Impoverished communities sometimes surround the schools. But it is now becoming more common for families that have never experienced poverty or homelessness before to be included in the numbers.

Burriss says the community feeling about the homeless is often one of two things: either you got yourself there or how sad for you. Even though Wilmington is a resource-rich community she says the resources do not always connect well together to get people where they need to be.