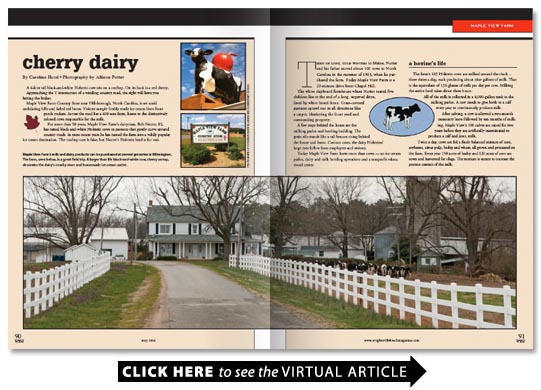 A 4-foot tall black-and-white Holstein cow sits on a rooftop. On its back is a red cherry.

Approaching the T intersection of a winding country road the sight will have you hitting the brakes.

For more than 50 years Maple View Farm s dairyman Bob Nutter 85 has raised black-and-white Holstein cows in pastures that gently curve around country roads. In more recent years he has turned the farm into a wildly popular ice cream destination. The rooftop cow is fake but Nutter s Holstein herd is for real.

tired of long cold winters in Maine Nutter and his father moved about 100 cows to North Carolina in the summer of 1963 when he purchased the farm. Today Maple View Farm is a 20-minute drive from Chapel Hill.

The white clapboard farmhouse where Nutter reared five children lies at the end of a long unpaved drive lined by white board fence. Grass-covered pastures sprawl out in all directions like a carpet blanketing the front yard and surrounding property.

A few steps behind the house are the milking parlor and bottling building. The grain silo stands like a tall beacon rising behind the house and barns. Curious cows the dairy Holsteins  large eyes follow farm employees and visitors.

The farm s 165 Holstein cows are milked around the clock ? three times a day each producing about nine gallons of milk. That is the equivalent of 136 glasses of milk per day per cow. Milking the entire herd takes about three hours.

All of the milk is collected in a 4 000-gallon tank in the milking parlor. A cow needs to give birth to a calf every year to continuously produce milk.

After calving a cow is allowed a two-month maternity leave followed by ten months of milking. Maple View s 100 calves are raised for two years before they are artificially inseminated to produce a calf and later milk.

Twice a day cows are fed a finely balanced mixture of corn soybeans citrus pulp barley and wheat all grown and processed on the farm. Every year 150 acres of barley and 130 acres of corn are sown and harvested for silage. The mixture is meant to increase the protein content of the milk.

cows have a very sensitive digestive system so feeding them the correct balance of silage is important to the taste of the milk Nutter says.

If a cow eats an onion weed their milk is going to taste like onions   Nutter says.

For 35 years Maple View sold its milk to co-ops for labels like Pine State Creamery in Raleigh and Long Meadow Dairy in Durham.

In 1996 the farm started bottling milk on site to make the business more profitable. Today the cows produce more than 2 million pounds of milk every year.

They bottle all of their milk — whole chocolate skim low-fat and buttermilk ?– in glass jars because Nutter believes it tastes better.

The glass bottles can be returned to the farm or a grocery store reducing landfill waste in the surrounding community. Maple View collects its bottles from stores to wash and reuse.

Since 2001 the Maple View Farm Country Store has offered freshly made ice cream to thousands of people. Starting with 12 flavors the store now offers hundreds of flavors rotating them based on the time of year.

The cheerful black-and-white tiles and antique ice cream scoops on display inside create a nostalgic and friendly atmosphere.

In the rear of the store ice cream makers churn a mixture of cream and sugar into hundreds of gallons of ice cream per week. Years of trial and error have produced a three-ring binder full of recipes for different ice cream flavors the store carries.

We had so much extra cream from the milk that we weren t using so we thought   why not make ice cream?   Nutter says.

One of the most popular flavors Carolina Crunch is flavored with Butterfinger bars Heath bars caramel bits and ribbons of caramel running through vanilla ice cream. In the spring and summer months the store carries flavors like peach raspberry ruffle and banana pudding.

Maple View ice cream is delivered to area grocery stores and sold in pints and gallons in its store.

Engaging and educating the local community about dairy farming the agriculture education center was opened in 2009 on the property. The 6 000-square-foot facility has four interactive learning labs where children explore plant life cycles the anatomy of insects and the dairy farm milking process.

It s very important for our customers to come and learn about the products they are using   says Allison Nichols-Clapper executive director of the Agricultural Center. Nichols-Clapper received her Master of Education from the University of North Carolina and develops the curriculum for the center.

School field trips to the center are designed to align with the North Carolina Standard Course of Study in science. Students hear presentations in the learning labs enjoy narrated hayrides around the property and greet the llama ponies ducks and other animals living at the center. Additionally parents may enroll their children in day- or week-long educational camps during the summer.

The facility tailors the curriculum to each season. In the fall one of the learning labs is focused on the life of a pumpkin — from seed to anatomy. In the winter hayrides with Santa and holiday lights are offered to children and families.

In the spring and summer months the learning labs focus on soil composition and water filtration. An emphasis is placed on recycling and composting as well as land conservation and sustainable agriculture.

The milking process laboratory is offered year-round taking children through the life of a Holstein cow teaching them about the bottling process milk and ice cream production.

Nichols-Clapper who grew up on a farm says the exposure to agriculture in a hands-on environment educates children about the importance of sustainable farming practices and community connectedness.

My dedication to Maple View is out of respect to Bob and to all farmers my grandparents our friends farmers everywhere Nichols-Clapper says.  Without farms we would be naked and hungry.