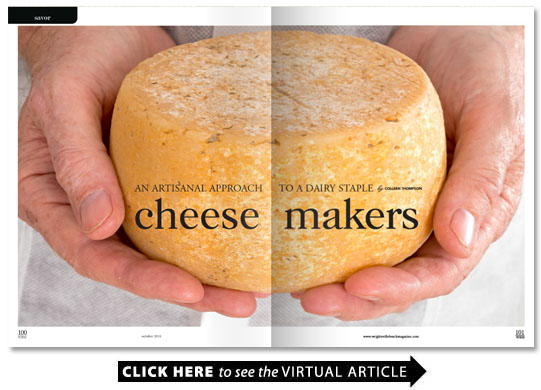 North Carolina is getting cheesier and cheesier. Over the past couple of decades our tastes have expanded from Monterey Jack and cheddar to include the delights of stinky nutty and moldy cheese. Terms like washed-rind alpine and mold-ripened have started to creep into our lexicon.

With a growing number of small artisanal farmhouse operations the region is occupying an ever-increasing slice of cheese counter space across the country.

Not only do consumers know where the milk comes from but they can rest assured that the cows and goats are selected nurtured fed and cared for to produce the best possible milk for cheese. The 29 stops on the North Carolina Cheese Trail link a group of North Carolina cheesemakers and cheesemongers from the mountains to the piedmont who joined together to promote artisan cheesemaking in the state. Each member creates different products carving a niche and gathering a loyal following along the way.

According to an ancient legend an Arabian merchant accidentally created cheese when he put his milk into a pouch made from a sheep’s stomach and set out on a journey across the desert. The rennet in the lining of the pouch combined with the heat of the sun caused the milk to separate into curds and whey. That night he found that the whey satisfied his thirst and the curd satisfied his hunger.

Cheesemaking became an ancient artisanal skill passed down through generations. It’s a complicated business demanding an understanding of history and tradition as well as precise microbiology and biochemistry fiddling with pH meters hygrometers and salinometers. Artisan cheesemakers bring a level of obsessiveness and a love of each step involved.

For the Love of Cheese

A deep love of the end product seems to be the motivating factor for artisan cheesemakers in North Carolina. Given the levels of complication involved in setting up a cheesemaking operation it’s certainly not because they saw it as a way of making a quick buck.

“I believe true artisan cheesemaking is where a skilled cheesemaker creates and ages delicious small batches of cheese from a local dairy herd [cow buffalo sheep or goat] allowing the seasonal and environmental variations in milk composition and flavor to be expressed in the cheese ” says Richard Nathan of Second Act Artisan Cheese in Raleigh. “The true artisan cheesemaker will tell a culinary story of the local terroir in their cheese including the local forage on which the animals graze local bacteria and mold that adds complexity and flavor to the cheese throughout the process. Artisan cheesemakers let the milk dictate how the cheese will be made and aged which invariably leads to variations in taste across the seasons.”

Nathan was a CPA and portfolio manager with an investment advisory firm before getting into the cheesemaking business.

“I started making cheese in my spare time as a serious hobby with the expectation that it might become a second career once I retired from my day job ” he says.

“I tend to make hard longer-aged cheeses primarily because I can control how long they are aged and to make sure they are eaten at the perfect time ” he says. “I also like to make cheeses that are difficult to find in the stores like English cloth-bound Cheddar aged Gouda English Red Leicester Tomme style cheese Stilton styles Manchego and Jack. The Dry Aged Jack is special because the rind is covered with an olive oil crushed coffee black pepper and crushed cacao rub. It’s extremely complex and flavorful because of the rind.”

He started Second Act Artisan Cheese three years ago with the goal of offering cheesemaking workshops to hobbyists and foodies interested in learning more about artisan cheesemaking. It turns out that you don’t need a bunch of expensive equipment to make really good cheese in your own kitchen — just a little motivation knowledge and practice.

“My goal was to raise awareness in the area about all the artisan cheeses made by local cheese producers in North Carolina ” Nathan says. “I’ve found that once people try making cheese for themselves they develop an appreciation for the different cheeses available from local cheesemakers.”

Nathan’s thinking was well-timed as the state’s burgeoning cheesemakers are gaining recognition and gathering a loyal following. Each cheese is an expression of the farm it comes from — the link between flora fauna soil and milk is integral to cheesemaking.

Their care and dedication has always been the driving force behind the creamery’s ethos.

“We committed to healthy happy cows from the beginning ” McKnight says. “We are certified by Animal Welfare Approved which is the most stringent of the farm animal welfare certification programs. My favorite cow — don’t tell the others — is Andrea. She is named after Andrea Reusing of Lantern Restaurant and The Durham. She was born in March of 2007 daughter of Audrey granddaughter of Allison and great granddaughter of Miss Ada our original cow. Andrea has been affectionate and playful since she was a calf. She’s especially photogenic and loves to have her picture taken.”

The herd has grown to 30 grass-fed cows that have rewarded them greatly. Chapel Hill Creamery’s selection of seven cheeses is a testament to that.

“We have a core list of four cheeses: Carolina Moon a Camembert-style cheese; Calvander inspired by Asiago; Hickory Grove a silky meltable monastery style cheese; and fresh mozzarella which is a summertime feature ” McKnight says.

Calvander — named after a crossroads where a 19th-century schoolhouse sits — has gone on to win three Best in Show prizes at the North Carolina State Fair as well as a World Jersey Cheese Award and a North American Jersey Cheese Award.

“Cheese is an incredibly fascinating food because milk is almost 100 percent of the composition but there are so many different cheeses that can be made from that one ingredient ” McKnight says. “As we explored the possibility of cheesemaking we found it compelling to start from the ground up from the sun and soil building our herd health and creating outstanding milk quality to ultimately make great cheese.”

A Taste of Italy in North Carolina

A fantasy life of owning a farm and making cheese of calm sunshiny days bleating goats and an endless supply of chevre is lived out in the real world by brother and sister duo Austin and Samantha Genke.

Just north of Hillsborough over rolling hills past pine groves and wild persimmon trees stretches Carr Store Road in Cedar Grove. This is where the Genkes co-own and operate Boxcarr Handmade Cheese.

The siblings were born and raised in Vero Beach Florida. Austin headed to The Culinary Institute of America in Hyde Park New York then to Las Vegas to work in restaurants at MGM Grand and The Venetian.

Samantha headed to North Carolina where she spent a decade learning the art of cheesemaking at Goat Lady Dairy and later Chapel Hill Creamery.

Longing for country life Austin and his wife Dani bought a small farm to raise chickens and plant vegetables. Samantha lived across the road and raised goats.

“We started a food truck and catering company using our own produce and meat and we did it while holding down ‘real’ jobs to realize our ultimate goal: making and selling handcrafted artisan cheese ” Austin Genke says. “In April 2014 we broke ground on a 2 900-square-foot cheesemaking facility and started making cheese in early 2015.”

They arranged to source milk from other small farms: Jersey and Holstein cows’ milk from a neighbor and Alpine Nubian and Sannen goats’ milk from a friend’s farm. Inspired by their family roots in Piedmont and Sicily they set out to make Italian-inspired farmstead cheeses. Samantha and longtime friend Alessandra Trompeo a cheesemaker from Northern Italy traveled to Alessandra’s birthplace to study different styles of cheese spending months experimenting and taste testing.

Samantha now produces cheese modeled on Northern Italian types like Robiola and Taleggio using a unique selection of cultures. Their handcrafted cheeses are catching the attention of patrons beyond the boundaries of the Tar Heel State finding their way to New York Chicago and San Francisco.

Boxcarr now produces nine different varieties of cheese some of which are seasonal. Their top-selling varieties include Cottonseed a Scimudin-inspired mixed cow and goat’s milk with a pale pink rind and a full-bodied creamy center; Rocket’s Robiola named after one of their goats a silky cow’s milk cheese with an ash-dusted rind and hints of almond and mushroom; and Lissome washed in Piedmontese birra from Clan!Destino a rich melt-in-your-mouth cheese. Almost all of their cheeses have gone on to win awards from the North Carolina State Fair the American Cheese Society and the Good Food Awards.

As we evolve as consumers and buzzwords like artisan locavore and craft become monikers for quality we can’t resist applauding anyone wanting to make fresher healthier better-tasting food taking entrepreneurial risks and seeking meaning in one’s work. Our cheesemakers are a wonderful microcosm of this trend.