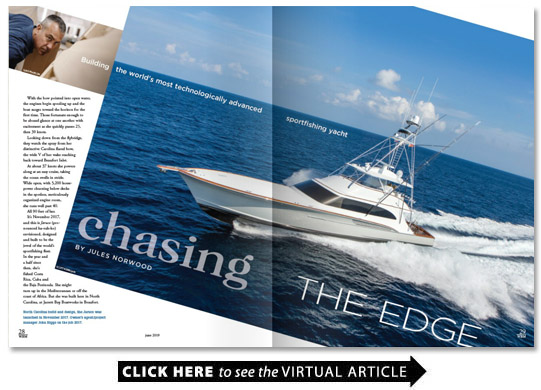 With the bow pointed into open water the engines begin spooling up and the boat surges toward the horizon for the first time. Those fortunate enough to be aboard glance at one another with excitement as she quickly passes 25 then 30 knots.

Looking down from the flybridge they watch the spray from her distinctive Carolina flared bow the wide V of her wake reaching back toward Beaufort Inlet.

At about 37 knots she powers along at an easy cruise taking the ocean swells in stride. Wide open with 5 200 horsepower churning below decks in the spotless meticulously organized engine room she runs well past 40.

It’s November 2017 and this is Jaruco (pronounced ha-ruh-ko) envisioned designed and built to be the jewel of the world’s sportfishing fleet. In the year and a half since then she’s fished Costa Rica Cuba and the Baja Peninsula. She might turn up in the Mediterranean or off the coast of Africa. But she was built here in North Carolina at Jarrett Bay Boatworks in Beaufort.

“Every day I’m just thankful to have been a part of it and to have that trust from the owner ” says Wrightsville Beach’s John Riggs who was the boats owner’s agent/project manager. That first ride “was somewhat emotional ” he says.

Riggs a boat broker now with his own brokerage is a third-generation fisherman who helped his father and grandfather on their commercial boats in coastal North Carolina as far back as he can remember.

“Growing up on old single-screw charter boats and commercial boats I wanted to get into building boats and designing boats ” he says. “I lived in Harkers Island beside a boatbuilder ? and told him I was going to go to school to draw and design ’em and come back and we were going to change the world.”

That plan changed and evolved but Riggs did stay involved with boating and fishing eventually helping launch a brokerage in Wrightsville Beach in 1998. He’s helped countless owners buy sell upgrade and fish their boats — and even helped with a few builds.

And then he took a new client a referral who ended up buying a boat that had a famous former owner.

“We bought the old Day Money which was built for (country music singer songwriter) George Strait a 78 Garlington and did a massive refit on that boat ” Riggs says.

He and the buyer worked on the boat they fished it. But deep down it was still someone else’s boat. Riggs suggested a custom build.

“And he says ‘No I’m not building a boat ‘ ” explains Riggs.

But time passed and a vision took form.

The client now a friend dreamed big — of building something special something that could run fast and far efficiently and comfortably and still maneuver on a fish like the smaller boats that were once the norm in the sportfishing fleet. They started talking to boatbuilders telling them about the idea and asking them if they were interested in doing the project. Asking them whether they could do the project and what the timeframe would be.

“And it came back to doing it right here in North Carolina with Randy (Ramsey owner of Jarrett Bay Boatworks) ” Riggs says. “We had a conversation during the Fort Lauderdale Boat Show and explained to him face-to-face what we were trying to build. And he said ‘I’d love to do it.’ “

At her size and available power — MTU’s 2600-horsepower M96L diesels were the most powerful marine units on the market — she’d have to be light to achieve the speed the team was looking for. Light as in 25 percent lighter than Jarrett Bay’s weight estimates for its usual construction materials and methods but still strong to withstand the pounding a boat can take at sea.

“We were looking to pull about 40 000 pounds out compared to our typical build which is pretty dramatic ” Ramsey says. The hull itself is cold-molded — wood sheathed inside fiberglass and Kevlar But nearly everything else is carbon fiber.

Using carbon fiber says Jim Gardiner of Washington N.C.’s Compmillennia can reduce the weight of a component by 30 to 50 percent. Compmillennia created molds and laid up parts for the boat including deck soles the cabin house and hardtop and the inboard 86-foot-long stringers that run from bow to stern tabbed inside the hull for strength and structure.

Riggs gestures at the flybridge. “The helm chairs the mezzanine seating basically everything on the bridge deck besides those cushions is carbon fiber.”

“I was joking one day and said I’d heard about these carbon fiber toilets ” Riggs says. They made it into the build along with carbon composite sinks bulkheads and stringers. Some wood furniture the hull bottom and teak decking in the cockpit accounts for almost all the wood in the boat. “If you start stacking lumber on it that’s just adding weight.”

The propeller shafts are titanium something Ramsey says had never been done before.

The team enlisted help from near — design work by Alex McCarley of Wilmington and composite components from Washington — and far as with engineers from Michigan and Maryland. Hull shapes were tank-tested in Amsterdam.

With so many facets of the project the owner — a doctor an engineer and an entrepreneur — needed someone close to the action while the design and build took shape in Beaufort.

“So we would have meetings on the telephone as he’s traveling and I’m at Jarrett Bay ” Riggs says. “A day two days three days a week I was up there for almost four years.”

What’s so different about Jaruco?

Riggs shakes his head and laughs. “It’s the whole boat ” he says. “You know other than paint and cushions. It has those.”

The boat is as much as 50 000 pounds lighter than the competition and runs more than 10 miles an hour faster Ramsey says.

Every decision was carefully considered and many ideas were scrapped including a four-engine 96-foot design with custom gearboxes to run each pair of engines on a single shaft.

The stone and marble countertops have been honed down to a fraction of an inch and backed with honeycomb aluminum — to save weight of course. There are no window shades — at the touch of a switch the exterior glass blacks out. There’s an AV room with enough electronic gear to need its own cooling unit.

To allow access to the full-beam master stateroom and full-beam crew quarters there’s a trick piece of cabinetry hiding a stairwell so that crew can come and go without having to go outside and through the engine room.

Below the surface every shape and contour was tested for how it affects the flow of water resulting in waveform rudders that account for the way water spins coming off the propellers helping to reduce drag. The team has even designed and tested a T-foil that provides lift under the bow keeping her trimmed up as speeds increase.

To ensure the maneuverability to back down on a sailfish she has V-drives allowing a shallower shaft angle which gives the boat less draft and reduces the effect of the stern being pulled down in reverse.

When it comes down to it it’s the weight Riggs says. “That’s how we got the speed. Thirty-seven knots cruising in a 90-foot boat with a tower that goes to the sky. There’s nothing that can touch it in this size.”

In her first tournament the Los Suenos Triple Crown in Costa Rica Jaruco made the podium. She’s fished the Custom Shootout in the Bahamas and the Ernest Hemingway Tournament in Cuba a homecoming of sorts for the owner whose family hails from the island country. The boat is named for the small town his father called home.

At the dock the boat is a star in her own right. Everyone on the sportfishing circuit has heard of her.

“You can’t keep enough Jaruco T-shirts on board ” Riggs says. “Everyone wants to be a part of it.”

As for the owner and how he likes his boat Riggs says his response to that first trip was incredible. “He flipped out. It was overwhelming for him to be able to achieve the speeds that we were able to get with the power that we were given. He’s tickled to death with it. There’s nothing out there that’s been constructed like this boat.”

With more than 1 300 hours now logged on the engines and half a dozen tournaments under the belt he’s still chasing new ways to make Jaruco even quicker and more efficient to get out there in less time to move to the next spot more swiftly and just to have the best fastest fishing machine on the planet.