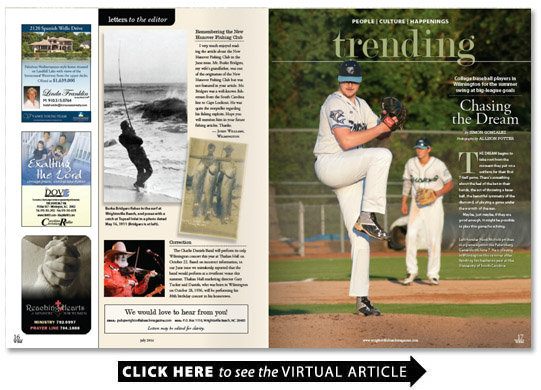 The dream begins to take root from the moment they put on a uniform for their first T-ball game. There’s something about the feel of the bat in their hands the act of throwing a baseball the beautiful symmetry of the diamond of playing a game under the warmth of the sun.

Maybe just maybe if they are good enough it might be possible to play this game for a living.

“Growing up from about age 5 everybody wants to play professional baseball ” Cletis Avery says.

Avery’s dream is still alive. He’s a shortstop for the Wilmington Sharks a team that competes in the Coastal Plain League. He is playing in Wilmington this summer after finishing his junior season at Presbyterian College in Atlanta.

“Of course I have aspirations of playing professional baseball ” Avery says. “I have a couple of friends that got drafted. It gives you motivation. This is chasing the dream working every day to try to get there.”

The Sharks are one of 16 teams playing in the summer league that extends from Virginia to Georgia. All are made up of college players — amateurs who hope to go pro someday.

The league has been around since 1997 and boasts some success stories. More than 1 300 former players have been drafted by Major League teams and 81 of them have made it to the majors. The alumni include 2011 Cy Young winner Justin Verlander and standouts Ryan Zimmerman and Kevin Youkilis. Russell Wilson a highly regarded baseball prospect before becoming a Super Bowl-winning quarterback played in the CPL. Cal Quantrill who pitched for Morehead City in 2014 was the eighth overall pick in this year’s draft.

They also know they face extremely long odds of making the dream come true. Each year there are about 140 000 players eligible to be selected in the annual professional draft. Only 1 500 are chosen. Even after getting drafted it remains a long shot. Only about 10 percent of all minor-leaguers ever make it to the Show.

Sharks players have already overcome significant odds just to make it to college ball. An organization called High School Baseball Web says only one high school player in every 10 has a chance to play in college. So they don’t dwell on the numbers game that seems to be stacked against them.

“I don’t think about that ” says Sharks third baseman Alec Bohm. “All I can do is just play the game and see what happens.”

Encouragement comes from their coach Scott Wingo. He was selected by the Los Angeles Dodgers in the 11th round of the 2011 draft after a stellar career at the University of South Carolina capped by a national championship and the Most Outstanding Player award at the2011 College World Series.

He was in the Dodgers’ minor-league system for three years and clearly remembers motivational talks delivered each season by former big-league manager Tommy Lasorda.

Grant Koch a catcher who will be returning to the University of Arkansas as a sophomore in the fall buys into the coach’s pep talk about hard work.

“The odds are not something I worry about ” he says. “I try to be more focused on what I can do to get better. You have to work even harder to get to the next level. Success would be having the right attitude every day having a positive attitude and not taking a day off. It would be me getting better and improving as a player all-around.”

As college players the Sharks are amateurs which means no paycheck. The only reward is “two bats two uniforms a place to live and we guarantee them a really good meal when the game’s over ” Hutchins says.

This summer instead of taking a break after their collegiate seasons the Sharks players will endure long bus rides and sweltering heat to cram a lot of games into a short period of time.

Bohm in Wilmington after playing in 51 games as a freshman for Wichita State says it’s worth it.

“It’s important for developing and continuing to play at a high level against top competition. I didn’t want to take the summer off and then start back over ” Bohm says. “It’s not too bad. It’s like a minor-league short season. It’s still a lot of fun. I just want to play every day get a lot of at-bats and become a better player.”

Like the players their coach is chasing a dream too. Wingo’s hopes of making it to the majors were dashed when the Dodgers released him in 2014 but all that did was shift his focus.

“I definitely dream of being a head coach in college baseball ” he says. “That’s my goal. I was the kind of player that laid it on the line every time I played. I feel that I owe it back to these kids that I would like to show them and try to teach them how I played the game. It was successful for me and hopefully it can translate to them.”

He returned to his alma mater as a student assistant coach for the 2015 season. That summer he served as the Sharks’ assistant coach. Last season he was an assistant coach at North Greenville University in South Carolina where he is pursuing a master’s degree.

He returned to Wilmington this summer this time as the guy in charge.

“This is my first season as head coach ” he says. “It’s a big learning experience and hopefully will help me grow as a coach.”

“It all started with Derek Jeter ” she says.

When she was playing basketball in the fourth grade she inked the Yankees shortstop’s No. 2 on her shoes.

“I’d always had an interest but it didn’t pique until high school ” she says. “I started to manage my high school team in the 11th grade. I thought ‘This is fun.’ I love baseball.”

She went on to become the first female manager at James Madison University in Virginia. She interned with the Sharks while in college and was hired as assistant GM when she graduated with a sports and recreation degree in 2015.

“Chasing my dream will be working up to the major leagues at some level hopefully in the front office hopefully with the Yankees ” she says. “My next step will hopefully be the minor leagues. I want to use the experience and knowledge and work my way up. I love the promotional stuff and working with the fans.”