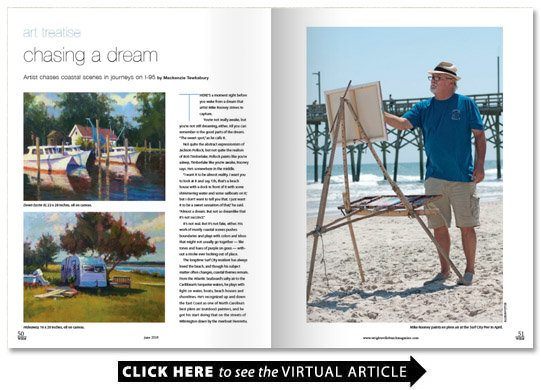 There’s a moment right before you wake from a dream that artist Mike Rooney strives to capture.

You’re not really awake but you’re not still dreaming either. All you can remember is the good parts of the dream. “The sweet spot ” as he calls it.

“I want it to be almost reality. I want you to look at it and say ‘Oh that’s a beach house with a dock in front of it with some shimmering water and some sailboats on it ‘ but I don’t want to tell you that. I just want it to be a sweet sensation of that ” he said. “Almost a dream. But not so dreamlike that it’s not succinct.”

It’s not real. But it’s not fake either. His work of mostly coastal scenes pushes boundaries and plays with colors and ideas that might not usually go together — like tones and hues of purple on grass — without a stroke ever looking out of place.

The longtime Surf City resident has always loved the beach and though his subject matter often changes coastal themes remain. From the Atlantic Seaboard’s salty air to the Caribbean’s turquoise waters he plays with light on water boats beach houses and shorelines. He’s recognized up and down the East Coast as one of North Carolina’s best plein air (outdoor) painters and he got his start doing that on the streets of Wilmington down by the riverboat Henrietta.

He started painting outside for pure functionality; he wanted people to see his work so he thought he’d paint where the people are. People came up to him often to start a conversation and buy his work so for a while it just made sense. Most of the time things went as planned but painting in public often came with territories both good and bad.

“Some days are great and you’re out there painting on the waterfront at Morehead (City) out at Captain Bill’s and the sun is out and the seagulls are squawking and you just think to yourself life doesn’t get any better than this and then the next day you’re getting in trouble ” he said. “It’s an exciting life.”

But before Rooney was a successful full-time plein air painter life looked a bit different. He was immersed in art but he spent a bit less time on the highway and in his car. He ran a homeless shelter and ran a business making signs on the side working half the day at the homeless shelter and painting signs for the other half. He soon gave up the sign business continued at the homeless shelter for half a day and started painting for the other half. After 13 years he gave up the homeless shelter to go full time with his art. He continued to paint outside but when he outgrew his on-the-street sales he put his art into galleries. New Elements Gallery in Wilmington was the first gallery he remembers. But that wouldn’t be enough so he began to travel.

“Where do I want to go? Somewhere really warm in the winter. Let’s pick Key West. Got into galleries there. OK it’s really hot in the summer where can I go that’s cool? Oh how about Cape Cod. Rode up to Cape Cod got into galleries up there got well known up there ” he said. The travel came with a learning curve because with an almost 2 000-mile route each art culture and community has different styles and tastes. But Rooney took it in stride staying true to style but figuring out what types of things would sell and where. He was even featured on the cover of Cape Cod Magazine. “Which ” he says “is pretty good for someone who says y’all.”

While his is an exciting life he asserts it isn’t always one filled with sunshine and palm trees. Most days are spent fighting the weather and the sun most weeks are spent working every single day. He rarely takes a full day off and he has spent hours in his car riding up and down a concrete interstate chasing a good coastal scene.

But Rooney didn’t want to do anything else. He’d often take the good with bad. Painting outside was his niche; he cut his teeth there spending nearly dozens of years painting on street corners and oceanfronts every single day. He was never in the studio and even had a bunch of jokes for artists who only painted in-studio. Although he’s recently found an unexpected joy of painting in his studio his work still carries his distinct and unmistakable voice channeling the dreamlike style of the great outdoors he has developed.

He has also brought his painting experience techniques and knowledge outside the studio and into the classroom leading workshops up and down the East Coast and beyond. He shares his own style while also teaching both novice and experienced painters how to manifest their own personal trademark.

But even as he spends more and more time teaching he never lets his own art get too far away. A lifelong artist and entrepreneur — he drew on his friends’ notebooks for money in sixth grade — he says his career path was less of choice and more of necessity.

“I was at the hospital with my son and… sitting in the hospital. I don’t have any of my stuff with me. I was on day three. I was literally drawing things in the hospital room. I was drawing them and painting with my mind ” he explains. “I have to paint I have to create something or I’d go crazy. And also I make a living doing it. So I have to.”