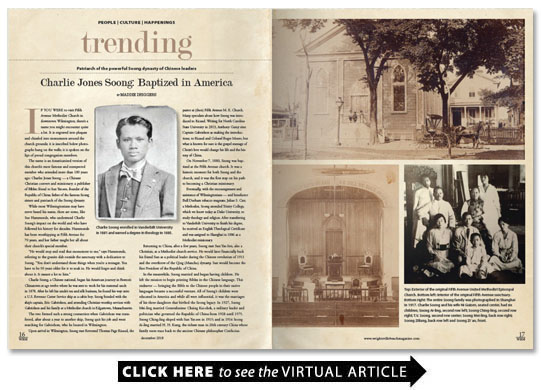 If you were to visit Fifth Avenue Methodist Church in downtown Wilmington there’s a name you might encounter quite a lot. It is engraved into plaques and chiseled into monuments around the church grounds; it is inscribed below photographs hung on the walls; it is spoken on the lips of proud congregation members.

The name is an Americanized version of this church’s most famous and unexpected member who attended more than 100 years ago: Charles Jones Soong — a Chinese Christian convert and missionary; a publisher of Bibles; friend to Sun Yat-sen founder of the Republic of China; father of the famous Soong sisters and patriarch of the Soong dynasty.

While most Wilmingtonians may have never heard his name there are some like Sue Hammonds who understand Charlie Soong’s impact on the world and who have followed his history for decades. Hammonds has been worshipping at Fifth Avenue for 70 years and her father taught her all about their church’s special member.

“He would stop and read that monument to me ” says Hammonds referring to the granite slab outside the sanctuary with a dedication to Soong. “You don’t understand those things when you’re a teenager. You have to be 50 years older for it to soak in. He would linger and think about it. It meant a lot to him.”

Charlie Soong a Chinese national began his American journey in Boston’s Chinatown at age twelve where he was sent to work for his maternal uncle in 1878. After he left his uncle’s tea and silk business he found his way onto a U.S. Revenue Cutter Service ship as a cabin boy. Soong bonded with the ship’s captain Eric Gabrielson and attending Christian worship services with Gabrielson and his family at a Methodist church in Edgartown Massachusetts.

The two formed such a strong connection when Gabrielson was transferred after about a year to another ship Soong quit his job and went searching for Gabrielson who he located in Wilmington.

Upon arrival in Wilmington Soong met Reverend Thomas Page Ricaud the pastor at (then) Fifth Avenue M. E. Church. Many speculate about how Soong was introduced to Ricaud. Writing for North Carolina State University in 2013 Anthony Gutay sites Captain Gabrielson as making the introductions to Ricaud and Colonel Roger Moore but what is known for sure is the gospel message of Christ’s love would change his life and the history of China.

On November 7 1880 Soong was baptized at the Fifth Avenue church. It was a historic moment for both Soong and the church and it was the first step on his path to becoming a Christian missionary.

Eventually with the encouragement and assistance of Wilmingtonians — and benefactor Bull Durham tobacco magnate Julian S. Carr a Methodist Soong attended Trinity College which we know today as Duke University to study theology and religion. After transferring to Vanderbilt University to finish his degree he received an English Theological Certificate and was assigned to Shanghai in 1886 as a Methodist missionary.

Returning to China after a few years Soong met Sun Yat-Sen also a Christian at a Methodist church service. He would later financially back his friend Sun as a political leader during the Chinese revolution of 1911 and the overthrow of the Qing (Manchu) dynasty. Sun would become the first President of the Republic of China.

In the meanwhile Soong married and began having children. He left the mission to begin printing Bibles in the Chinese language. This endeavor — bringing the Bible to the Chinese people in their native languages became a successful venture. All of Soong’s children were educated in America and while all were influential it was the marriages of his three daughters that birthed the Soong legacy. In 1927 Soong Mei-ling married Generalissimo Chaing Kai-shek a military leader and politician who governed the Republic of China from 1928 until 1975. Soong Ching-ling eloped with Sun Yat-sen in 1915; and in 1914 Soong Ai-ling married H. H. Kung the richest man in 20th century China whose family roots trace back to the ancient Chinese philosopher Confucius.

Today the story and legacy of Charlie Soong is still felt within the walls of Fifth Avenue Methodist. The fellowship hall where the congregation enjoys refreshments after the Sunday service is named for him; the hall was dedicated in 1921 just three years after Soong’s death.

Remembering the history was so important to Hammonds and her family that she took over the job of church historian in 1993 and has held the position ever since.

“I just kept waiting for somebody else to be the historian and nobody ever did so I started keeping up with the records ” she says. “I grew up with it. I thought everybody knew it but they don’t. So as many people as I can tell I’ll be glad to do it.”

Hammonds’ passion for the Soong family and its history has taken her halfway around the world — she visited China in 2015. In the three weeks she was there she toured Soong’s home visited his grave and made stops in major cities that had museums and monuments dedicated to Soong and his family.

“It was overwhelming to me ” she said. “I’m still not down off of cloud nine.”

Back at home her greatest joy is sharing the history of Charlie Soong with anyone who walks through the church doors. No matter if she is just arriving or on her way out if someone asks she says she always has time to tell people all about what makes this Wilmington sanctuary so special to her.

“He was our most famous member. Who would know when he was baptized that he would become the head of the Soong dynasty?” Hammonds says. “It doesn’t get in the way of our religion. In fact I think it enhances our church.”