CEO of the ABC 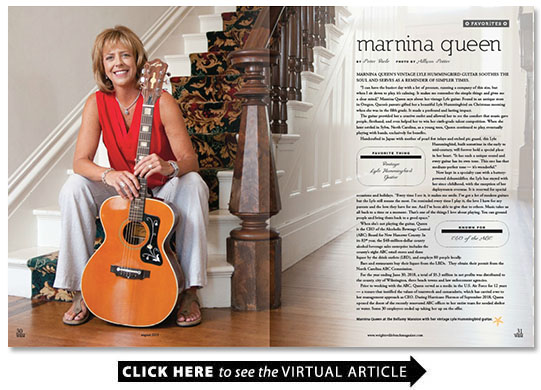 Known For: CEO of the ABC

“I can have the busiest day with a lot of pressure running a company of this size but when I sit down to play it’s calming. It makes me remember the simple things and gives me a clear mind ” Marnina Queen says about her vintage Lyle guitar. Found in an antique store in Oregon Queen’s parents gifted her a beautiful Lyle Hummingbird on Christmas morning when she was in the fifth grade. It made a profound and lasting impact.

The guitar provided her a creative outlet and allowed her to see the comfort that music gave people firsthand and even helped her to win her sixth-grade talent competition. When she later settled in Sylva North Carolina as a young teen Queen continued to play eventually playing with bands exclusively for benefits.

Handcrafted in Japan with mother of pearl fret inlays and etched pic guard this Lyle Hummingbird built sometime in the early to mid-century will forever hold a special place in her heart. “It has such a unique sound and every guitar has its own tone. This one has that medium-perfect tone — it’s wonderful.”

Now kept in a specialty case with a battery-powered dehumidifier the Lyle has stayed with her since childhood with the exception of her deployments overseas. It is reserved for special occasions and holidays. “Every time I see it it makes me smile. I’ve got a lot of modern guitars but the Lyle still means the most. I’m reminded every time I play it the love I have for my parents and the love they have for me. And I’ve been able to give that to others. Music takes us all back to a time or a moment. That’s one of the things I love about playing. You can ground people and bring them back to a good space.”

When she’s not playing the guitar Queen is the CEO of the Alcoholic Beverage Control (ABC) Board for New Hanover County. In its 83rd year the $48-million-dollar county alcohol beverage sales enterprise includes the county’s eight ABC retail stores and three liquor by the drink outlets (LBD) and employs 80 people locally.

Bars and restaurants buy their liquor from the LBDs. They obtain their permit from the North Carolina ABC Commission.

For the year ending June 30 2018 a total of $5.3 million in net profits was distributed to the county city of Wilmington three beach towns and law enforcement agencies.

Prior to working with the ABC Queen served as a medic in the U.S. Air Force for 12 years — a tenure that instilled the values of teamwork and camaraderie which has carried over to her management approach as CEO. During Hurricane Florence of September 2018 Queen opened the doors of the recently renovated ABC offices to her entire team for needed shelter or water. Some 30 employees ended up taking her up on the offer.