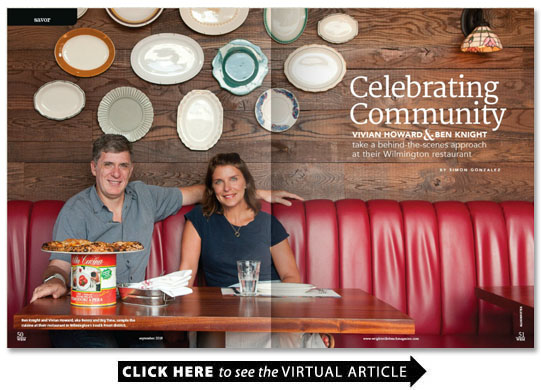 The couple sits at a back table in Benny’s Big Time Pizzeria the Italian eatery in Wilmington’s up-and-coming South Front district surrounded by several plates of food — two or three pizzas some appetizers a few pasta dishes.

It’s not so much that they have a big appetite. This visit isn’t driven by hunger. It’s about quality control.

The couple are the owners Benny and Big Time themselves.

“Ben his nickname has been Benny among his friends forever and we also thought that sounded kind of Italian ” Howard says intentionally exaggerating her Southern accent to mispronounce the first syllable as ‘eye.’ “And my dad’s nickname for me has always been Big Time.”

Papa Howard proved to be prescient because his daughter is nothing if not Big Time. She’s the creator and star of the Emmy-award winning PBS show “A Chef’s Life ” often set in Chef & the Farmer the couple’s destination restaurant in Kinston. She’s the author of “Deep Run Roots ” a 600-page best-selling and critically acclaimed cookbook/memoir that celebrates Southern food and culture.

“He calls me High Rent now ” she says.

It’s about 5 p.m. and the dinner crowd is trickling in. A couple of patrons recognize them from “A Chef’s Life” and wander over to say hi. But for the most part they go unrecognized.

And that’s OK. It’s more important that they taste the food than sign autographs. It’s the former that will give the restaurant staying power rather than the fleeting nature of fame.

“We wanted to open a restaurant in a community that was growing without my celebrity as the catalyst ” Howard says. “We wanted to do something in a town we wanted to spend more time in and Wilmington has a lot going for it. The population is growing; it’s on the coast. It can support more quality restaurants. That really has nothing to do with me being on TV.”

Inside the historic walls there are no clues to the famous owners’ identities. No photos of them no references on the menu not even any of Knight’s artwork. That’s by design. They want people to come — and to come back — because of the ambience and the cuisine.

“We wanted to put together a restaurant that people can enjoy coming to with their kids for maybe longer than a generation ” Knight says. “It’s not really about the here and now as much as it is about something that has staying power.”

Benny’s Big Time is the couple’s third restaurant but their first outside Kinston near Vivian’s hometown of Deep Run. It’s the first not centered around Southern traditions.

“As restaurateurs our interests lie more with the style of restaurants that we like that have the neighborhood or community feel where regulars are recognized ” Knight says. “That was one of the reasons why we chose to do Italian a pizza place.”

The choice of South Front was intentional too. The area is rich in history — the restaurant is in part of the old Block Shirt Factory — but is being redeveloped with an eye to the future (see “Reclaiming History ” May 2018 WBM).

“We’re drawn to emerging neighborhoods ” Howard says. “We see great potential right here. Maybe we’re one of the pioneers here but I think based on us being here and being somewhat successful more businesses will open here.”

Being a pioneer is risky. They could see the potential in an emerging area but there was some uncertainty when Benny’s Big Time opened in December 2017.

“We didn’t know what to think having only opened restaurants in Kinston ” Howard says. “We didn’t have a template that relates to anywhere else.”

Even so it’s probably fair to say that if Benny and Big Time did have expectations they would have been exceeded.

“The opening was extraordinarily busy ” Knight says. “We thought it was fantastic to be so well received. At the same time there were long waits and when folks have to be here two hours for a table that’s a long time. We’ve settled into more of a pattern. There’s not a wait every night but we are full for an extended period which is great. And the reviews keep getting more and more positive. The majority of the (patron) reviews are 5-star reviews acknowledging an experience we’re trying to provide.”

Knight makes the 90-or-so-mile drive from Kinston south to Wilmington at least once a week. Howard tries to do that too — when she’s not busy with the TV show book tours Chef & the Farmer the Boiler Room (their second restaurant in Kinston) their food truck working on her second book or simply being a mom to their twins.

“Ben is incredibly hands-on ” she says. “I’m hands-on when I’m here. I travel quite a lot for show purposes. The Chef & the Farmer needs us and people want to see us there. It’s our I guess first child.”

One place she won’t be when she makes it to Wilmington is in the kitchen cooking that night’s food.

“I don’t do everything ” she says. “I try to be completely transparent about that. When chefs have multiple restaurants with different menus you cannot expect that person is in the kitchen all the time. For this place I give all of the credit to Ben and Jim and our management team here. I inspire the spirit of the place but that’s really all I’m able to do.”

Jim is executive chef Jim Diecchio who has creative license to create the menu — “I want to have a chef not a kitchen manager ” Howard says — but always with the approval of his high-profile bosses.

“It’s mine with their influence and guidance of what they want ” he says. “They let me have free range. But you always have that kind of pressure of living up to someone else’s reputation.”

Howard made her reputation at Chef & the Farmer by crafting creative dishes rooted in her Southern heritage — Flash Fried Collards Guilford Mills Grits with pimento cheese. Benny’s menu features the likes of wood-fired pizza ravioli bucatini risotto and spiedini. But Howard’s North Carolina roots show up here and there in the Cacio E Pepe Hushpuppies and Southern Fried Chicken Parm with hot honey.

“Some of our dishes here there’s maybe a Southern influence to [them] ” Diecchio says. “Our chicken parm is a good example of that. It’s got chicken it’s got parm but it’s not what anybody thinks of a chicken parm. Vivian’s always been into the whole hot honey thing. That dish kind of shows that kind of balance our concept and her reputation.”

Chef & the Farmer is noted for using ingredients from local farmers. Knight and Howard made the risky move from New York to open a high-end restaurant in her rural North Carolina home in large part because they hoped to revitalize downtown Kinston and transition former tobacco farms to food farms.

Benny’s Big Time might be more European than Southern but the same farm-to-table emphasis carries over.

“Absolutely ” Howard says. “Jim sources quite a bit. All the fish herbs pork lots of the vegetables. When we serve poultry that’s from a local farm.”

Benny and Big Time sample some of the food in front of them as the restaurant fills up. Everything tastes good — a metaphor of sorts for their life.

They have three successful restaurants and a bakery coming to Kinston. “A Chef’s Life” is ending after five seasons but a new show with the working title of “South By Somewhere” is in the works.

After the initial culture shock of making the “Green Acres” move from the big city to Vivian’s small hometown Knight is loving the country life.

“One of the first times I took the kids to nursery school on my own I’m walking in with them and I know all the kids I know all the parents I know the teachers ” he says. “That’s just not something that happens in a large community. At that point it became something I understood and valued in a way I didn’t before.”

oward grew up dreaming of being a storyteller and her cookbook is a best seller.

“I still can’t believe it ” she says. “I read it and I’m like who did this? It’s the greatest professional accomplishment of my life for sure. I’ve made a TV show for five years and cooked in a restaurant for 10 years things that are temporary. You prep all day for something that’s consumed instantly you shoot something that lasts 26 minutes and it’s gone; those feel very temporary. I think about my children and when I’m gone what will they have that they can refer back to. The book is something that feels permanent.”

She turned 40 earlier this year. Rather than triggering a midlife crisis it’s resulted in some appreciative reflection.

“Mostly I’m really grateful ” she says. “For a lot of people turning 40 is something they dread like it’s some kind of death sentence. But I feel like � my 20s were awful. I didn’t know who I was I didn’t know what I was doing I was tremendously insecure. My 30s were about fighting for everything — trying to fight to find my place and my career and make a name for myself. I feel my 40s is about making the most of what I’ve done to this point and really fleshing that out and not screwing anything up.”