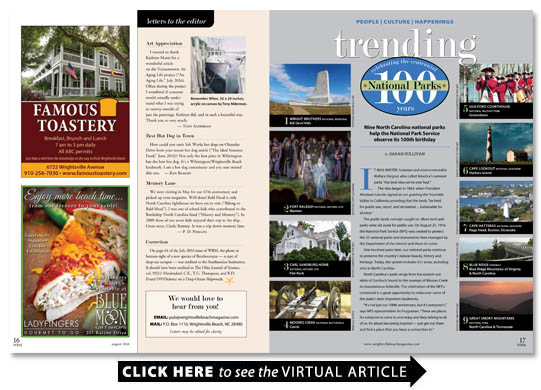 It was writer historian and environmentalist Wallace Stegner who called America’s national parks “the best idea we’ve ever had.”

The idea began in 1864 when President Abraham Lincoln signed an act granting the Yosemite Valley to California providing that the lands “be held for public use resort and recreation … inalienable for all time.”

The public lands concept caught on. More land and parks were set aside for public use. On August 25 1916 the National Park Service (NPS) was created to protect the 35 national parks and monuments then managed by the Department of the Interior and those to come.

North Carolina’s parks range from the eastern outskirts of Currituck Sound to the swamps of Moores Creek to mountainous Asheville. The celebration of the NPS’s centennial is a great opportunity to rediscover some of the state’s most important landmarks.

“It’s not just our 100th anniversary but it’s everyone’s ” says NPS representative Jin Prugsawan. “These are places for everyone to come to and enjoy and they belong to all of us. It’s about becoming inspired — just get out there and find a place that you have a connection to.”

The Wright Brothers National Memorial  belongs in the first category. On Kill Devil Hills at the very spot where Orville and Wilbur conducted the first successful sustained powered flights the memorial features a carved granite tower inscribed with the brothers’ names and topped with a marine beacon.

Within the park visitors can explore reconstructions of camp buildings as well as a visitor center that contains full-scale replicas of the Wright Flyers built in 1902 and 1903.

“My family has been here on the Outer Banks of North Carolina since 1862 our heritage is here and I’m proud to be part of that ” park historian Darrell Collins says. “I’ve traveled all over the world telling the story of the Wright Brothers.”

The Outer Banks are also home to Fort Raleigh National Historic Site established in 1941 to memorialize the Roanoke Colony the first English settlement in the New World that became the “Lost Colony” when the outpost of 116 souls inexplicably disappeared without a trace in 1590.

Prugsawan says a family-friendly activity is attending “The Lost Colony” drama that takes place in a rustic waterside theater each evening through August 20. The group staging the play has dedicated the season to the National Park Service in honor of the centennial.

Other NPS attractions include the location of a Freedman’s Colony set up by the Union Army during the Civil War to provide a safe haven for former slaves as well as Native American artifacts. The beauty of this park is in its diversity.

“It’s about finding what story is intriguing to you ” Prugsawan says.

The most unexpected national park in the state might be the Carl Sandburg Home National Historic Site in Flat Rock south of Asheville. The two-time Pulitzer Prize winner and author of the well-known poem “Chicago” is associated with the Midwest but he moved to North Carolina with his family in 1945 and lived in this house until his death in 1967. The 264-acre farm allowed Sandburg to write in solitude and provided a place for his wife Lilian to raise goats. Visitors can tour the home hike more than five miles of trails and see an operating dairy goat barn.

Closest in proximity to Wilmington the Moores Creek National Battlefield in Pender County commemorates the Patriot victory over Loyalists in February 1776. This 88-acre park part of the N.C. Birding Trail includes a boardwalk path over the creek and a visitor center complete with historic exhibits.

The Guilford Courthouse National Military Park in Greensboro memorializes the Battle of Guilford Courthouse fought March 15 1781. Though defended by Nathanael Greene’s 4 500 soldiers it fell to Lord Charles Cornwallis’ 1 900 British troops after more than two hours of combat. But in winning the battle Cornwallis might have lost the war. His losses were so heavy he abandoned the Carolinas. He surrendered to General George Washington seven months later.

The park includes two visitor centers with information about the battle and Colonial times and the Hoskins House which was used by the British during the battle and has been reconstructed to portray an 18th-century farm.

Chief ranger Vance Noles encourages visitors to learn about the history of the park.

“I think it’s about connecting with folks letting them know that it represents more than just the natural beauty ” he says. “What happened here is something that’s important for everybody to remember.”

North Carolina has two national parks dedicated to preserving the beauty and culture of the coast and two in the mountains.

Cape Lookout National Seashore includes three undeveloped barrier islands within a 56-mile stretch of the southern Outer Banks from Ocracoke Inlet to Beaufort Inlet accessible only by ferry. The most popular attraction is the Cape Lookout Lighthouse.

“Each park has unique and really remarkable resources for the visitors ” ranger Jonathan Polk says. “These national parks belong to the people and they’re really here for folks to enjoy them.”

Although spread out over 469 miles and several states the Blue Ridge Parkway is also part of the National Parks system. The scenic road touted as “America’s Favorite Drive” connects the Great Smoky Mountains National Park in North Carolina to the Shenandoah National Park in Virginia.

The headquarters is in Asheville and there are plenty of attractions along the 252 miles of the Parkway that weaves through North Carolina including views from scenic overlooks hiking trails picnic areas and exhibits.

Collins the historian at the Wright Brothers National Memorial says that visiting one of the parks is a must for the centennial or at any time.

“[They are] the last places in the country where you can find solace and tranquility ” he says. “They’re owned by the government but they’re also co-owned by all the citizens of America. I would like people to find stewardship and a sense of respect and pride in our national parks.”