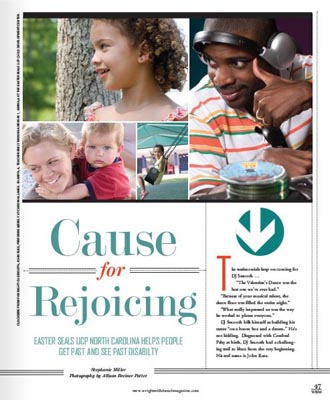 The testimonials keep on coming for DJ Smooth

“The Valentines Dance was the best one weve ever had.”

“Because of your musical talent the dance floor was filled the entire night.”

“What really impressed us was the way he worked to please everyone.”

DJ Smooth bills himself as building his career “on a boom box and a dream.” Hes not kidding. Diagnosed with Cerebral Palsy at birth DJ Smooth had a challenging trail to blaze from the very beginning. His real name is John Russ.

Fortunately for Russ United Cerebral Palsy guided him through pre-school prepared him for his academic career and provided him with a job as a teachers assistant at a UCP center after high school. From there he went on to work at the agencys supported business Copymatic Document Solutions a nonprofit employer for people with disabilities. Copymatic gave Russ his first taste of the business world and his dream took flight. He got support from Easter Seals UCP North Carolina and other organizations to buy the equipment and a van as well as help transporting his new gear back and forth from gigs. Since starting his DJ business Russ hasnt looked back. He may need some help getting to and from the show but on stage its all DJ Smooth.

Occasionally Russ has to fight the stereotypes. “Sometimes people can only see the wheelchair and they cant see the ability only the disability ” he says. “Everyone has challenges that they face every day. You have to look at the cards you were dealt and decide what youre going to do about it.”

“John is one of the most determined people I know ” says Leann Hollowell a DD (Developmental Disabilities) Supervisor. When he announced he was setting out to teach himself to tie his shoes a real challenge for people with Cerebral Palsy Hollowell held her breath. She may have been as thrilled as Russ when he declared success. “He has such positive energy. When you have a bad day just talk to John and youll forget what was bothering you.”

The goal for Hollowell and the other staff members is to help individuals like Russ reach their goals. “We believe that everyone who walks through that door can work or contribute in some way ” says Elliot Clark program manager for Community Mental Health and Supported Employment Training.

“We always ask ourselves the question ” says Jean Kenefick community leader “are we helpful in supporting them in areas that are important to them?” Staff members are a resource; the driving force is the clients plan.

Baby boomers may remember Easter Seals from the 1940s and 1950s as a leader in working with children with polio. But Easter Seals has grown to accommodate the needs of people with all types of physical disabilities including the deaf and the blind as well as those with mental illnesses.

As Easter Seals was growing so was United Cerebral Palsy (UCP) in North Carolina. UCP expanded into group homes and other types of residential services where men and women living on their own got extra help. UCP added supported employment training to help people move out of sheltered workshops into meaningful jobs. It expanded into respite care to assist family members as well.

When the two agencies merged in 2004 the synergy was dynamic. They went on to launch innovative programs to help people with mental illness stay in their communities rather than enter hospitals. They worked to keep children in their homes with family and in therapeutic foster care programs.

Now called Easter Seals UCP North Carolina (ESUCP) the organization worked hard to take disability out of the closet and put people to work and in schools where they could interact with the population at large an idea they called “inclusivity.”

“Children are the best teachers ” says Betty Clark director of Noahs Ark Children Center in Wilmington. “Young children have no prejudices. They love all their friends and innately know when one needs something and they provide it.”

“Im of a generation ” says Robin Maynard program manager for Early Childhood and Family Services “that grew up understanding that if somebody had special needs they didnt fit into our community. They just sort of disappeared. Now were trying to help the whole community realize that children with special needs are children first. Theyre much more like every other child than they are different. If you provide quality care you can include a child with special needs with just a little support and a few modifications in your classroom.”

This is a boon to working parents who now have expanded choices about where their children are cared for. “Now you can pick the childcare thats down the street from where you work ” says Maynard who manages the ESUCP outreach program ECHOES (Enhancing Childhood through Outreach & Educational Services) that serves children in New Hanover and the surrounding counties by supporting inclusion of children with or at risk of special needs through consultation and technical assistance in community childcare or preschool settings.

Parents of disabled children are a critical element of the community too. “Its a three-way partnership: Noahs Ark ECHOES and the parents ” says Noahs Ark Betty Clark. “We all have to learn from each other. Each has a value to the other. We all have a role in this childs life. If one link is weak it may not be successful.”

This partnership is especially significant when working with children and adults with mental illnesses. “Our goal is family preservation ” says Rochelle Shepard who heads Intensive In-home Services. “We want to keep children in their homes.” Shepards team goes into the home and works with children with diagnoses like ADHD PTSD bipolar disorder and substance abuse issues disorders serious enough to make the children at risk for psychiatric hospitalization or group home placement. Her caseload is ratcheting up as mental health services fall by the wayside.

Christine Byrd called Easter Seals UCP North Carolina to help with her granddaughter who was diagnosed with ADHD and PTSD after the girls mother Christines daughter took her own life. After four years of intensive work Byrd can say her granddaughter is doing well.

ESUCP North Carolina is giving Byrds granddaughter a chance to talk about her mother to ask questions. Theyve helped Christine with psychiatric care. “We dont know the right people the right places. Easter Seals took the ball and ran with it. We dont have to go shopping for professionals ” says Byrd.

Byrd and her husband now in their late 50s and early 60s with their own medical issues are so grateful for the emotional support the organization gives their granddaughter and them. “My image of Easter Seals is my grandmother buying Easter Seals stamps. Now I know thats just the tip of the iceberg ” says Byrd.

One of those services that falls below the tip of the iceberg is respite care which was a huge boon to the Byrds. As senior development director Larry Thompson says “When youre raising a child with disabilities you cant hire the kid down the street to care for them. You have to have somebody specially trained to offer those services. Just being able to get a break is a huge advantage in keeping a family together.”

Another below-the-waterline program is supported employment which allows people with disabilities to have gainful employment while receiving assistance from the agency.

“People are all the same. They may look different walk different but they are fully capable of doing the job ” says Kathy Bink a lead employment specialist with ESUCP. And they are highly motivated. Many non-disabled people drag their feet on their way to work; not so for Binks charges. “Work gives them a purpose ” she says.

Because of the stressed economy the need for support is greater than ever. More men and women with disabilities who have been supported by a parent may now find that parent unemployed says the agencys Elliot Clark. Everyone has to be out there to support the family unit. The agency also helps its population with a program called MEANS (Making Employment a New Success) which conducts counseling for people with disabilities.

All along the ESUCP staff supports its population with the mantra: Myself my world my dreams. Its up to the individual to plan his or her destiny and for ESUCP to help him or her make it happen.

Staff member Leann Hollowell recalls working with one young woman on ways to navigate the bus system to get back and forth to work. Hollowell kept encouraging the woman by saying: “You can do it. You dont need me.” One day Hollowell called to check on the woman and she wasnt there. She was out paying a bill or going to the mall or at worktaking care of business taking care of her life. The woman had worked hard for and earned her independence. It was cause for rejoicing for the young woman for Hollowell for everyone.

Easter Seals UCP North Carolina is commited to being a lifelong partner to people managing disabilities and mental health challenges. To learn more about their services please visit nc.eastersealsucp.com