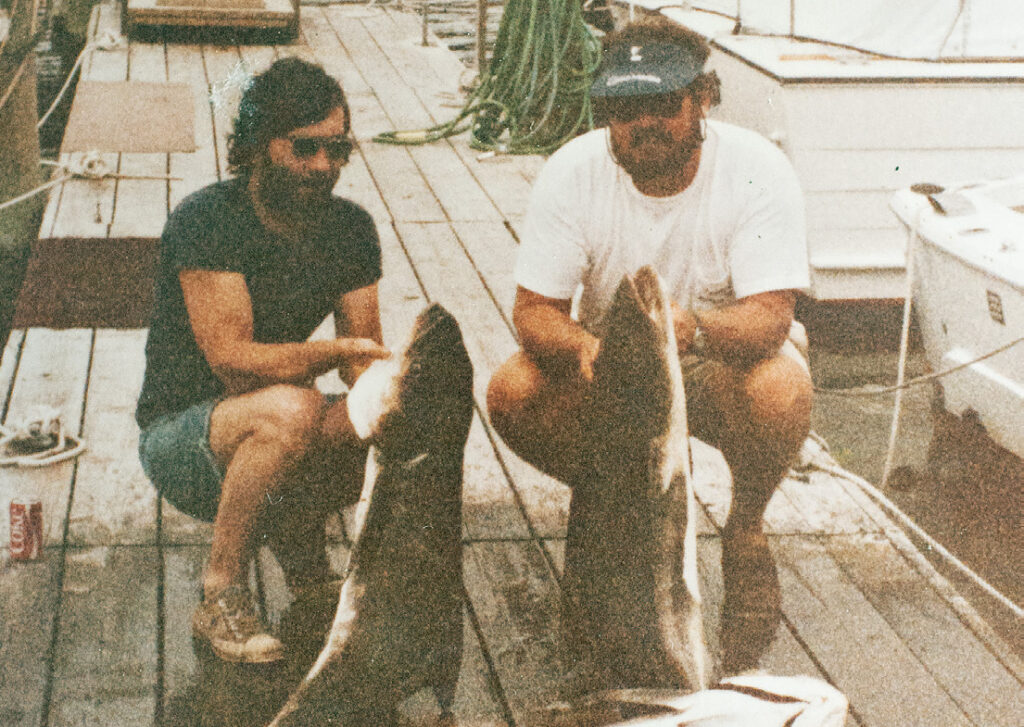 Top: Kit Taylor, right, displays a haul of cobia caught with a charter customer in 1979 at Wrightsville Marina. Above: Most local anglers were limited to piers like Johnnie Mercers in the ‘50s. Photo Courtesy of Kit Taylor

Kit Taylor is in the dockside bar at the Bridge Tender, within sight of the Intracoastal, just across from where the old Wrightsville Beach Marina used to be. It’s a bright, warm day in early April, a perfect day to be on the water, or just to talk fishing — cobia fishing.

There is a real fascination and excitement surrounding the hunt for this bullet-shaped fish with a shark’s profile. Search for “cobia stories” on the Internet and there are numerous choices to explore, from proud faces after a successful day of fishing to that of a weeping and exhausted young Australian who lost a long, treacherous fight with one of the fabled fish.

The 116.5-pound cobia caught off the Outer Banks in 2006 is both the state- and world-record holder in the 80-pound line class. Taylor says that only along the Gulf Coast of Florida is cobia fishing more popular than in North Carolina.

About 80 percent of cobia caught along our coast are taken from mid-May through mid-June, but they are found here even in the off-season. Wintering in south Florida and summering as far north as the Chesapeake Bay, cobia follow the water temperature and the currents. Sometimes the Cape Fear region has an off year, when the Gulf Stream and associated currents pull too far east, bypassing us.

Cobia is a desirable fish with a sweet, mild, tender flesh. Recipes run from elaborate to simple, but it’s delicious any way you cook it.  But it is really known for the sport of bringing it in.

According to Taylor, the best fishing stories tend to involve the strong and unpredictable cobia.

“Pound for pound, there’s no tougher fish or one harder to land,” he says.

The history of cobia fishing since the 1960s at Wrightsville Beach is as interesting as the fish itself and Taylor provides a front-row seat.

His father and grandfather were both “really good surf fishermen,” so Taylor started early.  When he was a kid in the ’60s, boats weren’t as prevalent as today. Pier fishing was the best and easiest way to learn about the sport, dealing with the variables of water, tides, wind and seasons, and the variety of fish. A good fisherman needed the depth of knowledge and experience to be able to pivot or creatively problem-solve.

“They had no resources and just plain had to figure it out on their own,” Taylor says.

By the time he was about 12, Taylor and his buddies would be dropped off at the beach where they would head for the piers. At Johnnie Mercers, the first stop would be the huge display cooler with a sliding glass top that could hold as many as 70-80 king mackerel caught that day. Fishermen would bring their fish to the cooler, write their name and the weight on a piece of paper, and slap it on the side of the wet fish to identify it when they collected their catch at the end of the day. The display cooler would also lure in people off the street to see what was being caught that day, and hopefully to coax them to get their poles to try their luck.

The boys then strolled along looking at what was being caught, ending up at the far end of the pier where the serious fishing was done, according to a strict pecking order. There were no kids here, but men in their 20s and up.

There were a limited number of prime spots and the long-term goal of Taylor and his friends was to earn a place here where they could carve their own notch for their pole and become a part of the elite group.

The first step in earning a notch was to catch bait fish — pinfish, yellow tails and small bluefish — for those on the pier. This entailed working the surf and then along the creeks and marshes between the mainland and the old Moore’s Inlet, where the Holiday Inn is today. They had to move fast and keep at it because bait fish can only survive about 30-40 minutes out of flowing water. The kids on the hunt for bait fish had to replenish the supply in the pier coolers throughout the day.

On the pier, cobia were lured by large, wire baskets holding bait fish. The bait baskets were lowered into the ocean off the end of the pier. Soon, the naturally inquisitive cobia could be seen nudging the basket trying to get at the bait. Using poles with live bait, the fishermen would skillfully hook the targeted fish and begin the process of bringing in this fierce fighter.

More marinas led to more fishing out of boats. Built in 1966, the north jetty at Masonboro Inlet became a prime place to catch cobia. Anchored off the jetty along Masonboro Island, fishermen still used wire baskets filled with bait fish to get cobia close enough to hook. Boats would have as many as five or six poles, each using a single hook with the live bait and a couple of treble hooks on the leader.

The next improvement was the development of live wells, tanks that kept water circulating to keep the bait fish alive. When they became available, covering more ground by trolling became feasible.

Taylor says the most fun he ever had fishing was cruising along the Florida coast with its sparkling clear-as-glass water hunting cobia.

The boat would run parallel to the beach while a spotter on the tuna tower looked for manta rays, the big ones, averaging 15 feet across. Their huge fins flap like giant wings, stirring up the ocean floor as they glide along, dislodging all kinds of fish, shrimp, and crabs that cobia feed on. Each ray can have from as many as 25 cobia following it, and a boat bringing in a dozen cobia at a time is not unusual.