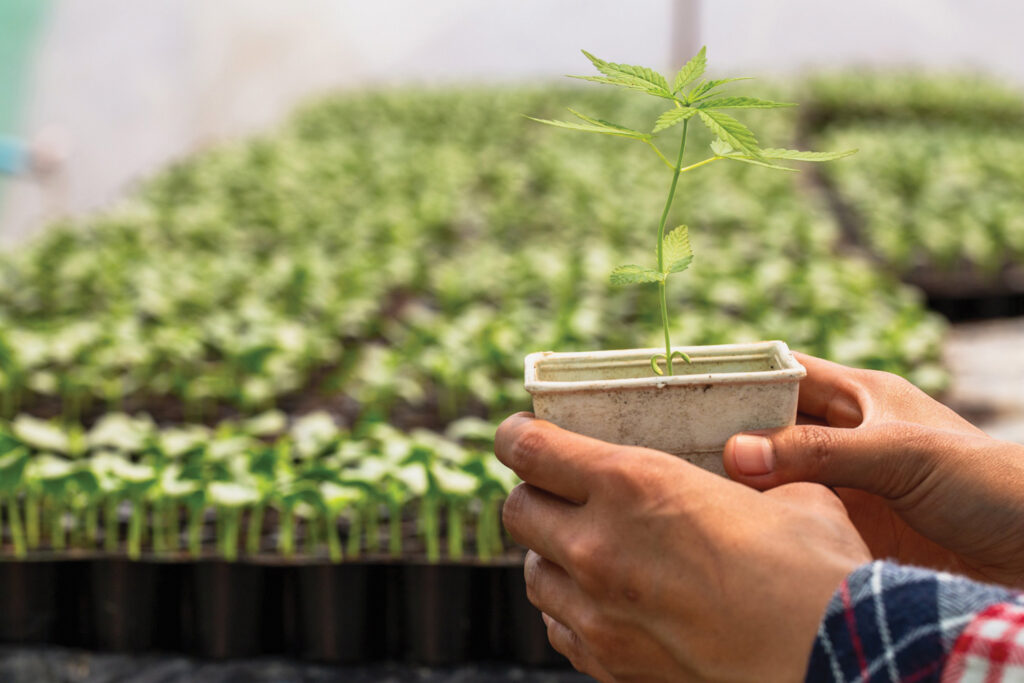 In the January 2019 issue of Wrightsville Beach Magazine, a story entitled “State Weed, The Rise of Industrial Hemp Farming in North Carolina,” explained the history and uses for hemp in an experimental five-year state approved growing phase. At that time, it was considered by many to be the next big cash crop in the United States. However, North Carolina hemp production remained young.

On June 30, 2022, after passage by the North Carolina General Assembly, hemp was permanently excluded from the North Carolina Controlled Substances Act as Gov. Roy Cooper signed into law Senate Bill 455, which allows for the farming and production of hemp in the state to continue legally.

Hemp is a fast-growing plant with uses that range from animal feed to pain-relief products to prostheses to construction materials. Hemp is also used to produce CBD oil.

The legislation specifies, “Hemp products mean all products made from hemp, including but not limited to, cloth, cordage, fiber, food, fuel, paint, paper, particleboard, plastics, seed, seed meal and seed oil for consumption, and verified propagules for cultivation if the seeds originate from hemp varieties.”

In construction, hemp can be used to make hempcrete, an alternative to concrete, and also turned into plywood, insulation, drywall, sealants and glues. Hemp fiber is a viable alternative to synthetic materials, and uses include prostheses constructed from textiles woven from hemp yarns. An environmental benefit of hemp is its suitability for phytoremediation, the process of planting a crop on farmland that has been contaminated from overcropping or flooding.

Sponsored by state Sen. Michael Lee, the hemp legislation passed the Senate 41-2 and the House 85-26.

“The hemp industry has become a vital part of our state’s economy over the last few years, with over 1,500 producers and employing thousands of North Carolinians … we look forward to North Carolina continuing to be a leader in the hemp industry,” says Lee, who represents District 9 (New Hanover County).

First grown in the United States during colonial times, hemp can be traced back nearly 5,000 years ago to Asia. Through the 1800s, hemp was used widely in the production of fibers, papers and textiles. By the early 1900s, hemp cultivation began to decline due to increased government regulations and the 1937 Marijuana Tax Act. The North Carolina Controlled Substances Act of 1970 effectively banned the production of hemp as a commodity until the approval of the federal Farm Bill in 2014, which allowed the cultivation of hemp for industrial uses.

While hemp and marijuana originate from the same species, hemp contains only trace amounts of tetrahydrocannabinol (THC), the psychoactive component in marijuana.

A second bill under consideration in Raleigh, Senate Bill 711, was stuck in the House of Representatives as the short session of the legislature ended. The bill, known as the Compassionate Care Act, would have legalized cannabis and cannabis-infused products for those suffering from debilitating pain and nausea with diseases including cancer, HIV, ALS, Crohn’s disease, Parkinson’s disease, multiple sclerosis, epilepsy, glaucoma or post-traumatic stress disorder.

Also sponsored by Lee and Brunswick County’s Sen. Bill Rabon and Forsyth County’s Paul Lowe, the medical marijuana legislation made it through Senate committee hearings and passed the Senate with a 36-7 vote before stalling in committee in the House.

“During the first committee meeting for the Compassionate Care Act, veteran after veteran spoke about the struggles they have been through due to their military service to this country. All of them were dealing with PTSD and many had either contemplated or attempted suicide. Their testimonies that day changed a lot of legislators’ minds about the bill,” says a spokesman for Lee. “SB 711 passed the Senate this year with broad bipartisan support, but the House chose not to pass it. Although the short session is over, the work is not. Senator Lee is committed to passing this legislation and we hope to get it done next year.”