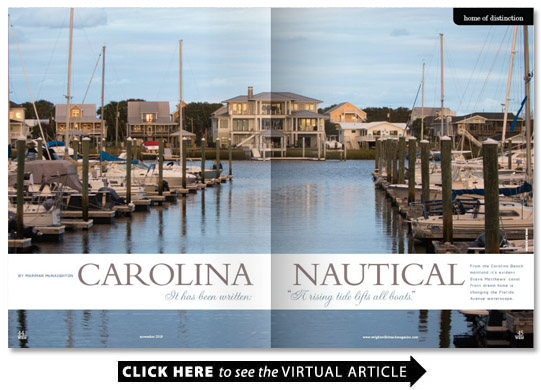 Steve Matthews skims across the surface of the Cape Fear River the bow of his Carolina Skiff parting the water. The automobile and boat broker heads through Snow’s Cut

then turns into the west bank of the Carolina Beach canal. The bustling waterfront is a highly trafficked boat lane but Matthews navigates the channel with ease. Nosing the bow into its berth he disembarks secures the launch and with the press of a button elevates the skiff high above the incoming tide.

He’s arrived at his new custom-built waterfront home. Not just any home but his dream home. And eventually his retirement home.

“I love the water ” he says. “That’s what the house is built around. I had a condo about 10 doors down for 13 years. I used to walk by this lot all the time.”

Matthews envisioned the potential the property offered but had to wait to purchase until the timing was right. In 2016 he met builder Mark Batson of Tongue & Groove.

“When we started on this project I said: ‘Mark I want it to look as much like a ship as you possibly can.'”

Batson a National Association of Home Builders Custom Home Builder of the Year finalist in 2018 recounts the beginning of the design process.

“The look that I thought would fit the property and the location on the water was a nautical contemporary ” he says. “Something that was a little edgy for Carolina Beach mixing in contemporary elements and traditional shapes with little nautical touches.”

The crackled glass backsplash above the range with sea glass pigment to echo the ship’s wheel chandelier was a late addition to replace the original marble backsplash. With a warm champagne finish the chandelier encrusted with actual sea glass floats above the dining table between the kitchen and the great room salon.

Casually furnished from Custom Home Furniture Galleries with plush upholstered sectional sofas and armchairs grouped around a driftwood conversation table the salon is equipped for all seasons with walls of windows and a linear fireplace surrounded by a shell tabby finish.

The living room ceiling is layered with three vertical trays inset with uplighting in contrast to the open kitchen’s horizontal beams. The ceilings delineate one space from another. The front door custom made with beveled glass and 4-inch mahogany is modeled after a ship’s hatch.

Matthews owns used car dealerships in Clayton Goldsboro and Wilmington. He spends 99 percent of his workdays at his Market Street location but once a week he makes the loop to all three lots before heading back to Florida Avenue.

Suggesting the details reminiscent of vintage ocean liners inlaid moldings inside built-in shelves house Matthews’ collection of treasures — shells sailboat and ship models masks and a carved cross — brought back from Costa Rica and Belize. LEDs inside the cabinets showcase the artifacts.

Inspired by motifs that harken back to the Wilmington area’s shipbuilding industry Batson brought many maritime references into the project without going overboard — from cable railings on outside decks to a playful steam whistle that announces the arrival and departure of guests.

“Living on the water you have a lot of boat traffic ” Batson says. “A lot of people are going to know who you are and that you’re at home. So we installed a steam whistle on the outside of the house. If someone goes by and waves he can hit that button.”

In the home’s primary stairwell a tile wall rises from the ground level to the top floor. Mazer says the original design included a waterfall but potential moisture issues led her to search for a porcelain tile from Spain that mimics the flow of water. Paired with the foyer’s grand staircase the upper floor landing leads to a pocket door entry to Matthews’ man cave. A cutout compass rose at the ceiling and tailored inlays in the mahogany floors extend the ship building metaphors.

Matthews says he has probably one of the prettiest views on the island. From the deck he can see the town’s Thursday night fireworks and the lights of the Ferris wheel Memorial Day to Labor Day. During the off-season he hears no traffic only the songs of birds.

From the master bedroom Matthews wakes up to views of Snow’s Cut to the north. Motorized window shades he programs from his phone keep the space cool during summer afternoons.

With two adult children he anticipates the days when grandchildren will visit; one day the bunkroom will sleep four.

The walk-in steam shower in the master bath was voted one of most popular features during the 2018 Parade of Homes.

The dreamy glass and tile steam shower equipped with multiple showerheads a luxurious built in bench and clerestory porthole window are the focal points of the master bath. A soak tub allows ultimate privacy while offering views of the canal. Mirrored vanities above sinks add volume to the linear space washed in natural and reflected daylight.

Scott Sullivan’s widely recognized style is articulated in the massing of two- and three-story bays resembling towers under one sprawling roofline. Sullivan seamlessly blends Mark Batson’s maritime idioms into the fa�ade. Batson often incorporates tabby elements inside and out “because it harkens to where we live.”

“Back in the old days they would use what was available which were seashells or oyster shells ” he says. “They would mix cement with oyster shells and form structures including fireplaces and foundations for fireplaces.”

A wood-burning fireplace on the home’s second floor sends smoke out of the chimney that Batson fashioned to resemble a ship’s smokestack now banded and numbered with Matthews’ address.

Between the garage doors an entrance to the ground level gym is tucked behind the home’s primary stairway. The fully equipped fitness room consumes the width of the floorplan. Views of the waterfront are seen through closed or open glazed garage doors that also provide instant access to the lanai spa pool and deck.

If you stand on the upper decks and look at the pool you can see a repeat of the porthole theme in the pool deck ” Batson says.

The array of portholes changes colors from lavender to green to blue at night when the entire home lights up the west bank of Carolina Beach canal as though saying: “Steve’s home!”