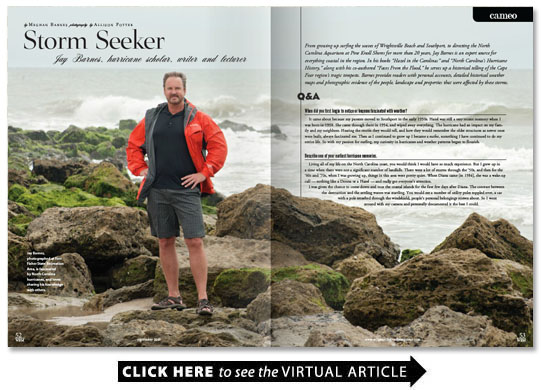 From growing up surfing the waves of Wrightsville Beach and Southport to directing the North Carolina Aquarium at Pine Knoll Shores for more than 20 years Jay Barnes is an expert source for everything coastal in the region. In his books “Hazel in the Carolinas” and “North Carolina’s Hurricane History ” along with his co-authored “Faces From the Flood ” he serves up a historical telling of the Cape Fear region’s tragic tempests. Barnes provides readers with personal accounts detailed historical weather maps and photographic evidence of the people landscape and properties that were affected by these storms.

When did you first begin to notice or become fascinated with weather?

It came about because my parents moved to Southport in the early 1950s. Hazel was still a very recent memory when I was born in 1958. She came through there in 1954 and wiped away everything. The hurricane had an impact on my family and my neighbors. Hearing the stories they would tell and how they would remember the older structures as newer ones were built always fascinated me. Then as I continued to grow up I became a surfer something I have continued to do my entire life. So with my passion for surfing my curiosity in hurricanes and weather patterns began to flourish.

Describe one of your earliest hurricane memories.

Living all of my life on the North Carolina coast you would think I would have so much experience. But I grew up in a time when there were not a significant number of landfalls. There were a lot of storms through the ’50s and then for the ’60s and ’70s when I was growing up things in this area were pretty quiet. When Diana came [in 1984] she was a wake-up call — nothing like a Donna or a Hazel — and really got everyone’s attention.

I was given the chance to come down and tour the coastal islands for the first few days after Diana. The contrast between the destruction and the settling waters was startling. You would see a number of utility poles toppled over a car with a pole smashed through the windshield people’s personal belongings strewn about. So I went around with my camera and personally documented it the best I could.

What is a favorite storm you have studied?

Hurricane Hazel still to this day is the storm people like to talk about even though it was more than 60 years ago. It was in October. Hazel was the only Category 4 hurricane to ever hit North Carolina and it had a major impact on Wrightsville Beach and New Hanover and Brunswick counties. A lot of the photographs that were taken during that time are real treasures which is part of why I lecture about this quite frequently because of the amount of attachment that is still felt toward this storm.

It all depends on where you are and what kind of plans are in place for your location. I think the state and government agencies have built the best preparation for coastal communities that they can. One of the blessings we have in this area is that we do not have large city centers like Tampa or other cities in Florida which would need to be evacuated immediately leaving thousands of people displaced.

When would you predict the next big hurricane will hit the Cape Fear region?

There is no predicting when the next major storm is going to hit. The predictions you get each year are how many to expect during the season and those predictions are usually pretty spot-on. But the truth is any year could be a bad year if that storm hits you. All we know is that sooner or later we will get one.

What are the best hurricane survival tools to keep on hand?

A set of car keys can be a lifesaver if you make a move at the right time. However if you move at the wrong time you will be risking too much. In Hurricane Floyd over half of the 52 casualties in North Carolina were people who drowned in their vehicles. So it is almost a trick answer.

Do you offer any unusual hurricane prep advice?

Make sure when you are evacuating you are not evacuating into a possible flood zone. Most people do not realize that many inland places also experience heavy flooding.

What is your biggest professional accomplishment?

I was the director of the aquarium at Pine Knoll Shores for 20 years and led the effort to redesign and renovate that structure so that it could reopen for a new generation.

I became the director in 1989 and it was in the mid-90s that we began seriously planning for a major renovation which would nearly triple the size of the facility. Through our renovation we were able to add multiple setups that aren’t featured in nearby aquariums like shark and otter exhibits. It was about a $27 million project and with its success other North Carolina Aquariums such as Fort Fisher were also able to gain grants and funding to expand their locations.

What are you currently working on?

I enjoy writing about hurricanes but right now I am working on everything from screenplays to articles for various magazines. I also like to paint and take photographs in my free time.