Cameo: Give My Regards to Broadway 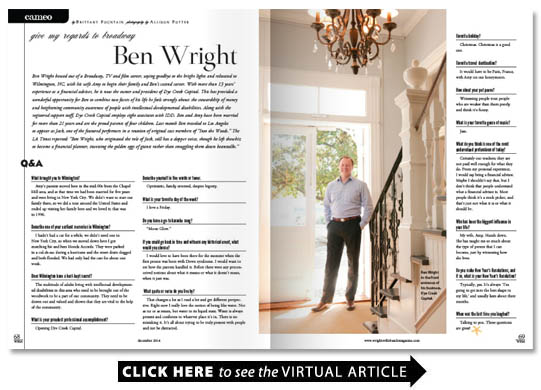 Ben Wright bowed out of a Broadway TV and film career saying goodbye to the bright lights and relocated to Wilmington NC with his wife Amy to begin their family and Ben s second career. With more than 13 years  experience as a financial advisor he is now the owner and president of Dye Creek Capital. This has provided a wonderful opportunity for Ben to combine two facets of his life he feels strongly about: the stewardship of money and heightening community awareness of people with intellectual developmental disabilities. Along with the registered support staff Dye Creek Capital employs eight associates with IDD. Ben and Amy have been married for more than 21 years and are the proud parents of four children. Last month Ben traveled to Los Angeles to appear as Jack one of the featured performers in a reunion of original cast members of Into the Woods. The LA Times reported: Ben Wright who originated the role of Jack still has a dapper voice though he left showbiz to become a financial planner investing the golden eggs of giants rather than smuggling them down beanstalks.

What brought you to Wilmington?

Amy s parents moved here in the mid-90s from the Chapel Hill area and at that time we had been married for five years and were living in New York City. We didn t want to start our family there so we did a tour around the United States and ended up visiting her family here and we loved it; that was in 1996.

Describe one of your earliest memories in Wilmington?

I hadn t had a car for a while we didn t need one in New York City so when we moved down here I got matching his and hers Honda Accords. They were parked in a cul-de-sac during a hurricane and the street drain clogged and both flooded. We had only had the cars for about one week.

Does Wilmington have a best-kept secret?

The multitude of adults living with intellectual developmental disabilities in this area who need to be brought out of the woodwork to be a part of our community. They need to be drawn out and valued and shown that they are vital to the help of the community.

What is your proudest professional accomplishment?

Describe yourself in five words or fewer.

What is your favorite day of the week?

I love a Friday.

Do you have a go-to karaoke song?

If you could go back in time and witness any historical event what would you choose?

I would love to have been there for the moment when the first person was born with Down syndrome. I would want to see how the parents handled it. Before there were any preconceived notions about what it means or what it doesn t mean when it just was.

What quote or verse do you live by?

That changes a lot as I read a lot and get different perspective. Right now I really love the notion of being like water. Not as ice or as steam but water in its liquid state. Water is always present and conforms to whatever place it s in. There is no mistaking it. It s all about trying to be truly present with people and not be distracted.

Christmas. Christmas is a good one.

It would have to be Paris France with Amy on our honeymoon.

How about your pet peeve?

Witnessing people treat people who are weaker than them poorly and think it s funny.

What is your favorite genre of music?

What do you think is one of the most undervalued professions of today?

Certainly our teachers; they are not paid well enough for what they do. From my personal experience I would say being a financial advisor. Maybe I shouldn t say that but I don t think that people understand what a financial advisor is. Most people think it s a stock picker and that s just not what it is or what it should be.

Who has been the biggest influence in your life?

My wife Amy. Hands down. She has taught me so much about the type of person that I can become just by witnessing how she lives.

Typically yes. It s always: I m going to get into the best shape in my life   and usually lasts about three months.

When was the last time you laughed?

Talking to you. These questions are great!