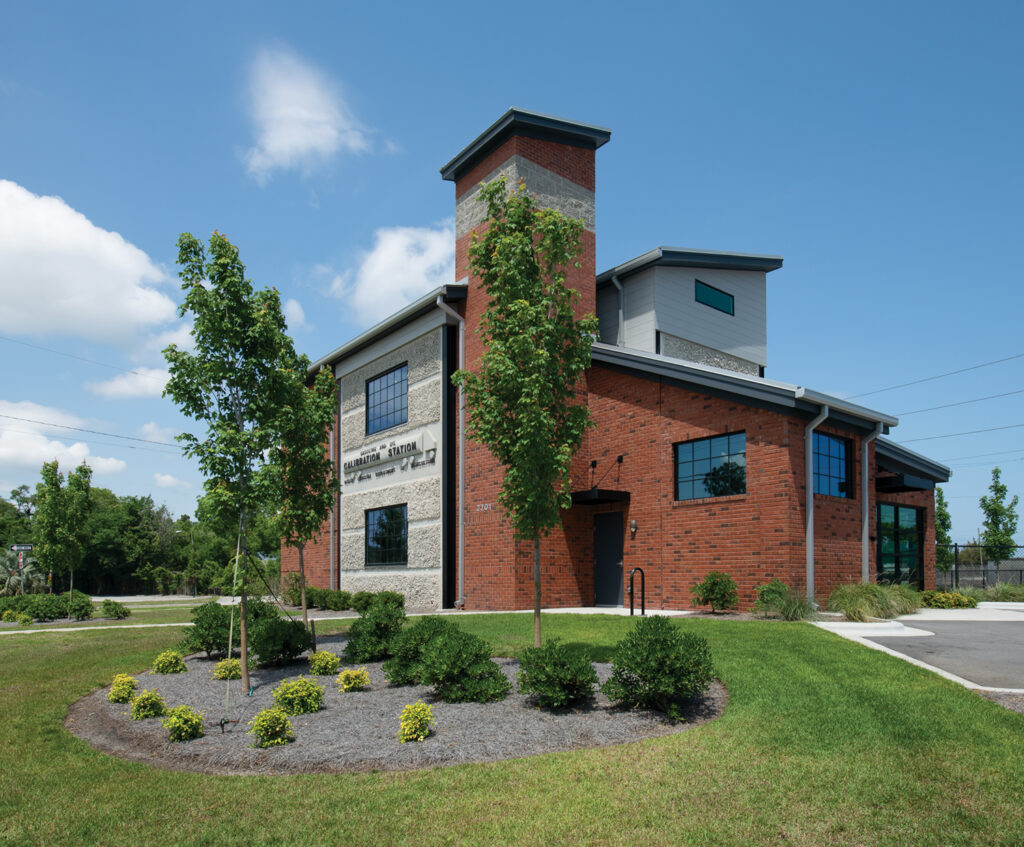 In this unique office building overlooking the North Carolina State Ports and trucking yards, industrial style is displayed though the marrying of textures. Concrete, steel beams painted a marine gray, clear coated brick and drop cord pendant lighting create a stylish industrial feel. The signage of the original Calibration Station is preserved and made new with sandblasting and powder coating. Photo by Allison Potter

What was once a plain, no-frills structure made of steel beams and concrete is today an eye-catching industrial-style office building for a local land development company. Across the street from the State Port Authority, the former North Carolina Department of Agriculture Gas and Oil Calibration Station has been recalibrated into the modern headquarters of a Wilmington land development corporation.

The project took two years to complete due to the complexity of adding 3,100 square feet to the building as well as adding a roofline and cutting windows into solid concrete. The building sits on a triangle-shaped lot on Burnett Boulevard in the heart of all the action of the Port of Wilmington, just as the company desired.

They used the services of Cothran Harris Architecture and Mark Loudermilk Architecture. Sanco Builders Corp. was the contractor.

Alexander’s favorite part of the renovation is that the original N.C. Department of Agriculture nameplate on the front of the building and its backdrop of a cement cutout of a tanker truck remains. The metal lettering was sandblasted and powder coated so that it could stay, a tribute to what once was.

Inside, there has been a complete transformation.

“Right here where I’m standing is where the hole would have been where the calibration of the trucks took place,” says Alexander, pointing to the floor.

She then points above to where catwalks used to be and where ladders hung down. The existing steel beams are now a design feature. The adaptive use of the building added a lobby, conference room, break room, nine offices and two storage areas, a much larger use of the space compared to only one office before, which has been turned into a conference room.

“The challenge was trying to make this industrial building look industrial, but not cold,” says Alexander.

“The wood on top of our conference table is from the original Belk Beery building downtown,” says Alexander.

The table was a custom design by Martin Custom Woodworking.

“Southern yellow pine is and has always been a local species and forests of it have grown here in Wilmington for thousands of years. It was a natural for the space,” Curtis Martin says.

Brick is used to fill in open spaces and clear coated for functionality and low maintenance. The original aggregate concrete slabs of the calibration station are accented throughout.

Wide stairs of pine lead to the offices on the second level.

“With these stairs we used the same kind of finish they use on basketball courts to get that shine,” Alexander says.

On the second floor, the front office features concrete countertops and a view over the port stretching for miles. Alexander occupies the back office with a view of the port’s tanker trucks coming and going. The backside of stairs to the third level come across her desk.

“They said, ‘We can just Sheetrock it.’ I said, ‘No, let’s stain it and leave it as is,’” says Alexander who uses the stairs to display important documents.

The floor tile has touches of orange and teal pulled together with furnishings and fixtures.

“I could see it in my mind before we ever broke ground. It pretty much laid out itself because all the existing beams were here, it laid out the office spaces,” she says.

The company had been at its former location since the late 1980s. This new building at the port provides a more productive space and better location. “Once we moved in here, I felt at home,” says Alexander.