Cake as a Canvas 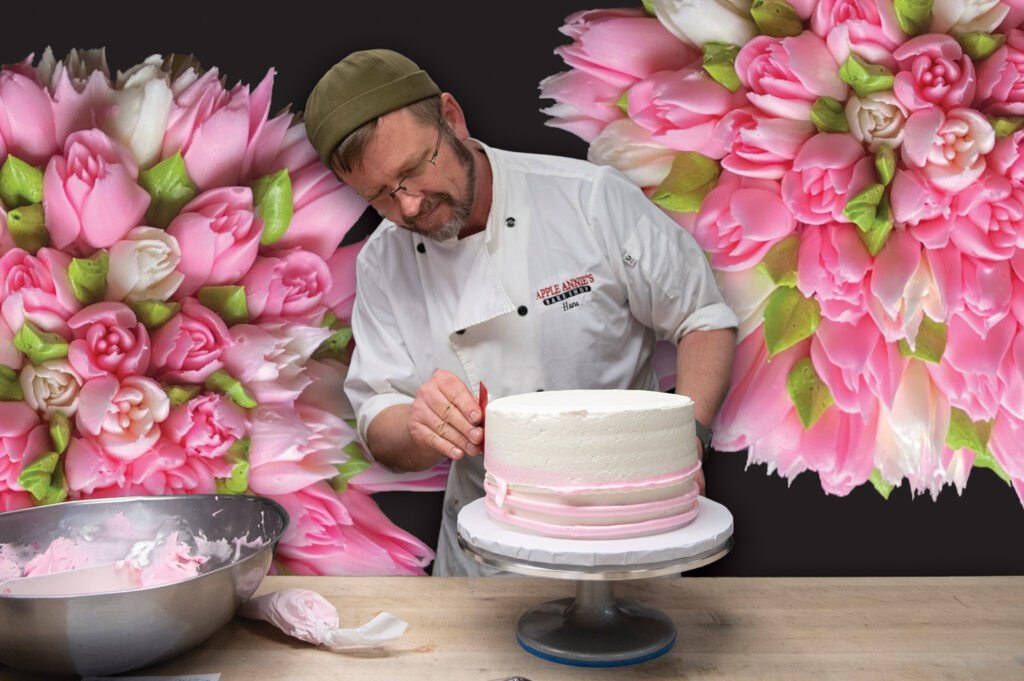 Wilmington, known for its history and azaleas, the Battleship North Carolina, and Dawson’s house, offers a newer claim to fame: the renowned cake decorating of Hans Westermark.

Raised by a family of bakers, Westermark traveled to Pennsylvania during the summer of 1990 to work in his grandfather’s bakery.

“I didn’t realize this was going to be the start of the rest of my life,” he says.

Westermark returned home to Wilmington to finish high school and got a job at Apple Annie’s Bake Shop that mainly involved cleaning up. Fearing that his artwork would be ruined if he left it in the car, Westermark started bringing it inside. Bakery owner Gary Longordo recognized his talent, along with his work ethic and experience working for his grandfather, and asked him to become an apprentice.

After seven years at the bake shop, Westermark did an exchange program in Switzerland for 18 months to learn the Swiss way of baking. He returned to Wilmington in 1999 with a new set of skills, which he successfully integrated into the baked goods.

For the first 20 years, Westermark worked side-by-side with Longordo decorating cakes. After Longordo sold the business, Westermark became the only cake decorator, a position he’s held for the past 10 years.

“I’ve learned a lot because I like to experiment a lot,” says Westermark, who has been featured in national and international media outlets.

“My style is very old school apparently, partially because I use parchment for decorating instead of pre-formed plastic bags,” he says.

The master baker’s point-of-view videos found on social media showing his artistry of decorating cakes and other mouthwatering delectables have gained him a large following, more than 375,000 followers worldwide. His real-time videos show the inclusion and placement of intricate rosettes, flowers, animals and landscapes.

“Surprisingly enough, I have a lot of older followers who are over 30,” says Westermark. “It’s not uncommon for people to come in and ask me to reproduce something they saw on one of my videos.”

A particularly click-worthy, fun distraction is the cake he created to celebrate the 70th anniversary of the Harbor Island Garden Club, which displays the incredible depth and range of his talent.

The decision to integrate music into each video was his secret ingredient.

“The first few videos were pretty bad. With no music, you can hear noises in the background and the crunching of the icing bags,” says Westermark.

Now, he picks a song to go with the unique feeling, vibe or theme for each cake. After watching the video for the Garden Club anniversary cake, which has the Cowsills’ 1967 hit “The Rain, the Park & Other Things” as a backdrop, it’s hard to imagine a better pairing.

Other examples of the music used to showcase his creations include “Amie” by Pure Prairie League, “Does Your Mother Know” by ABBA, and “Hypnotized” by Fleetwood Mac, a song he included in response to a customer’s question of whether he could write happy birthday on a cupcake.

“I literally write happy birthday hundreds of times a day,” says Westermark, who records his videos while holding his phone in his left hand.

Three of Westermark’s fellow employees also have been there for decades. Jamy, the head baker, has been working with the business for over 44 years. Greg, who makes the buttercream and many other key items, has been there 33 years. And Nancy, who specializes in customer service, has worked at the bakery for more than 25 years.

“Since I started doing these videos, it has seemed like things have gotten a lot busier around here,” says Westermark, “but that may just be from pent-up demand from people wanting to get out more after the pandemic.”

Though Westermark always preferred to be behind the scenes, he is adjusting to living a more public life.

“Being recognized on social media has been a breath of fresh air,” he says. “I read all the comments on my page and my followers have given me lots of great ideas.”

Westermark loves the idea of keeping the old ways alive and teaching and inspiring those who are watching.

“It’s wonderful to feel the support of the community and it is extremely validating. I have always loved technology and decorating cakes. This blends everything together and I feel like I’m living in a dream. Since this happened my followers have been my life force to keep on creating,” he says.