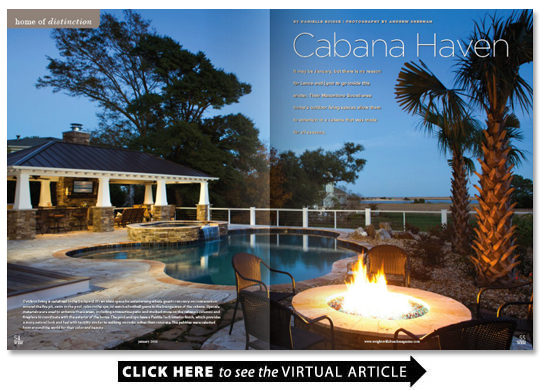 It may be January but there is no reason for Lance and Lynn to go inside this winter. Their Masonboro Sound-area home’s outdoor living spaces allow them to entertain in a cabana that was made for all seasons.

“We just had a backyard tailgate party ” Lance says. “We watch football out here.”

A casual feel permeates the home with a combined lodge spa and retreat aesthetic.

“We love to entertain and the house is geared toward that ” Lynn says.

The waterfront home is a perfect setting to host get-togethers for friends colleagues and neighbors. A majority of guests’ time will be spent in the cabana part of an expansive resort-style outdoor living area that includes a wood-burning fireplace with a television mounted above as well as a full outdoor kitchen and lounge area. Oak trees act as the backdrop while palm trees frame the perimeter of a free-form pool and spa fire pit outdoor shower and covered porch.

“It has everything you need for grilling steaks and Lowcountry boil while you are watching a football game and going in and out of the swimming pool. It’s got it all — dining and living all rolled up in a crazy package ” says Whit Honeycutt general manager of North State Custom Builders.

With two sons and two black Labradors the family wanted to be on the water to enjoy activities that would be part of their new lifestyle.

“We switched from golfing to boating. Now we can include the dogs and take them to Masonboro and Figure Eight Island. They absolutely love it ” Lynn says.

The homeowners moved from Houston to Wilmington in January 2014 for a job relocation. After building three houses prior to this one they were accustomed to designing a home the way they wanted it. Their two main priorities were the kitchen and the cabana.

“We had a cabana at our last house. We grill a lot outside so I wanted it to be nice for when I am cooking ” Lance says.

Initially the homeowners did a thorough search for a new home but eventually decided to build what would be their retirement home.

“It’s meant to be our permanent house ” Lynn says.

Once the decision was made they began to look for lots on the water. The couple broke ground in 2013 and chose North State Custom Builders to build their final home.

“When they came in to meet with us they mentioned they were looking at lots ” Honeycutt says. “When they mentioned this lot I told them about the house we were building down the street. We were familiar with the views and site work sunrises and sunsets and the neighborhood. I thought the neighborhood was a diamond in the rough at the time due to major sewage work going on. At the time it didn’t show the potential of the lot but we knew what we could do with it. It helped push them toward this spot.”

Both the location of the home and the escape from the hustle and bustle of Houston are perfect.

“We are so glad to be in Masonboro in between two beaches and not in the tourist areas. We are in a tucked-away place ” Lynn says. “We fell in love with Wilmington. We liked the quaintness here — the people are so friendly.”

When the couple was ready to move forward Honeycutt immediately had ideas for the home.

“The house has direct views of the Intracoastal Waterway Masonboro Island and Uncle Henry’s Oyster Roast. I had some old black-and-white photos to show them of the historic site. No doubt it’s a cool spot ” he says. “This was a design project that was blending successes of houses past with captivating scenic views with a spin on coastal elegance and outdoor living.”

The design focus was set on a casual feel for a home that seemed lived in — an informal dining area off the kitchen and an open plan that would funnel daylight in through the windows and emphasize the view of the waterway.

A large kitchen with an island and additional seating area welcomes guests to gather functioning well for entertaining purposes.

“I enjoy it ” Lynn says. “We have a lot of friends and family that like to cook and we can all cook together in here. This is where people congregate.”

Neutral walls and white cabinetry keep the kitchen breezy while the oil-rubbed bronze light fixtures stacked stone fireplace and river-wood mantel are unique in their juxtaposition.

The homeowners wanted a cohesive feel from exterior to interior carrying the stone from the foundation and columns outside to the interior double-story fireplace that starts in the great room and ends upstairs with a balcony overlooking the living spaces. A sentimental piece hangs above the mantel.

“We lived in Paris for a while. Lance’s sister mentioned that we visit Monet’s garden. I love gardens and gardening. His brother hadn’t painted in over 20 years and he asked to paint from a picture we took of the garden ” Lynn says. “You decorate with what makes you happy.”

The couple had several ideas and inspiration for this house from the time they lived in France which they incorporated into the ground floor.

“The way the house is laid out it had an area for a man cave ” Lance says. “We used to have a game room and bar so once I saw this space I wanted a rustic rugged look in there.”

With a pool table and full bar made from reclaimed pine from the Cape Fear River guests often go back and forth between the pool table and the cabana outside. A soffit that hangs above the bar is wrapped in the reclaimed river wood and has a copper face from which industrial pendant lights hang. Further down the hallway is a custom wine room with a travertine floor mahogany ceiling and frameless glass entry.

Lance began collecting wine while they lived in Paris and he enjoyed designing both the man cave and wine room.

“The men drool over the wine room ” Lynn says.

The ground floor allows both Lance and Lynn to share an exercise room but also to have their own separate spaces a common theme in custom homes designed for retirement. Lynn has her craft room across from the man cave.

“I am a big scrapbooker and I sew. I took some painting lessons before I moved here and it’s important for me to have that creative outlet ” Lynn says.

An additional feature installed with an eye to the future is an elevator as the couple anticipated the day when climbing stairs would be difficult.

“This is the last hurrah ” Lynn says. “We’ll retire here. That’s why we put the elevator in.”

It has proved to be beneficial in the here and now. Lynn recently underwent surgery and was in a walking cast and one of their dogs also had an operation. The elevator helped both to get around the house allowing them to access all three floors.

Soothing neutral colors flow through the upstairs which includes three bedrooms and a coffee bar in the hallway outside of a home theater that includes a large screen and movie-style seating. A unique loft setup allows the couple’s 18-year-old son to have his sleeping space and living space in the same room with his bed only accessible by a ladder.

After living in the home for less than one year the family has become accustomed to their casual and comfortable waterfront home in Wilmington.

“It is fun sharing our private island in our backyard. We have a family competition for who can collect the best beach shells at Masonboro Island ” Lynn says. “Our biggest hope is to share the house with friends and family. It is meant to be shared and enjoyed.”