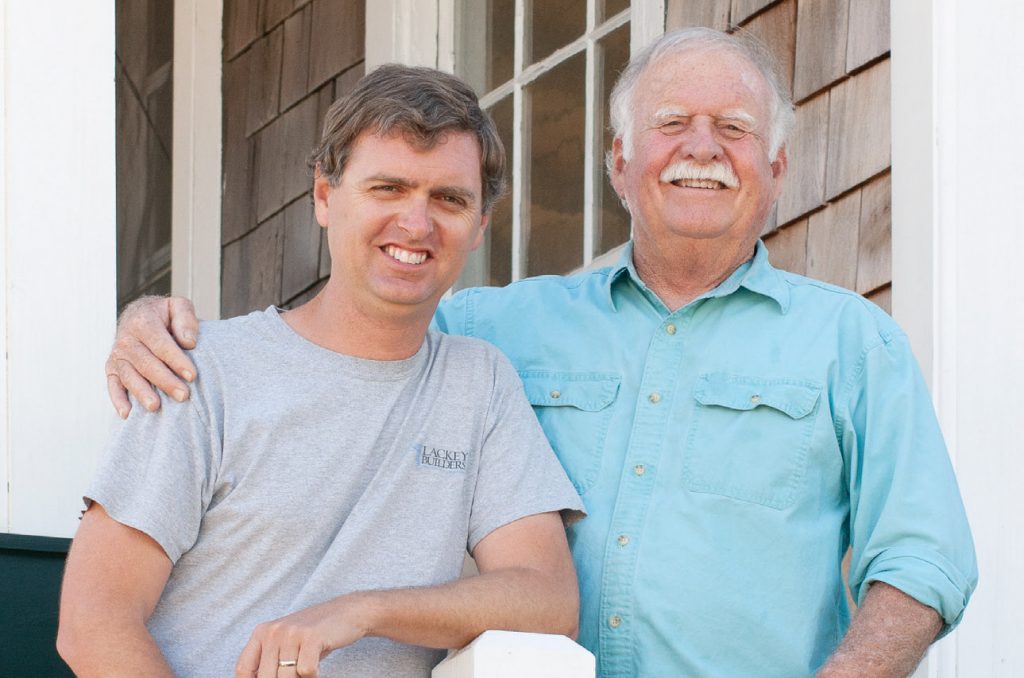 “I never have stopped and counted, but I can ride down to Wrightsville Beach and I have about two or three on every street,” says Walt Lackey, the senior member of the Lackey Builders team. “It makes you very proud.”

With a 45-year history of building in Wrightsville Beach, it is no surprise that Walt Lackey has made an impact on nearly every street within the town — including relocating most of the cottages within the Historic Square. Lackey majored in business administration at Wilmington College (before it became the University of North Carolina Wilmington), but couldn’t find any jobs that interested him in his chosen field.

“There wasn’t anything that appealed to me in that line of work so I decided to be a carpenter in the meantime, which I had always enjoyed,” he says. “It ended up that a bunch of my friends, Wright Holman being one of them, all joined up together and away we went. We just weren’t cut out for a normal job, we wanted to work for ourselves.”

Partnering with Holman — the late Wrightsville-based builder who Lackey says knew the most about the architecture of the beach — was a natural fit.

“He was more the politician and I was more of the technician,” Lackey says. “I liked the nuts and bolts of it, and I think Wright would have been a good senator because he loved to talk and he could sell.”

Walt recalls that one of their first projects was to transform the building that now houses the Bridge Tender from a vacated Duke University marine science laboratory into a restaurant.

The experience of working with Holman was not reserved only for Walt Lackey. Walt’s son and now business partner, Kyle Lackey, grew up on the construction sites of the two men and took to the trade naturally.

“I was always attracted to the trade and would work summers between college semesters with my dad and Wright. In 2006 I came on full-time,” Kyle Lackey says. “I mostly started working with Wright and he taught me how to treat people, whether that was the carpenter or the customer, and to always stand behind your work. You should treat everyone like they are family.”

As with any father-son relationship, Walt and Kyle have had their share of disputes when learning to work with each other. The shared love of building brings them back together.

“It has been fun, but we have had our disagreements,” Kyle says. “But then you work it out and keep on moving, and a majority of the time my dad was always right about whatever the disagreement was.”

“And Wright was always right,” the elder Lackey adds.

Stemming from the influence of Holman and with Walt’s history, the Lackeys prefer building homes that honor the legacy of the traditional beach cottage. One of Walt’s favorites, 524 South Waynick Blvd., is a testament to the skill and craftsmanship of the team. Without a single piece of drywall used in the new construction, the house features shingled siding made from cypress. The Lackeys recall one passerby congratulating the crew on doing such a good job restoring what they thought was a historic home.

“We took that as a compliment,” Walt Lackey says.

The ever-changing taste of the clientele keeps the Lackeys’ interested. Invested in catering to their clients’ tastes, the Lackeys current project list includes two homes that epitomize a couple of the prominent styles of homes found at Wrightsville Beach. One, situated just south of the Blockade Runner Beach Resort, is a modern home built for a younger couple, while a traditional beach cottage is in the works on West Charlotte Street for an older couple.

“There is a place for both; variety is good, and we enjoy building both styles,” Walt Lackey says.

Every home the Lackeys build comes with an unwritten warranty — if there is a problem after construction is complete, they will be there to fix it.

“If there is something wrong, we’ll take care of it,” Walt Lackey says. “We are going to be here to service the house. After the hurricane hits or when the pipes freeze, we’ll be there.”

Now in his 45th year building homes on Wrightsville Beach, Walt Lackey says the love of his trade keeps talk of retirement at bay.

“I think I’m just going to work as long as Kyle will have me, until he fires me,” Walt says, laughing. “Building is almost a hobby. It is a job, but it is fun. And watching everything come together is very rewarding.”