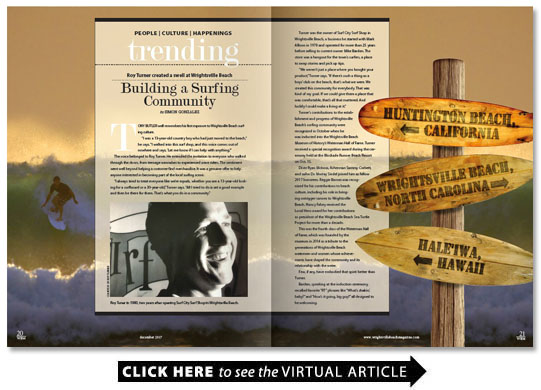 “I was a 13-year-old country boy who had just moved to the beach ” he says. “I walked into this surf shop and this voice comes out of nowhere and says ‘Let me know if I can help with anything.'”

The voice belonged to Roy Turner. He extended the invitation to everyone who walked through the doors from teenage wannabes to experienced wave riders. The sentiment went well beyond helping a customer find merchandise. It was a genuine offer to help anyone interested in becoming part of the local surfing scene.

“I always tried to treat everyone like we’re equals whether you are a 13-year-old looking for a surfboard or a 30-year-old ” Turner says. “All I tried to do is set a good example and then be there for them. That’s what you do in a community.”

Turner was the owner of Surf City Surf Shop in Wrightsville Beach a business he started with Mark Allison in 1978 and operated for more than 25 years before selling to current owner Mike Barden. The store was a hangout for the town’s surfers a place to swap stories and pick up tips.

“We weren’t just a place where you bought your product ” Turner says. “If there’s such a thing as a boys’ club on the beach that’s what we were. We created this community for everybody. That was kind of my goal. If we could give them a place that was comfortable that’s all that mattered. And luckily I could make a living at it.”

Turner’s contributions to the establishment and progress of Wrightsville Beach’s surfing community were recognized in October when he was inducted into the Wrightsville Beach Museum of History’s Waterman Hall of Fame. Turner received a special recognition award during the ceremony held at the Blockade Runner Beach Resort on Oct. 15.

Diver Ryan McInnis fisherman Sammy Corbett and sailor Dr. Murray Siedel joined him as fellow 2017 honorees. Reggie Barnes was recognized for his contributions to beach culture including his role in bringing outrigger canoes to Wrightsville Beach. Nancy Fahey received the Local Hero award for her contributions as president of the Wrightsville Beach Sea Turtle Project for more than a decade.

This was the fourth class of the Waterman Hall of Fame which was founded by the museum in 2014 as a tribute to the generations of Wrightsville Beach watermen and women whose achievements have shaped the community and its relationship with the water.

Few if any have embodied that spirit better than Turner.

Barden speaking at the induction ceremony recalled favorite “RT” phrases like “What’s shakin’ baby?” and “How’s it going big guy?” all designed to be welcoming.

“He always gave people his time ” Barden says. “He was my mentor and lifelong friend. He was an ambassador for Wrightsville Beach.”

Turner is responsible for many firsts: he put the first webcam at the beach “so us lazy surfers could have our eyes on the conditions ” Barden says; he was the first to sell merchandise online; he helped bring the first national pro event to Wrightsville; and he helped establish the Wrightsville Beach Longboard Association.

But Butler president of wblivesurf.com and Hope From Helen agrees Turner’s most lasting contribution came through his role as mentor and friend.

“I would try to emulate Roy Turner ” Butler says. “I wanted to be just like him. He shaped many many surfers.”

Turner merely treated people the way he was treated when he moved to Wrightsville in the late ’70s.

“It didn’t take me long to find my way to C Street ” he says.

C Street is Columbia Street where the surfers congregated before the sun was up.

“You had to drive down here every morning at 6 a.m. to see if you could surf ” he says. “There’d be a line of cars. We’d all go check to see if there was surf. It was really special.”

Turner was quickly welcomed into the fraternity even if at first the pecking order kept him from the best waves.

“The connections were always there ” he says. “Whether you were hanging around C Street and checking the surf or talking about the swell you became part of something special. That’s what the surfing community at Wrightsville is.”

The word about the special community began to spread outside southeastern North Carolina when Turner and Allison brought the Record Bar Surfabout to Wrightsville Beach in 1984. The event was a stop on the ASP World Tour and brought the top pros to town.

“It was pretty amazing sitting on the pier or sitting on the dock and watching these guys surf ” Turner says. “I don’t think at the time everybody understood what was happening. All of a sudden we’re on the pro tour calendar. We had the best surfers in the world on Wrightsville Beach for three years in a row. It just really opened it up. That was a game-changer for us.”

They surfed at Wrightsville and then went home and told others about the passionate dedicated group that rode the waves off the North Carolina coast.

“He established Wrightsville Beach as a surfing destination ” Barden says.

Turner now works in Atlanta as show director for Surf Expo a twice-yearly trade show for people in the industry. But he hasn’t forgotten his local roots.

“I can promise you when they ask what my home break is I have no problem flying the colors. I’m from Wrightsville Beach ” he says. “There’s a Southern hospitality here a quality of life here that all surfers strive for no matter where they are in the world. I’m so fortunate to have been here.”