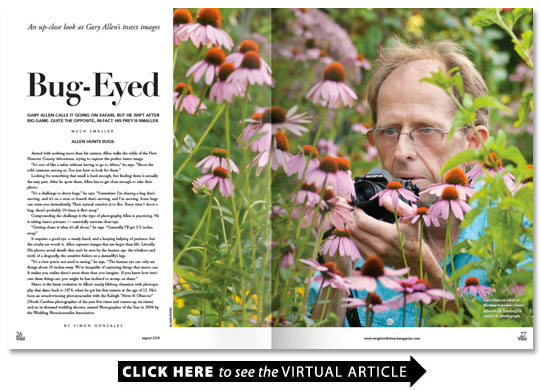 Gary Allen calls it going on safari but he isn’t after big game. Quite the opposite in fact. His prey is smaller.

Armed with nothing more than his camera Allen stalks the wilds of the New Hanover County Arboretum trying to capture the perfect insect image.

“It’s sort of like a safari without having to go to Africa ” he says. “Shoot the wild creatures among us. You just have to look for them.”

Looking for something that small is hard enough but finding them is actually the easy part. After he spots them Allen has to get close enough to take their photo.

“It’s a challenge to shoot bugs ” he says. “Sometimes I’m chasing a bug that’s moving and it’s on a stem or branch that’s moving and I’m moving. Some bugs can sense you immediately. Their natural reaction is to flee. Every time I shoot a bug there’s probably 10 times it flew away.”

Compounding the challenge is the type of photography Allen is practicing. He is taking macro pictures — essentially extreme close-ups.

“Getting closer is what it’s all about ” he says. “Generally I’ll get 3-5 inches away.”

It requires a good eye a steady hand and a heaping helping of patience but the results are worth it. Allen captures images that are larger than life. Literally. His photos reveal details that can’t be seen by the human eye: the whiskers and teeth of a dragonfly the sensitive feelers on a damselfly’s legs.

“It’s a view you’re not used to seeing ” he says. “The human eye can only see things about 10 inches away. We’re incapable of capturing things that macro can. It makes you realize there’s more there than you imagine. If you knew how intricate these things are you might be less inclined to stomp on them.”

Macro is the latest evolution in Allen’s nearly lifelong obsession with photography that dates back to 1974 when he got his first camera at the age of 12. He’s been an award-winning photojournalist with the Raleigh “News & Observer” (North Carolina photographer of the year five times and runner-up six times) and an in-demand wedding shooter named Photographer of the Year in 2004 by the Wedding Photojournalist Association.

His transition from photojournalism to weddings led to a transition from Raleigh to Wilmington. He was traveling throughout the Carolinas and as far as New York to do weddings along with freelance advertising and editorial work. It was work that could be done from anywhere so he headed to the coast.

“My wife and I realized we didn’t have to live in Raleigh anymore ” he says. “We moved down here in 2003 when my daughter was starting high school and loved it. It’s one of the best places in the world. I love the beach I love nature I love the small-town atmosphere.”

He became manager of Southeastern Camera in 2012 a move that contributed greatly to the evolution of his craft.

“Working at the store provided an opportunity to experiment with all kinds of different cameras ” he says. “I worked with cameras that were 150 years old. I took an old Brownie to the State Fair and shot a roll of film.”

The experimentation eventually led to macro photography. He played around with attaching lenses from an old Bolex 16mm movie camera to his digital SLR which allowed him to get close to his subject.

“I got hooked on the macro ” he says. “After work I’d grab a couple of cameras and lenses and head to the Arboretum. Just to relax exploring it with my camera. When I started experimenting with my macro setups the only thing I could find was flowers. I was satisfied but I wanted more. The ‘more’ was the insects. If I could find a bug on a flower that was gold. It sort of fed upon itself. It became a new challenge. It’s fun to take ordinary objects and create interesting photos.”

Allen suddenly found himself with even more time to explore the new hobby when Southeastern Camera’s owner abruptly closed the store in March. He still goes to the Arboretum almost daily but now has the freedom to go at different times of the day. He’s also been to Airlie Gardens a few times has discovered city parks “I didn’t know existed ” and been to Fort Fisher on the hunt for fiddler crabs.

“It’s a great way to get outside and enjoy nature ” he says. “If it’s an animal I’ll probably go after it and take a picture.”

He usually shoots with an Olympus mirrorless DSLR with a zoom lens and a macro adapter. Allen says that setup allows him to capture images from up to 6 inches away; a dedicated macro lens would require him to be 2-3 inches away. That’s still awfully close to a usually uncooperative subject.

“I’ll stand there and see if I see a flash of color a leaf moving to see if there’s any indication of something there ” he says. “I can spot a ladybug at 20 feet now. Those things pop into my view. You have to learn how to fake them out sometimes. I’ve learned to move real slowly when I have to. If I’m patient and give myself a little time I will have that opportunity. Sometimes I sit in a spot and wait for them. Some nature photographers will stake out a spot for hours or days. I’m lucky it’s only a few minutes. Some bugs have predictive habits. They’ll land on the same flower.”

Studying bugs and their habits is a fun part of macro photography.

“Part of the process is learning about insects ” he says. “I want to identify them. I guess that’s the journalist in me.”

The studying isn’t restricted to entomology. Trying to capture images of the little critters also helps the seasoned pro learn more about his craft.

He passes on what he knows by conducting workshops and speaking at meetings of camera clubs.

“I love sharing my knowledge ” he says. “While working as manager of the store that’s what we did on a daily basis. Tips and advice. There’s nothing wrong with sharing your secrets and helping other photographers too.”

Teaching classes is one way to make up for the loss of the steady paycheck. Allen also does freelance work including high-end real estate and collection photography for insurance and archival purposes. He’s working with a company to market his bug photos as wall art.

“There’s all kinds of ways to make a living with a camera ” he says. “I’m exploring what they are.”

One thing he won’t do is get back into the wedding photography business. Insects might be elusive but at least they aren’t demanding.

“Bugs are cooperative subjects. They don’t complain about anything ” he says. “Maybe I’m getting eccentric. I talk to my animals.”

Whatever the future holds he’s certain it will include macro photography.

“I can see myself doing macro for years to come ” he says. “It’s intoxicating. There’s always the possibility of a great image. When you get a close-up detail of something that’s no bigger than your fingernail it’s an accomplishment. There’s always a way to keep improving my bug pictures. Getting closer and closer and closer. Before I was happy to get a butterfly. Now I want the face of the butterfly. I’m looking into microscope lenses so I can get the eye of the butterfly.”