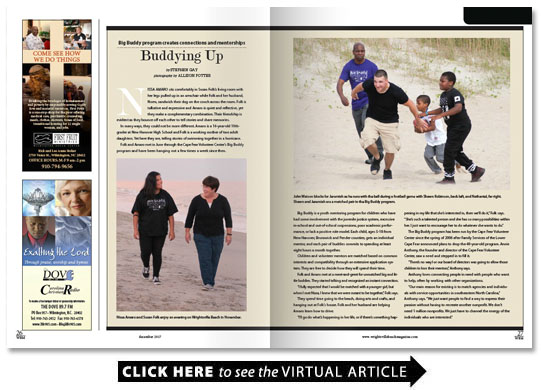 Nissa Amaro sits comfortably in Susan Folk’s living room with her legs pulled up in an armchair while Folk and her husband Norm sandwich their dog on the couch across the room. Folk is talkative and expressive and Amaro is quiet and reflective yet they make a complementary combination. Their friendship is evident as they bounce off each other to tell stories and share memories.

In many ways they could not be more different. Amaro is a 16-year-old 10th-grader at New Hanover High School and Folk is a working mother of two adult daughters. Yet here they are telling stories of swimming together in a hurricane.

Folk and Amaro met in June through the Cape Fear Volunteer Center’s Big Buddy program and have been hanging out a few times a week since then.

Big Buddy is a youth mentoring program for children who have had some involvement with the juvenile justice system excessive in-school and out-of-school suspensions poor academic performance or lack a positive role model. Each child ages 5-18 from New Hanover Brunswick and Pender counties gets an individual mentor and each pair of buddies commits to spending at least eight hours a month together.

Children and volunteer mentors are matched based on common interests and compatibility through an extensive application system. They are free to decide how they will spend their time.

Folk and Amaro met at a meet-and-greet for unmatched big and little buddies. They started talking and recognized an instant connection.

“I fully expected that I would be matched with a younger girl but when I met Nissa I knew that we were meant to be together ” Folk says.

They spend time going to the beach doing arts and crafts and hanging out at Folk’s house. Folk and her husband are helping Amaro learn how to drive.

“I’ll go do what’s happening in her life or if there’s something happening in my life that she’s interested in then we’ll do it ” Folk says. “She’s such a talented person and she has so many possibilities within her. I just want to encourage her to do whatever she wants to do.”

“There’s no way I or our board of directors was going to allow those children to lose their mentors ” Anthony says.

Anthony loves connecting people in need with people who want to help often by working with other organizations.

“Our main reason for existing is to match agencies and individuals with service opportunities in southeastern North Carolina ” Anthony says. “We just want people to find a way to express their passion without having to recreate another nonprofit. We don’t need 1 million nonprofits. We just have to channel the energy of the individuals who are interested.”

The program does just that. It isn’t a place where kids come after school but rather a means to care for children by partnering them with trustworthy positive role models like Janice and Billy Hanna who have been involved with Big Buddy for more than two years.

They love taking their little buddies out on the boat and teaching them about fishing. Layla Simmons Janice’s little buddy has even completed an eight-hour course to earn her boating license. She had never been on the water before Big Buddy but now she loves challenging the Hannas to fishing competitions. Janice says she has seen Layla grow from being an insecure middle school student to a confident preteen who is doing well in school.

For Amaro Big Buddy is an opportunity to meet people from different backgrounds and feel at ease in new places. She and her younger sister Aaliyah recently went to the North Carolina State Fair with Folk and rode a ride that could only be described as “a sideways helicopter blade attached to spinning cages ” she says.

Anthony says the Big Buddy program makes a difference in two main ways: it cares for those affected by societal problems like the opioid epidemic prostitution and gang involvement; and works to prevent those problems from passing on to the next generation by engaging young people in positive ways. Some have parents that are addicts incarcerated and prostitutes. Big Buddy gives them an outlet away from tumultuous home lives.

“These children just need to be engaged and know that the community cares for them ” Anthony says. “If we intervene in the child’s life at a young age we can give them the love and communication skills to find what they are looking for without having to turn to alternative sources like gangs and comfort themselves with extra things.”

Big buddies try to show little buddies more than what they often see immediately around them.

“So many of our kids don’t even realize that they live within 15 minutes of the beach ” Anthony says.

Many big buddies develop a familial attachment with their little buddies.

“As a big buddy you get attached to the children like they’re your own ” Janice Hanna says. “She [Simmons] has been our little girl for a long time. Big Buddy gave her a connection to a family because she didn’t have one.”

Little buddies also feel a sense of family from the program.

Since the Cape Fear Volunteer Center took over in 2006 the program has grown from 40 children to more than 350. Big buddies and little buddies are constantly being paired up but there’s an ongoing need for more mentors. Aaliyah Amaro’s younger sister is still waiting to be matched with a big buddy.

For Amaro and Folk the connection has been just about perfect. They’ve grown close. They both love Christmas and are planning a weekend trip to Busch Gardens in Williamsburg Virginia where they are going to see the largest Christmas light display in North America.

“It’s Christmas and I like everything about Christmas ” Amaro says expressing her excitement.

Amaro might never have experienced the state fair and Busch Gardens if it weren’t for her big buddy. But the benefits go both ways.

“It’s not just for the kids ” Folk says. “Being a big buddy is so rewarding. You get a lot out of it.”