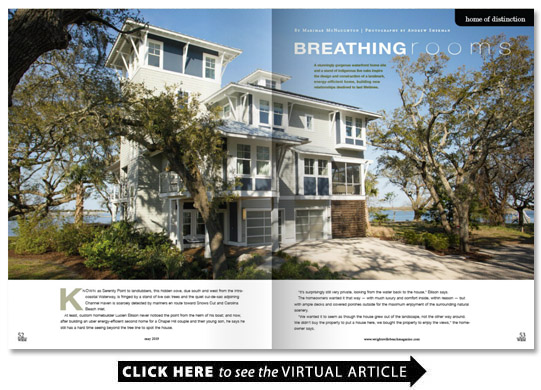 Known as Serenity Point to landlubbers this hidden cove due south and west from the Intra�coastal Waterway is fringed by a stand of live oak trees and the quiet cul-de-sac adjoining Channel Haven is scarcely detected by mariners en route toward Snows Cut and Carolina Beach Inlet.

At least custom homebuilder Lucien Ellison never noticed the point from the helm of his boat; and now after building an uber energy-efficient second home for a Chapel Hill couple and their young son he says he still has a hard time seeing beyond the tree line to spot the house.

“It’s surprisingly still very private looking from the water back to the house ” Ellison says.

The homeowners wanted it that way — with much luxury and comfort inside within reason — but with ample decks and covered porches outside for the maximum enjoyment of the surrounding natural scenery.

“We wanted it to seem as though the house grew out of the landscape not the other way around. We didn’t buy the property to put a house here we bought the property to enjoy the views ” the homeowner says.

In 2014 they committed to working with a Realtor to find the perfect site and hired Evan Barton of Intracoastal Realty to lead the search party.

“It’s the very first lot he took me to ‘ the homeowner says. “I got out of his car saw the 13 breathtaking live oak trees and the water and said ‘if you find me another property as good as this today I’ll give you all the money in my wallet.'”

Relationships are important to the couple already acquainted with Ellison who was one of three builders they planned to meet on site.

“Lucien said ‘I would love to work here every day ‘” the homeowner recalls. They knew right away he would become their builder. From there they began in earnest to interview architects and narrowed the field to a handful.

Because Lucien Ellison had hired Kevin Pfirman to design his personal home Pfirman made the short list. He too remembers the first time he visited Serenity Point. Always keeping a notebook handy the only pen he had in his truck that day was a red felt tip. Regardless he drew the topography and the trees and then sketched a preliminary concept for an exterior with restrained seacoast elements that included an entry tower reminiscent of early 20th century Chatham Style lifesaving stations.

“When they came to meet me at my office I presented that drawing ” Pfirman says. They hired him on the spot.

“Kevin is an artist ” the homeowner says. “We knew that whatever ideas we shared with him about what we wanted or needed would come through that artistic process.”

Not long after the owners contracted Connolly Tree Preservation to tend to the oaks and limb them while Pfirman designed the home with the footprint as far west as possible to avoid disturbance of the species’ sensitivity to root disruption. Flora Landscapes developed an unobtrusive layer of ground covers and shrubs to soften the foundation and blend harmoniously with the indigenous trees.

“One of the most incredible things about the house is that almost every single window has a tree limb right outside making you feel like it’s genuinely a tree house ” the homeowner says.

The home supports a lifestyle of being one with nature at all times whether it’s toweling off on a private balcony adjoining the master suite enjoying a sultry breeze from the screened porch and outdoor grilling station off the kitchen dining al fresco on the elevated porch or enjoying the grounds from an unconditioned room hidden behind mirrored garage doors — that when closed reflect the surrounding landscape — Pfirman has captured every nuance the site offers.

“If you’re going to be sitting out here facing each other ” he reasons standing amid an array of Adirondack chairs “you might as well see what’s behind you.”

Embarking on their third summer in the space the homeowners reflect on how the home design responds to a desire for privacy. Throughout the year they retreat to Serenity Point once a month on average and more frequently in summer. And while they enjoy the company of close friends and family they did not build the house to host large gatherings. With only two guest rooms a master suite and a child’s room and adjoining play area most of the action takes place outdoors.

“We come here to breathe in and breathe out comfortably ” he says.

The clients gave Pfirman carte blanche to develop the maritime themes expressed in functional beams that extend from the interior to the exterior where they are supported by authentic brackets. Pfirman is also responsible for introducing the open whitewashed ceiling trusses that dominate the interior living and dining rooms. This baring-of-bone superstructure is one of the home’s many architectural features that are not only unique but absolutely perfect the homeowner says.

And while the interior palette grounded in the bold contrast of classic navy and bright white is muted with grays that mimic the earthiness of nearby trees the groupings of sleek contemporary furnishings and the uncluttered aesthetic of minimal bark decorative accessories may feel spartan to some yet are very much in keeping with the maritime lifesaving station tone. Those choices were solely the homeowners’ decisions made in full consciousness of the outdoor show. So much so that the full-paned Viwinco windows are undraped.

From the ground level deck and oversized sandbox to the top floor’s secret passageway to the rooftop skybox the architecture frames expansive views of the surrounding waterway the pristine south end of Masonboro Island and beyond that the Atlantic Ocean all the way to the unencumbered horizon line.

The home continues to perform at a high rate of energy efficiency.

“That’s what I’m interested in in terms of homebuilding ” Ellison says “that’s the most fascinating part of it for me.”

One of the methods he used to tighten the envelope was the insulation of the outer stud wall. Ellison explains: insulation is traditionally sandwiched between the studs permitting heat and cold to infiltrate the interior in summer and winter through the uninsulated studs themselves. But he added a layer of polyiso — rigid cell foam insulation or outboard — covering the studs then wrapped the outer walls with sheathing and applied a coat of Tremco’s liquid Enviro-Dri.

He added closed cell spray foam insulation to reinforce the rigidity of the house high performance windows and doors and a Vera hot water reserve system triggered by a motion sensor that’s still being tweaked. Because the home is so airtight Ellison suggested an ERV (Energy Recovery Ventilator) — a fresh air ventilator that continually recirculates fresh air into the house and expels stale air outside — plus an array of 36 photovoltaic panels on the south and east roofs to offset the energy usage. The combined methods materials and systems earned the project a Home Energy Rating Score of 7. The lower the score the better in a market in which a typical code-built home scores an average 100 Ellison says. Six months out of the year the homeowners have only paid the $13 monthly minimum for their 3 642 conditioned square feet. The rest of the energy generated from the pv panels is sold back to the grid.

“Overall Kevin and Lucien designed and built us the most incredible home we ever could have imagined. From an aesthetic perspective everything about the house inside and out reflects our personality and style ” the homeowner says. “We still wake up in the mornings to that master bedroom view and wonder if it’s real.”