There is something magical about spotting a dolphin in the wild something about
the way a dorsal fin slices through the ocean that makes us stop and stare if only to
catch a glimpse of its shimmering arched dive. Such sightings are seasonal north of Cape Hatteras but here in Wrightsville Beach we are fortunate enough to see dolphins off our shores year-round.

The animals we see are bottlenose dolphins and they are as mysterious as they are magical. “They are the species that frequent these shallow near-shore waters ” says Peggy Sloan education curator at the North Carolina Aquarium at Fort Fisher. “We know they migrate but we don’t really know if they’re going north and south or inshore and offshore. If it’s a dolphin of any other species they’re probably sick or stranded.”

Ann Pabst professor of biology and marine biology at UNCW and co-director of the university’s Marine Mammal Stranding Program agrees. “It is rather amazing that we’re still in the discovery phase thinking about how dolphins along our coast move on a seasonal basis. We know that we have animals that appear to live within our region and that they tend to live very close to shore and in the Intracoastal Waterway and that group of animals is probably what we would be able to call our local bottlenose dolphin group.” This group is believed to range as far south as South Carolina and as far north as Beaufort or Cape Hatteras. 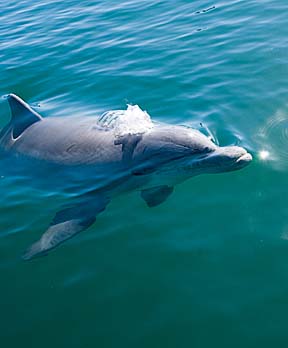 It was once believed that there was a single stock of bottlenose dolphins that migrated from New York all the way down to Florida. Researchers now know that there are multiple groups (also called pods) of animals that inhabit the Atlantic coastal waters due to an ongoing project known as the Mid-Atlantic Bottlenose Dolphin Catalog which is being curated at Duke University by Dr. Kim Urian. By submitting photographs to the central catalog researchers are able to match individual dorsal fin images to determine the different locations where a particular dolphin has been spotted. This enables them to learn something about the range of coastline that animal and its group occupies. More than 4 000 dolphins have been identified through the catalog with images dating back to 1979. Though the exact population size of the Mid-Atlantic coastal group of bottlenose dolphins is unknown the current estimate is around 10 000.

In contrast to the coastal group offshore dolphins are much larger and travel in pods of hundreds. The safety in numbers that a large group provides out in the ocean isn’t necessary for inshore dolphins. The marshes and shallow near-shore waters offer them protection as the threat of natural predators is minimal here.

Just how close to shore do they come? In South Carolina and Georgia bottlenose dolphins have been known to actually beach themselves to feed. This is a phenomenon known as “strand feeding ” which occurs in very few places around the world normally where there is a particularly dramatic tide.

The coastal habitat in North Carolina doesn’t support that type of feeding so when we see dolphins diving just yards from the ocean shore break or swimming alongside our surfboards and sailboats it is most likely to feed or for play. And dolphins do love to play.

Local surfers and beachgoers continuously report seeing dolphins surfing the break alongside human surfers while inshore dolphins follow the tide feeding and playing as they go and can be found in the most commercial of locations — for example in and around the docks at Seapath Marina and in Motts Channel where on a quiet night they can be heard surfacing all along the creek.

It goes without saying that local boaters must proceed with caution. Dolphins can be found in all depths of water and in congested locations and are known to swim in the bow wake of marine craft of all sizes often putting on a show for those fortunate enough to be motoring slowly at the right place at the right time.

Bottlenose dolphins are not just playful they are also very smart. They are the only other animal on the planet that has the same brain to body-size ratio as humans. They eat predominantly spot and croaker but squid crabs and other small marine animals can be part of their diet as well. For the most part they’ll eat whatever they can catch.

And that can be a problem. Despite their intelligence dolphins can’t always distinguish food from synthetic debris in the ocean so human impact can threaten their lives if we’re not careful with our garbage. Stranded marine mammals have starved to death because their stomachs were impacted with plastic. Their consumption of our litter frequently leads to their death.

“Take canvas bags to the grocery store; don’t even be a part of the plastic bag thing ” advises Sloan. “If you care about dolphins then you really have to care for their environment. All of these decisions that make us environmentally conscious citizens are going to make us much better neighbors for dolphins.”

More better-neighbor advice? Never feed a wild dolphin. Beachgoers have been known to feed them hot dogs potato chips and ice-cream cones. Clearly humans don’t generally keep a supply of safe and suitable dolphin food on hand. Pabst offers another practical reason not to feed them. “We don’t want dolphins to become habituated to humans feeding them because that means they might think it’s okay to start approaching humans and no matter what dolphins are big powerful wild animals.”

In fact it is illegal for a human to approach a dolphin in the wild. The Marine Mammal Protection Act enacted in 1972 keeps dolphins from being hunted or injured. “When humans enter that world they’re really kind of invading the natural environment of that species ” says Pabst. “All marine mammals are afforded protection. We do that so we don’t interrupt their daily life because it’s really a form of harassment.”

Bottlenose dolphins in the wild can live an average of 50 years a remarkably long lifespan for an animal. “That brings it into a time scale that’s familiar to us as humans ” says Pabst. “Think about a family that’s lived in the Wilmington area all their life who have raised their kids and grandkids here. These animals are doing the same thing. It puts us in a special place of respect and honor to be able to give them the space they need to live their lives here.” We are fortunate to share our environment with these beautiful and captivating animals. If we give them the respect they deserve we should be able to enjoy them for a long time to come.