We forget at times that we domesticated animals for a reason. When it comes to dogs for example its easy to lose sight of the fact that they werent bred just to lounge at our feet in silent adoration as we watch television or to provide us with companionship on a brisk walk. Our dogs though have not forgotten. 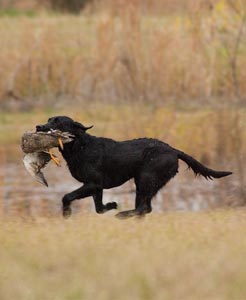 On a cold rainy weekend in early December 2009 119 Labrador Retrievers from as far away as Bartonville Texas Ann Arbor Michigan and Addison Maine gathered on a 1 250-acre tract of land in Rocky Point to participate in a series of field trials designed to test their individualized skills at retrieving animals killed in the process of a hunt. Under the auspices of the Cape Fear Retriever Club these field trials like hundreds of others conducted nationwide will earn many of these animals American Kennel Club (AKC) points which can qualify them for national competition.

As owners and spectators stand hunched under umbrellas in the cold rain sipping coffee waiting for the trials to begin two judges consult a list of dogs registered for the trial and call their extended AKC names out toward the wet shivering crowd.

“FC-AFC Trumarcs Lindsey ” shouts a judge. He waits as owner/handler current treasurer and former president of the Cape Fear Retriever Club Andrea Meisse steps to a “start” position with the dog she calls “Lindsey” at her side.

As the retriever watches ducks (already deceased) are thrown into the air at three locations in the near middle and long distance. The tosses are accompanied by a gunshot to replicate a hunt. The animal sits at its handlers side eyes alert body tense awaiting a command. Released the animal dashes off into the open field with about as much thought to the cold rain as a child gives to a lack of sleep on Christmas morning. One at a time the dogs retrieve the ducks returning them to their handlers and heading back into the field until all three (or more depending on the field trial format) have been retrieved.

“I do this for the dogs ” says Meisse of Rocky Point whos brought four of them to these trials. One of these dogs Gunzup Salty Dog or as hes called “Cappy” acts as a “test dog” for the Amateur trials. Cappy is sent out ahead of the trials to determine whether the various blinds (locations where the ducks are released) are reasonable and adequate for the task at hand. 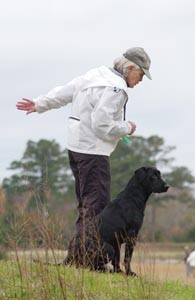 “They love it so much ” Meisse says. “Id have nothing to do with this otherwise. Ive taken them to obedience and agility trials but its just not the same. Weve bred them to do things and now we want them just to sit at our feet watching television.”

It should be noted that these AKC Field Trial events for retrievers are first and foremost a sport. Developed in the late 1920s and 30s by a small group of avid hunters who sought a means by which they could evaluate the performance of their hunting retrievers in a competitive environment these trials now stretch nationwide. There are some 250 of them yearly including an annual National Open Championship event most recently held in November 2009 in Dover Delaware.

The receipt of what are known as “Championship Points ” leading to a Championship Title has practical as well as prestigious significance. The offspring of an AKC-registered Labrador Retriever with a championship title notch on its “belt” will be sold for considerably more money than a similar dog without such a parent in amounts that can climb into the thousands of dollars.

For John Thomas one of the original founders of the Cape Fear Retriever Club and its current field trial/corresponding secretary the acquisition of a Labrador Retriever was undertaken with somewhat more functional considerations in mind.

“I was an avid duck hunter ” Thomas says “and I needed something to pick up the ducks.” 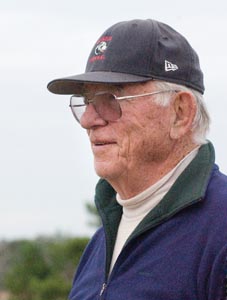 About 25 years ago while still president and chairman of the board of directors of the Thomas Bus Company (credited with the invention of the now ubiquitous yellow Thomas school bus) Thomas bought a Labrador Retriever to bring in his ducks. He discovered that his skills as a trainer were limited and hired a professional to do the job. Hes been at the sport ever since and has owned about nine title dogs.

“The point is to first of all attain a title for the dog; either Amateur Field Champion or Field Champion ” Thomas says. “The field trials are part of that whole procedure and you get a certificate and I guess what youd call bragging rights.”

In conjunction with his work as an owner of these dogs over the years Thomas owns the land on which the Rocky Point field trials are conducted. Area dog owners use the land regularly for training purposes as well.

“My sons and I have placed this 1 250 acres (in Rocky Point) under whats called “conservation easement” with the North Carolina Coastal Land Trust ” Thomas says. “Its the largest land trust in the state of North Carolina and assures that this tract of land will never be developed for either residential or commercial use.”

Like Thomas current Cape Fear Retriever Club President Sam Franklin of Wilmington got into the sport for reasons not associated with attaining championship points or a title for his dog. Retired from DuPont in Leland Franklin took on a part-time job working on Cape Fear Community Colleges research vessel Dan Moore a component of that schools marine technology program. This put him at sea three or four months a year and left his wife at home. Having owned Labrador Retrievers before as household pets Franklin bought another one to keep his wife company during his sea-going voyages. While trying to train the animal in simple obedience Franklin discovered that the lab he called “Hal” was a little more dog than he could handle and he got in touch with Bruce Koonce a trainer on John Thomas farm.

“He (the dog) was capable of much more than just being a house pet ” says Franklin “and it was Bruce who recognized that potential in him.”

Franklins position as president of the local club (a position he refers to as a “figurehead”) is less about his particular qualifications in regards to the sport and more about his willingness to fulfill a needed role in the organization.

“I didnt aspire to be president ” Franklin says. “It was just something that they needed to be done and they asked me to do it.”

Carroll Niesen of Wilmington who acted as a judge for the qualifying event at the most recent field trials attained her position in a similar way.

“Someone asked me to judge ” Niesen says. “Clubs are always looking for people to judge because most people dont want to do it.”

As a dog owner and field trial judge Niesen is keenly aware that while Labrador Retrievers are more or less designed to retrieve not all of them catch on to the idea right away. Some in fact may never catch on.

“My first dog back in the 90s took nearly four months before hed retrieve anything. We didnt work with ducks. We used what they call “bumpers;” dummies really. They look like those things you throw over the side of a boat to keep it from hitting against the dock ” Niesen says. “He might go out and look at it but hed be sitting there looking at me like he was thinking: You threw it out there you go pick it up yourself.”

According to Niesen field trial judges are looking for what are called good markings on the part of the dog. “Youre looking for a dog that can remember where the birds were and can go to them or to the area and have sort of a tight hunt and find the bird ” she says adding that obedience at the start as characterized by the animal waiting for a word from a handler before “breaking” out in search of the duck is important as well.

Then too any given animal on any given day might not perform to the best of his or her ability. Like humans theyre subject to good days and bad days.

“Something that people have to get used to in the field trial game is that in order to do any winning at all you have to do a lot of losing ” Niesen says. “The dog doesnt always perform the way youd like him to.”

John Thomas still oversees the areas local field trials (assuring their continuation by conserving his own land for the purpose) but he also finds time to take his animals out for a round of actual hunting. At 82 years young Thomas speaks of the field trial sport with an energy that belies his years. His secret? “Its this outdoor life that keeps me spry.”