Booming Interest: The Mystery of the Seneca Guns 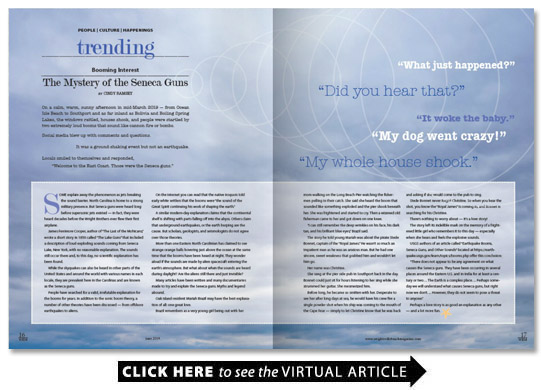 On a calm warm sunny afternoon in mid-March 2019 — from Ocean Isle Beach to Southport and as far inland as Bolivia and Boiling Spring Lakes the windows rattled houses shook and people were startled by two extremely loud booms that sound like cannon fire or bombs.

Social media blew up with comments and questions.

It was a ground-shaking event but not an earthquake.

Locals smiled to themselves and responded “Welcome to the East Coast. Those were the Seneca guns.”

Some explain away the phenomenon as jets breaking the sound barrier. North Carolina is home to a strong military presence. But Seneca guns were heard long before supersonic jets existed — in fact they were heard decades before the Wright Brothers ever flew their first airplane.

James Fenimore Cooper author of “The Last of the Mohicans ” wrote a short story in 1850 called “The Lake Guns” that included a description of loud exploding sounds coming from Seneca Lake New York with no reasonable explanation. The sounds still occur there and to this day no scientific explanation has been found.

While the skyquakes can also be heard in other parts of the United States and around the world with various names in each locale they are prevalent here in the Carolinas and are known as the Seneca guns.

People have searched for a valid irrefutable explanation for the booms for years. In addition to the sonic boom theory a number of other theories have been discussed — from offshore earthquakes to aliens.

On the internet you can read that the native Iroquois told early white settlers that the booms were “the sound of the Great Spirit continuing his work of shaping the earth.”

A similar modern-day explanation claims that the continental shelf is shifting with parts falling off into the abyss. Others claim that underground earthquakes or the earth burping are the cause. But scholars geologists and seismologists do not agree over those theories.

More than one Eastern North Carolinian has claimed to see strange orange balls hovering just above the ocean at the same time that the booms have been heard at night. They wonder aloud if the sounds are made by alien spacecraft entering the earth’s atmosphere. But what about when the sounds are heard during daylight? Are the aliens still there and just invisible?

Many articles have been written and many documentaries made to try and explain the Seneca guns. Myths and legend abound.

Oak Island resident Mariah Brazil may have the best explanation of all: one great love.

Brazil remembers as a very young girl being out with her mom walking on the Long Beach Pier watching the fishermen pulling in their catch. She said she heard the boom that sounded like something exploded and the pier shook beneath her. She was frightened and started to cry. Then a wizened old fisherman came to her and got down on one knee.

“I can still remember the deep wrinkles on his face his dark tan and his brilliant blue eyes ” Brazil said.

The story he told young Mariah was about the pirate Stede Bonnet captain of the “Royal James.” He wasn’t so much an impatient man as he was an anxious man. But he had one sincere sweet weakness that grabbed him and wouldn’t let him go.

Her name was Christine.

She sang at the pier side pub in Southport back in the day. Bonnet could just sit for hours listening to her sing while she strummed her guitar. She mesmerized him.

Before long he became so smitten with her. Desperate to see her after long days at sea he would have his crew fire a single powder shot when his ship was coming to the mouth of the Cape Fear — simply to let Christine know that he was back and asking if she would come to the pub to sing.

Stede Bonnet never forgot Christine. So when you hear the shot you know the “Royal James” is coming in and Bonnet is searching for his Christine.

There’s nothing to worry about — it’s a love story!

The story left its indelible mark on the memory of a frightened little girl who remembers it to this day — especially when she hears and feels the explosive sounds.

USGS authors of an article called “Earthquake Booms Seneca Guns and Other Sounds” located at https://earthquake.usgs.gov/learn/topics/booms.php offer this conclusion:

“There does not appear to be any agreement on what causes the Seneca guns. They have been occurring in several places around the Eastern U.S. and in India for at least a century or two… The Earth is a complex place. … Perhaps someday we will understand what causes Seneca guns but right now we don’t. … However they do not seem to pose a threat to anyone.”

Perhaps a love story is as good an explanation as any other — and a lot more fun.