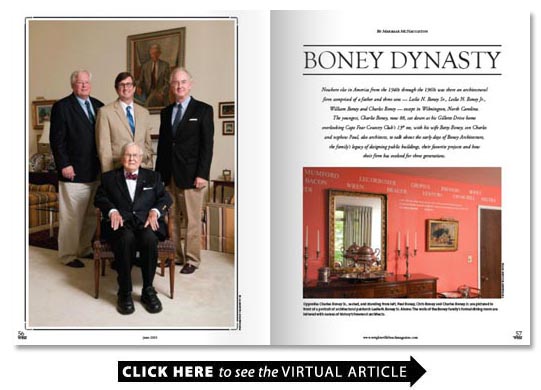 Nowhere else in America from the 1940s through the 1960s was there an architectural firm comprised of a father and three sons Leslie N. Boney Sr. Leslie N. Boney Jr. William Boney and Charles Boney except in Wilmington North Carolina. The youngest Charlie Boney now 88 sat down at his Gillette Drive home overlooking Cape Fear Country Clubs 13th tee with his wife Betty Boney; son Charles and nephew Paul also architects to talk about the early days of Boney Architecture the familys legacy of designing public buildings their favorite projects and how their firm has evolved for three generations.

WBM: What do you think was different about your childhood growing up in a family with a father who was an architect?

Charlie: The childhood growing up was all about the Depression very much so. Father put together things very well bicycles tennis racquets.

Charles: Wasnt it your mother who said: Tell me what you think you need and Ill tell you how to do without it.

WBM: Was there any precept tenet or philosophy that characterized a family that produced three sons who all became second-generation architects?

Betty: I think its genetic.

WBM: Could we say youre wired for architecture?

Charlie: When I went to architectural school occasionally my classmates when somebody was asking about me theyd say Oh yeah he was born with a golden T-square in his mouth.

Boney Architecture began with a two-person office in the Murchison Building and moved to the dining room table during the Great Depression to the drafting room at 120 South Fifth Street.

Charlie: My father had a US Navy [contract] to survey the site for Camp LeJeune. He had to have automobiles for the surveyors. When the project was over I had ten 1936 Fords in my backyard. All I had to do was switch batteries; I didnt have but three batteries for all those ten.

Our drafting room was overlooking my mothers garden where Dad stored all those ten Fords. And so in the drafting room he said Charlie come in here. At that point I had the hood up on one of those Fords and was changing the spark plugs. Dad said Come in here and draw for me and Ill hire somebody to put those spark plugs in. Thats how I started out.

Charlie Boney was 16 at the time and still in high school. That first assignment from his father became the site plan for what is now the Historic Hannah Block USO.

Charlie: It was a prototype USO. All we had to do was site it.

The year was 1940. It was Charlie Boneys first project. He used a T-square to complete the drawings on 36-inch paper. The drafting room had been an addition on the back of the familys three-story home.

Paul: Its where we ate Sunday lunch Thanksgiving Christmas. Sunday lunches all the kids would go downstairs and play in the office. Wed color we would draw.

Charlie: Their grandmother [Mary Lily Hussey of Wallace] would very often have them for lunch on Sunday and when lunch was over theyd go down in the drafting room and started using the T-square.

Charles: It was normal to us.

Paul: Trust me we had a very normal childhood. There were just options to entertain yourself and play that maybe was different.

WBM: When did you first know you would pursue architecture as a career?

Paul: I was probably 12 or 14. I was intrigued. I was drawn to it by a natural inclination to be able to draw and watching Uncle Charles Daddy and Uncle Les do what they did.

Pauls first project was NCNB now Bank of America at the corner of Oleander Drive and Independence Boulevard.

WBM: Is it fair to say that your familys hallmark is designing spaces the public will use as opposed to private residences?

Charles: One of the great things our grandfather [Leslie Boney Sr.] did was finding that niche in education. It was a calling for him to figure out how to educate kids. He was born in Duplin County and saw that need. He also was in several practices where schools were being built. He was also an architect at that time in North Carolina when we were really discovering what public education was all about.

He did houses as well but I think schools were the biggest portion of his practice and we all kind of fell into it Dad particularly coming out of World War II when the nation had to have more schools.

WBM: What are the inherent design challenges about that kind of architecture that requires design to move large groups of people through interior spaces?

Charles: Theres a level of responsibility there that I think you have with a public building thats different in working with and for the public. Youve got clients that are this high (holding his hand about three feet above the floor) and they dont know how to tell you what they want so you have to figure it out. Youve got clients that are much bigger with some expectation of firmness commodity and delight which translates into budget budget budget. Its just inherent that were going to put a building out there thats going to serve the public for 50 years or more. We hope more.

Leslie Boney Sr. designed Grainger High School in Kinston in 1924. Charlie Boney designed the replacement high school in 1974 and returned in 1995 and added a theater to the high school that is now being adapted for reuse as a retirement home.

Charles: Its interesting to see the continuity there. The point is its like Hanover High School. Its still there. Its being actively used. The two reasons its being actively used: one it was well built and second the public loves it. You cant imagine today the thought of tearing down a building like that.

New Hanover High School was the project that brought Leslie Boney to Wilmington in 1922.

Charlie: Then we added on Brogden Hall to that particular facility.

Paul: One of the legacies of our firm is that all three generations have touched that building. Charles and Chris and I did a renovation of the building ten years ago.

There are multiple generations of architects and not just us but people that Charlie attracted to the practice as it began to grow that were very talented architects that became that family of Boney Architects.

Charlie: I brought three young architects from NC State with me when I graduated. They stayed and became architects on their own in Wilmington: Herb McKim Frank Ballard and Bob Sawyer.

Paul: Thats the other legacy of the firm the number of firms that have become graduated and gone on to found their own very successful firms on the basis of the things that Charlie Uncle Les and Daddy taught. One thing that you get that always comes through is that sense of integrity that sense of doing the right thing for all the right reasons; thats one thing youll always get from my Uncle Charles; hell always tell you the truth always had that sense of integrity that is so important when dealing with the public and they knew that they could trust him.

That integrity Paul says has to do with the way Charlie Boney practices his architecture and the way he lives his life every day.

Paul: It really is a great thing when youre doing public buildings and theyre trusting you with millions of dollars.

WBM: What are your favorite projects?

Charlie: Kinston High School thats one of my favorites. All the buildings are in a geometrical shape. Not just a rectangle triangles. The building Im proudest of is Cooperative Savings and Loan at Second and Market [now occupied by First Bank].

The president of the bank let me design everything for the bank. I tell people somewhat facetiously that I actually selected ashtrays for the building.

Charlie: The chairs in the small kitchenette and lounge were small Bertoia chairs.

Charles: The bank was fitted with icons of modern design. It was the quintessential modern bank in North Carolina at that time.

Paul: One of my favorite projects was the Kenan Chapel at Landfall and the other one would be the house I did for Mr. Kenan. I really enjoyed working with the client and that scale [of a] project. It was a great collaboration between Mr. Kenan and Harvey Gunter an interior designer in Durham. Harvey is a genius and he had done two or three homes for Mr. Kenan and knew what he liked what they expected. Thats one of the great things about architecture is the collaboration between different design professionals and that house is a result of that.

Charles: Another thing is the friendships that Dads made that Pauls made that Ive made all across the state. Dad was president of AIA [American Institute of Architects] so was Paul and his brother Leslie before him.

Charlie: Charles has been on the board of AIA and also is president of the Design Guild of NC State College of Design.

One of Charles Boneys most interesting projects is Proctor Library at Flagler College in St. Augustine.

Charles: Flagler College is centered in a building that Henry Flagler built as a hotel. It was his first hotel in Florida when he was taking the railroad down into Florida and finally ended up in Key West. It became Flagler College in the 60s and its a magnificent old building Spanish Moorish a very exuberant thing with terra cotta and lots of textured stucco. We got to go inside and make a thoroughly modern library.

WBM: You grew up in a historic home; you participated in the founding of the Historic Wilmington Foundation but your familys architectural style is known for public buildings that lean toward modern.

Paul: There is a versatility that really was based on the client need not on one particular style. Some architects are going to do what theyre doing.

The greatest thing I learned from Charlie was to listen. The ability to translate what the owner was saying into the reality of a building Charlie Boney was a master at doing that. And he drew so incredibly well that he thought with that pencil and was then able to translate something that they were telling him into a physical drawing that they could see. Thats what that vision of an architect is really all about. And thats what he taught us.