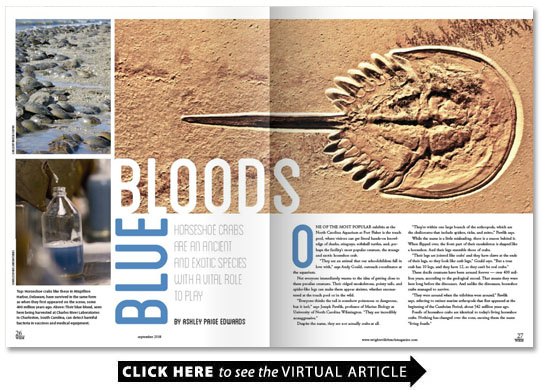 One of the most popular exhibits at the North Carolina Aquarium at Fort Fisher is the touch pool where visitors can get literal hands-on knowledge of sharks stingrays softshell turtles and perhaps the facility’s most popular creature the strange and exotic horseshoe crab.

“They are an animal that our schoolchildren fall in love with ” says Andy Gould outreach coordinator at the aquarium.

Not everyone immediately warms to the idea of getting close to these peculiar creatures. Their ridged exoskeletons pointy tails and spider-like legs can make them appear sinister whether encountered at the touch pool or in the wild.

“Everyone thinks the tail is somehow poisonous or dangerous but it isn’t ” says Joseph Pawlik professor of Marine Biology at University of North Carolina Wilmington. “They are incredibly nonaggressive.”

Despite the name they are not actually crabs at all.

“They’re within one large branch of the arthropods which are the chelicerates that include spiders ticks and mites ” Pawlik says.

While the name is a little misleading there is a reason behind it. When flipped over the front part of their exoskeleton is shaped like a horseshoe. And their legs resemble those of crabs.

“Their legs are jointed like crabs’ and they have claws at the ends of their legs so they look like crab legs ” Gould says. “But a true crab has 10 legs and they have 12 so they can’t be real crabs.”

These docile creatures have been around forever — over 400 million years according to the geological record. That means they were here long before the dinosaurs. And unlike the dinosaurs horseshoe crabs managed to survive.

“They were around when the trilobites were around ” Pawlik says referring to extinct marine arthropods that first appeared at the beginning of the Cambrian Period about 542 million years ago.

Fossils of horseshoe crabs are identical to today’s living horseshoe crabs. Nothing has changed over the eons earning them the name “living fossils.”

“They’re doing something right. There’s something about them that makes them really successful ” Gould says.

Not only are they harmless to humans they are incredibly helpful. It’s in their blood. Literally.

Horseshoe crab blood — its color a lovely Carolina blue — is used to detect dangerous bacteria such as E. coli in injectable drugs implantable medical devices and hospital instruments including scalpels and IVs. The blood coagulates when it comes into contact with bacterial endotoxins letting scientists know that the vaccine or piece of medical equipment is not safe to use on patients.

The harvesting of horseshoe crab blood is a $112 million a year industry with a quart going for as much as $14 000. The biomedical industry bleeds about 500 000 crabs a year at places like Charles River Laboratories in Charleston South Carolina. Horseshoe crabs are caught in the wild about a third of their blood is extracted and they are returned to the ocean.

But not every creature survives the procedure. Mortality rates are as high as 30 percent a factor in declining population rates.

“We are seeing their populations drop a little bit. In the international listing they’re listed as vulnerable ” Gould says.

Demand is growing each year but a synthetic has been developed that could eliminate the need to harvest blood from horseshoe crabs.

The harvesting of their blood is not the only cause for the decline.

“Their populations are a small fraction of what they once were less because of the harvesting for their blood but more because people have harvested them and killed them for a long time as bait for blue crab traps ” Pawlik says.

Rules and regulations were placed on the harvesting of horseshoe crabs to slow the decline.

“There is a panel of marine fisheries along the East Coast that monitors their populations and regulates when they’re taken for medical use and used as bait in lobster fisheries so they regulate how many you can take for bait purposes ” Gould says. “They are trying to make sure they don’t turn into an endangered species and that we don’t deplete them too far.”

That’s important not just for their role in human health but because of their place in the ecosystem.

“They are a predator for worms and clams so they kind of control that population ” Gould says. “They are then eaten by sharks and turtles [and] if you love sea turtles and you love sharks then you know they need food. [Horseshoe crabs’] eggs are providing a food source for birds and lots of other animals out there so if they disappear then we see this big imbalance in the ecosystem.”

Female horseshoe crabs can lay 100 000 eggs during spawning season but the odds are against them hatching and surviving. Only a couple of that number make it to adulthood Gould says. Most are eaten by migratory seabirds.

The habitat for the American horseshoe crab extends from Mexico to Maine.

The best chance of seeing them locally is to go to the aquarium.

These creatures are a unique and essential species. Their oddities make them special and their medical and ecological role make them irreplaceable.

“They are really important components of the ecosystem that should be left alone ” Pawlik says.