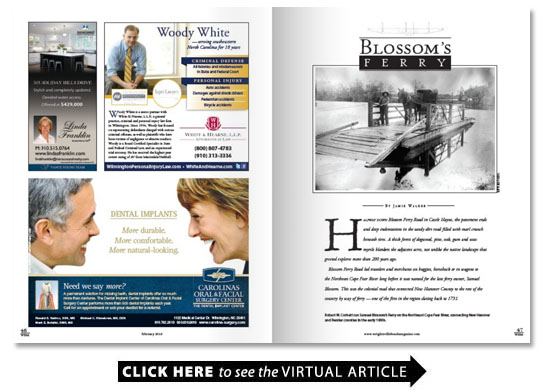 Halfway down Blossom Ferry Road in Castle Hayne the pavement ends and deep indentations in the sandy dirt road filled with marl crunch beneath tires. A thick forest of dogwood pine oak gum and wax myrtle blankets the adjacent acres not unlike the native landscape that greeted explores more than 200 years ago.

Blossom Ferry Road led travelers and merchants on buggies horseback or in wagons to the Northeast Cape Fear River long before it was named for the late ferry owner Samuel Blossom. This was the colonial road that connected New Hanover County to the rest of the country by way of ferry one of the first in the region dating back to 1731.

Today the only evidence of a ferry landing is a depression in the wooded swampy bank of the Northeast Cape Fear River not far from the Dan Cameron Bridge. All other visual evidence of the riverine transport that linked New Hanover and Pender counties has disappeared leaving only tree stands and tangling strands of poison ivy that cover any remaining trace of Blossoms Ferry.

The landscape was scarcely different in 1979 when the late Wesley K. Hall then a graduate student of maritime history and underwater research at East Carolina University searched for a subject for his thesis.

That year when Hall made his first reconnaissance dive on Blossoms Ferry landing he discovered artifacts from two ferries that included hull sections tool-marked floor planks fasteners joints stanchions aprons and hand tools. With support from the National Trust for Historic Preservation Hall collaborated with ECU professor Gordon Watts and other graduate students and in 1983 from Murphy Base a 56-foot LCM (a mechanized landing craft) anchored near the site they surveyed the remains. The underwater research lasted five weeks and spawned investigations and model reconstructions that spanned two years.

Cooking implements and hand tools like a lead-glazed red-clay earthenware crock fragments of a creamware plate and a three-legged cast iron Dutch oven pipkin dated the oldest ferry to the early 18th century. Dark green glass bottle fragments transfer-printed ceramics and an axe helped to date a second ferry to the turn of the 18th century.

Despite the difference in age the two vessels were similar in construction. Tool marks suggested the same technology pit and sash saws cut the lumber used to build them. The tool marks were also used to confirm dating. Hand-wrought iron hinges used to attach aprons were four feet long on the earlier vessel situated to the east and two-feet long on the older vessel situated to the west. Archeologists concluded that aprons were attached to unload and load traffic. A third ferryboat wagon parts and the remains of a bridge were also discovered.

Halls thesis An Investigation of Blossoms Ferry on the Northeast Cape Fear River suggests the presence of a ferry on the Blossom site by 1733 operated by John Marshall for a decade. The ferry changed hands eight times between Marshalls time in 1733 to Blossoms in 1882.

In 1755 the ferry was gifted to Captain Benjamin Heron by his father-in-law John Howe. Heron was responsible for the construction of a drawbridge decreed by the colonial assembly in 1766.

A British traveler Miss Janet Schaw described Herons drawbridge in her Journal of a Lady of Quality in 1776.  Following descriptions of the great road that connected Wilmington to the plantations of the Northeast Cape Fear River she wrote that Captain Herons bridge tho built of timber is a truly noble one broader than that over the Tay at Perth. It opens at the middle to both sides and rises by pullies so as to suffer Ships to pass under it.

British soldiers destroyed Herons bridge shortly after the occupation of Wilmington by Lord Cornwallis in 1781. It is thought that Elizabeth Heron McKenzie and her husband John were responsible for reconstructing the drawbridge a Big Bridge having appeared on an 1808 map.

Confederate General Braxton Bragg and his troops possibly destroyed the Big Bridge as they fled the region via the Northeast Cape Fear River in 1865. By 1866 Jackson Woods deed included the Ferry known as Big Bridge Ferry which Wood and his son John E. Wood operated and maintained until they sold it in 1882 to Margaret Sophia Blossom wife of Samuel Blossom a Portuguese immigrant of the Madeira Islands.

In 1887 The Morning Star reported Blossoms plans to build a small hotel at Castle Haynes to accommodate the travel over the northeast ferry but that never came to fruition. On February 12 1898 The Morning Star stated that Blossom leased operation of the ferry to Pender county commissioners. In 1902 an account from The Evening Dispatch on May 31 reported a dispute over fee payment for cows that jumped in to the river and swam across to the others instead of waiting their turn. The Morning Star reported that ferry fees had been set by Pender county commissioners at a nickel for a person on foot a dime for a person on a horse 13 cents for a two-wheel cart and 18 cents for a four-wheel buggy. Goats sheep and hogs were five cents each but heifers were six and a half. In the 1902 newspaper story Blossom insisted the owner of the cattle pay for each of the head that swam across the river threatening the farmers arrest. The same year Blossoms Ferry was sabotaged when ferry cables were cut in the middle of the night.

Accounts of ferry mishaps including robbery arson theft vandalism and even accidental death by drowning are stacked in a thick file in the North Carolina Room at the New Hanover County Library in downtown Wilmington.

On March 31 1905 The Semi-Weekly Messenger reported that Blossom owned property all over New Hanover and Pender counties equaling nearly 3 500 acres and had grand plans to make a name for Castle Hayne. He hired local farmer Robert W. Corbett to run the ferry. Corbetts granddaughter Belle Anton cited memories of helping Corbett pull the ferry hand-over-hand from bank to bank in a July 1984 article in the Wilmington Star.

Approaching his 70s around 1905 Blossom then known as old man Blossom decided to turn over ferry operations and settle into running a grocery store on the Castle Haynes (now Castle Hayne) side of the river a big general store a county store said granddaughter Edelweiss Mishoe to a Morning Star reporter in 1984.

By the time of Blossoms death in 1926 a state-maintained bridge one mile west of the ferry landing eliminated the need for the riverine transport that had spanned nearly 200 years.

With the discovery of Blossoms Ferry Halls research remains historically relevant. Not long after he completed his work at the Blossoms Ferry site in 1983 he decided to make the area his home. He purchased property at the other end of Blossom Ferry Road less than a half mile downriver from the ferry site in the mid 80s which would remain his home base until his death in August 2012.

Halls boat Black River still rises and falls with the tide at his dock.