Blooming with History: Gardens with a Family Connection 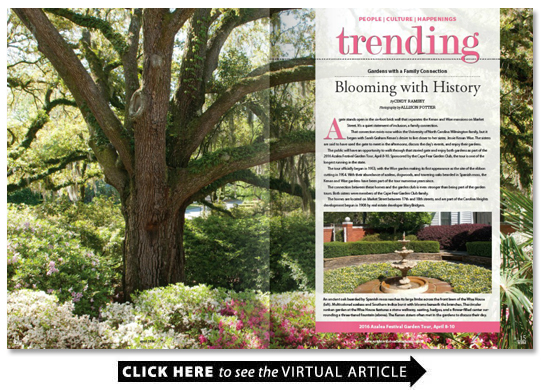 A gate stands open in the six-foot brick wall that separates the Kenan and Wise mansions on Market Street. It’s a quiet statement of inclusion a family connection.

That connection exists now within the University of North Carolina Wilmington family but it began with Sarah Graham Kenan’s desire to live closer to her sister Jessie Kenan Wise. The sisters are said to have used the gate to meet in the afternoons discuss the day’s events and enjoy their gardens.

The public will have an opportunity to walk through that storied gate and enjoy both gardens as part of the 2016 Azalea Festival Garden Tour April 8-10. Sponsored by the Cape Fear Garden Club the tour is one of the longest running in the state.

The tour officially began in 1953 with the Wise garden making its first appearance as the site of the ribbon cutting in 1954. With their abundance of azaleas dogwoods and towering oaks bearded in Spanish moss the Kenan and Wise gardens have been part of the tour numerous years since.

The connection between these homes and the garden club is even stronger than being part of the garden tours. Both sisters were members of the Cape Fear Garden Club family.

The homes are located on Market Street between 17th and 18th streets and are part of the Carolina Heights development begun in 1908 by real estate developer Mary Bridgers.

Kenan started expanding the boundaries of the 100-foot by 200-foot property immediately by purchasing an extra 50 feet of an adjacent property. In 1924 and 1925 she purchased additional parcels on 17th Street including a house now known as the Padrick House.

But perhaps the purchase that thrilled her most was that of the property that separated hers from her sister’s home. When it went up for sale in the 1930s the property was purchased and the house torn down making the sisters true neighbors.

Steve Pickard project manager for UNCW says photos prior to Kenan’s ownership indicate she was the first owner to formally landscape the property. To design her gardens she hired Earle S. Draper a renowned landscape architect.

December 1923 drawings for the front and side lawns include a croquet lawn on the 17th Street side and a brick wall that surrounds the entire property. The lush sweeping grassy lawn bordered by tall shade trees and numerous shrubs and flowers could easily have hosted a croquet match or Easter egg hunt or many other family gatherings. Only a little imagination is needed to envision that scene in the 1920s or ’30s.

A 1931 fire heavily damaged the home. During renovations the following year Draper created a revised planting plan for the front and side yards — still including the croquet lawn — and a design for an enclosed garden at the back of the home. The marble fountain and benches in this garden were purchased in Italy during one of Kenan’s many travels abroad.

Much less is known about the history of the gardens at the Wise House but a 1972 Lower Cape Fear Historical Society bulletin mentions a large marble mantel in the Kenan House as having come from Wise’s garden. She too had traveled to Italy and purchased this treasure that was part of her gardens for many years before being transferred to her sister’s entrance hall.

Sarah Graham Kenan and Jessie Kenan Wise both died in 1968. Subsequently Kenan family heirs donated both properties in separate transactions to what was then Wilmington College now the University of North Carolina Wilmington.

The Kenan House has since been the home of the university’s chancellor and family. After much renovation and repair the Wise House became home to the UNCW Alumni Association.

The Kenan House grounds of 2016 are remarkably similar to Draper’s drawings completed in 1923 and 1932. Through the front gate garden tour visitors will travel the herringbone brick walkway bordered by boxwoods and sheltered by branches of ancient live oaks around the side of the home to the west lawn that could still host a croquet match. It is bordered by shade trees flowering trees and shrubs and an abundance of flowers to include pansies daffodils tulips and of course azaleas. A rose garden was added last fall at the end of the brick walkway.

Draper’s enclosed garden design also has changed very little since 1932. The brick of the back porch and walkways still includes the herringbone pattern shown in the early drawings. The marble fountain and benches although restored are the same ones purchased in Italy. This enclosed garden is now known as the White Garden as all the flowering plants there bloom only in white — the dogwoods azaleas tulips daffodils and mums among others.

The east side of Kenan House boasts a domed solarium that overlooks a manicured lawn bordered in a variety of holly trees hydrangeas azaleas camellias and many other flowers. The driveway bordered by pansies with the promise of flowering annuals runs along the brick wall and onto Market Street through a wrought iron gate.

“The gardens of the Kenan House are built to bloom throughout the year not just one season ” says Chris Randall UNCW landscape superintendent.

But much emphasis has been placed on spring blooms this year in preparation for the Azalea Festival tour and other upcoming events.

“It will be spectacular ” Randall says.

Also from this east side of the Kenan House the Wise House is accessible through that gate built in the wall by sisters who wished to stay close. Through that gate visitors immediately approach the sunken garden a circular flower-filled oasis with a stone walkway and low stone wall surrounding a three-tiered fountain as its focal point.

The original date of the sunken garden is unknown but it was restored in 2003 as a gift from the Cape Fear Garden Club.

From the back of the home past a white fence hugged by a large Lady Banks rose the enormous front porch welcomes guests with towering columns and a view of the front lawn. Its centerpiece is an awe-inspiring ancient live oak Spanish moss clinging to the branches that sweep up and over half of the front lawn. In its shade massive azaleas and Southern indica thrive.

A brick walkway leads to a wrought iron gate with the letter “W” inscribed in the center. A stroll through that gate and down the Market Street sidewalk to the gated entrance of the Kenan property drive emphasizes that historic family connection. There’s a “W” on that gate as well.