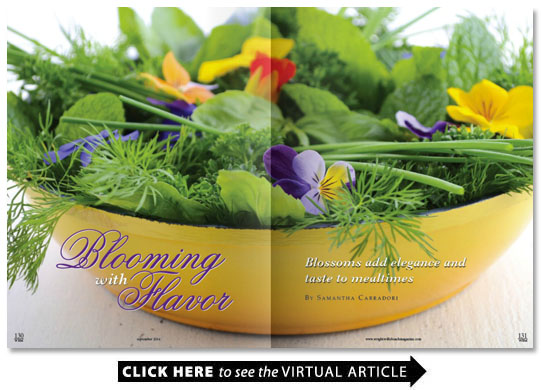 Beyond being simply beautiful flowers hold so many different cultural meanings. They serve as ways to communicate love friendship apologies congratulations and condolences.

Blooming buds play a role in everyday household life too. Some basic holistic healing remedies like essential oils and household items from cleaning to hair-care products are created from flowers or floral-derived ingredients.

A creative way to add floral tastes and aromas to food is through the use of flower waters created as the byproduct of distilling the blossoms. Some of the most popular are rose orange blossom and hibiscus. Kewra (an Indian plant) and elderflower water infuse an exotic taste that makes rare dishes such as Bengali vegetable pulao an exciting Indian specialty even more delicious.

Rose water dates back to the seventh century in Iran where it was distilled by boiling rose hips or the fruit of the rosebush. It predates the use of vanilla as the main ingredient for baked goods.

“Rose water orange blossom and elderflower extract are just some of the flower waters I use on a daily basis to create the perfect complement ” he says.

Wilmington’s Tandoori Bites restaurant offers Indian cuisine filled with flavor and history. One of its dishes gulab jamun is a sponge cake soaked in rose water syrup. Some grain dishes are cooked with rose water and make a flavorful vegetarian dish or side for a meat course.

Tucked within Wilmington’s downtown scene and nightlife is Gourmet Market a small convenience store. The line spilling out of the door at 11 p.m. might seem like customers purchasing sundries but it’s actually people lined up to sample homemade ice cream some of it enhanced with flower waters.

“The lavender ginger flavor is one of the most popular and gives that certain aromatic flavor ” says owner and operator Seyou Josep.

While flower water can add zest to food the blossoms themselves have long been at home on the dinner plate to add beauty and increasingly flavor to a meal.

“An edible flower is anything you can ingest that won’t poison you ” says Joe Choi co-owner of Wholesome Greens in Wilmington which provides flowers to many area restaurants. “They’ve been around a long time but it seems like they are being utilized more and more by younger creative chefs.”

Adventurous cooks who want to add flowers or flower water to their own dishes should keep in mind that not everything from the earth is good and natural. Spraying with pesticides and chemicals can make for toxic ingredients. Some flowers are poisonous and shouldn’t be eaten.

“It’s very important that it’s an edible flower and that it’s an organic flower ” says Tripp Engle chef at Brasserie du Soleil and Boca Bay. “You don’t want to be eating pesticides and chemicals. It’s important to know where it’s coming from.”

When edible and organic flowers and flower waters are healthy ingredients rich in antioxidants. Containing vitamins A C and E flowers can help reduce allergy attacks and settle an upset stomach. Blossoms of darker color tend to contain more antioxidants.

Flowers from vegetables are a good source of healthy flavor enhancement. Squash cucumber chive onion and garlic blossoms can be grown or purchased at health food stores or farmers markets and can be used in various ways. Placing chive blossoms in a quart jar and steeping them in the sun for a few days with vinegar and basil makes an aromatically delicious salad dressing.

The practice of cooking with flowers has been around for a long time.

“People have been eating and using flowers for hundreds of years if not thousands ” Engle says. “Native Americans definitely ate flowers. They ate flowers in Africa in South America Mexico pretty much all over the world. As soon as someone grows something to eat or forages through the jungle or the forest they are going to taste the flower. If it’s good they’re going to eat it.”

Margaret Shelton who operates Shelton Herb Farm in Brunswick County with her husband Chuck has been growing and selling edible flowers since 1986.

“We offer a selection of seasonal edible flowers year-round ” she says. “They are mostly for flavor and looks. They are colorful and happy.”

A neophyte might wonder whether it’s OK to eat the beautiful blossom on the plate. The answer is yes. The flowers are meant to tantalize the taste buds.

“People are a little apprehensive about eating a flower ” Engle says. “A lot of times they think it is just there to look pretty and it’ll get pushed aside. I don’t usually put flowers on a plate just for looks. When I use them I tend to scatter them throughout the dish so it presents itself to the guest that this is a part of the dish. It’s meant to be eaten.”

The art of cooking with flowers involves flavor just as much as it does aesthetics. Chefs will pick flowers that enhance the taste of the food.

“I might use fennel flowers on a dish that has a fennel or an anise component like a bouillabaisse ” Engle says. “I love using cilantro flowers when they are in season. The flavor is completely different than the leaves of the cilantro plant. Typically with the flower of any plant you get more of an intense flavor.”

Some flowers can be added to salads. Shelton recommends nasturtiums — tart but sweet she says. They also can be used to add flavor to dill dip.

Nasturtiums are also among Engle’s favorites.

“It’s got a nice spicy taste to it ” he says. “It’s a relative of the watercress family so it’s kind of spicy like watercress but a different flavor. And they’re very beautiful. Yellow bright orange red.”

Engle recently began using borage flowers after Choi introduced him to them.

“It’s very interesting because when you eat the flower upfront it tastes like melon and then the aftertaste is almost like a cucumber or West Coast oyster ” he says. “It’s a very interesting flower to use for seafood. Earlier this spring and early summer at the Brasserie we were putting them on our tuna dish which complemented it beautifully. They are very pretty too a lavender shade.”

Squash blossoms are widely used in Mexico cooked inside quesadillas with Oaxaca cheese. They are now becoming popular in the United States.

“At the Brasserie I’ve used them in a quiche ” Engle says. “They’re beautiful with eggs and the color shines through. At Boca Bay I’ve stuffed the squash blossoms with crabmeat and served it as an accompaniment to soft shell crab. That worked out really well.”

Whether experimenting with cooking with flowers for the first time or trying a local hotspot for dishes made with enticing blossoms the benefits are many. Flowers and flower water can help maintain a healthy lifestyle while adding excitement and zing to food.