BY By Pam Creech 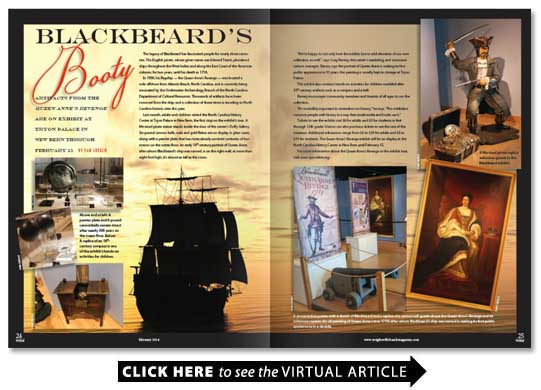 The legacy of Blackbeard has fascinated people for nearly three centuries. The English pirate whose given name was Edward Teach plundered ships throughout the West Indies and along the East Coast of the American colonies for two years until his death in 1718.

In 1996 his flagship the Queen Anne s Revenge was located a mile offshore from Atlantic Beach North Carolina and is currently being excavated by the Underwater Archaeology Branch of the North Carolina Department of Cultural Resources. Thousands of artifacts have been removed from the ship; and a collection of these items is traveling to North Carolina historic sites this year.

Last month adults and children visited the North Carolina History Center at Tryon Palace in New Bern the first stop on the exhibit s tour. A life-sized pirate statue stands inside the door of the center s Duffy Gallery. Six-pound cannon balls nails and gold flakes are on display in glass cases along with a pewter plate that has miraculously survived centuries of hurricanes on the ocean floor. An early 18th-century portrait of Queen Anne after whom Blackbeard s ship was named is on the right wall; at more than eight feet high it s almost as tall as the room.

Were happy to not only host the exhibit but to add elements of our own collection as well   says Craig Ramey the centers marketing and communications manager. Ramey says the portrait of Queen Anne is making its first public appearance in 10 years; the painting is usually kept in storage at Tryon Palace.

The exhibit also contains hands-on activities for children modeled after 18th-century artifacts such as a compass and a bell.

Ramey encourages community members and tourists of all ages to see the collection.

It s incredibly important to remember our history  he says. This exhibition connects people with history in a way that social media and books cant.

For more information about the Queen Annes Revenge or the exhibit tour visit www.qaronline.org