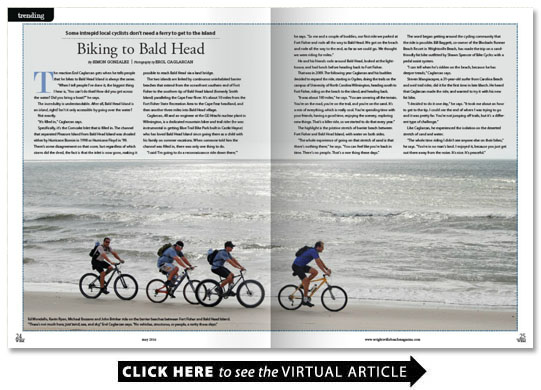 The reaction Erol Caglarcan gets when he tells people that he bikes to Bald Head Island is always the same.

“When I tell people I’ve done it the biggest thing I hear is ‘You can’t do that! How did you get across the water? Did you bring a boat?'” he says.

The incredulity is understandable. After all Bald Head Island is an island right? Isn’t it only accessible by going over the water?

Specifically it’s the Corncake Inlet that is filled in. The channel that separated Pleasure Island from Bald Head Island was shoaled either by Hurricane Bonnie in 1998 or Hurricane Floyd in ’99. There’s some disagreement on that score but regardless of which storm did the deed the fact is that the inlet is now gone making it possible to reach Bald Head via a land bridge.

The two islands are linked by continuous uninhabited barrier beaches that extend from the oceanfront southern end of Fort Fisher to the southern tip of Bald Head Island (formerly Smith Island) paralleling the Cape Fear River. It’s about 10 miles from the Fort Fisher State Recreation Area to the Cape Fear headland and then another three miles into Bald Head village.

Caglarcan 48 and an engineer at the GE Hitachi nuclear plant in Wilmington is a dedicated mountain biker and trail rider (he was instrumental in getting Blue Trail Bike Park built in Castle Hayne) who has loved Bald Head Island since going there as a child with his family on summer vacations. When someone told him the channel was filled in there was only one thing to do.

He and his friends rode around Bald Head looked at the lighthouse and had lunch before heading back to Fort Fisher.

That was in 2009. The following year Caglarcan and his buddies decided to expand the ride starting in Ogden doing the trails on the campus of University of North Carolina Wilmington heading south to Fort Fisher riding on the beach to the island and heading back.

“It was about 100 miles ” he says. “You are covering all the terrain. You’re on the road you’re on the trail and you’re on the sand. It’s a mix of everything which is really cool. You’re spending time with your friends having a good time enjoying the scenery exploring new things. That’s a killer ride so we started to do that every year.”

The highlight is the pristine stretch of barrier beach between Fort Fisher and Bald Head Island with water on both sides.

“The whole experience of going on that stretch of sand is that there’s nothing there ” he says. “You can feel like you’re back in time. There’s no people. That’s a rare thing these days.”

The word began getting around the cycling community that the ride is possible. Bill Baggett co-owner of the Blockade Runner Beach Resort in Wrightsville Beach has made the trip on a sand-friendly fat bike outfitted by Shawn Spencer of Bike Cycles with a pedal assist system.

“I can tell when he’s ridden on the beach because he has deeper treads ” Caglarcan says.

Steven Mangiacapre a 31-year-old surfer from Carolina Beach and avid trail rider did it for the first time in late March. He heard that Caglarcan made the ride and wanted to try it with his new fat bike.

“I decided to do it one day ” he says. “It took me about an hour to get to the tip. I could see the end of where I was trying to go and it was pretty far. You’re not jumping off trails but it’s a different type of challenge.”

Like Caglarcan he experienced the isolation on the deserted stretch of sand and water.

“The whole time riding I didn’t see anyone else on their bikes ” he says. “You’re in no man’s land. I enjoyed it because you just get out there away from the noise. It’s nice. It’s peaceful.”

Even though the land bridge is always there it is not always the right time to make the trek. The ride has to be done at low tide when the bikers can ride on the hard-packed sand. Otherwise the only option is the soft stuff that’s almost impossible to plow through.

“Every year I look at the tide schedule and see when low tide lines up from about 10 a.m. to noon ” Caglarcan says. “You definitely don’t want to be riding on that sand at high tide. If you make the mistake of going there when the tide is not right you’ll never make it. You’ll just get stuck in the sand. Even at low tide it’s bad sometimes.”

The right equipment also is essential. Mangiacapre and Baggett have fat bikes with wide tires ideal for riding on the sand. Caglarcan usually does it with a mountain bike but he puts beach cruiser tires on it.

Even with a bike and tires made for riding on the beach it’s not an easy ride.

“There’s a lot of soft deep sand ” Mangiacapre says. “I was spinning in a high gear to keep going to slowly move through it.”

Because of the need for the right equipment and the variables of tide wind sand and slope Caglarcan suggests that it isn’t a ride for beginners.

“You are going to burn a lot of calories ” he says. “It’s a lot of work. Some years it was ridiculous. I looked at my speedometer. It said 4 miles an hour barely faster than walking. You are going into the wind you’re on the slope with the tide coming in with soft sand sliding all over the place.”

The ride out must be timed for when the tide is going out and is usually the hardest part. That’s when the sand is the softest and the prevailing southerly winds add to the challenge. There have been years when Caglarcan and his buddies have been so tired by the first leg that they’ve been tempted to take the ferry from Bald Head to Southport and cycle home from there to avoid the beach. But they know the return leg is easier.

“When the tide is out you get a nice easy ride coming back when you’re tired ” he says. “With the tide out and the wind at your back you can go 30 miles an hour.”

One of the reasons Mangiacapre got his fat bike was to scout out locations for his other hobby.

“It’s kind of a cool way to find surf spots ” he says. “The sand bars move around a lot.”

Now that he knows about the Fort Fisher to Bald Head beaches he’s planning to attach a board to the bike and do some pioneer wave riding.

“I can catch some surf down there that’s hard to get to ” he says.

Caglarcan and his buddies won’t stop to surf but they’ll continue to make the ride for the experiences.

“It’s always something different ” he says.

On the stretch below the Fort Fisher Recreation Area they’ve seen a fisherman reel in a shark and rescued a man from a rip current. In no man’s land they’ll take a swim in the ocean just to cool off.

“One year a buddy got stung by a jellyfish ” Caglarcan says.

They occasionally see somebody famous like the year when they met a former NFL coach.

“One year we ran into Bill Cowher on Bald Head ” Caglarcan says with a laugh. “He wasn’t really interested in us.”

But the most fun part might be chatting with people at Bald Head and telling them how they got there.

“We’ll talk to people on the island and they are very surprised to hear that we’ve ridden there from New Hanover County ” he says.