Big Rock is a Big Deal 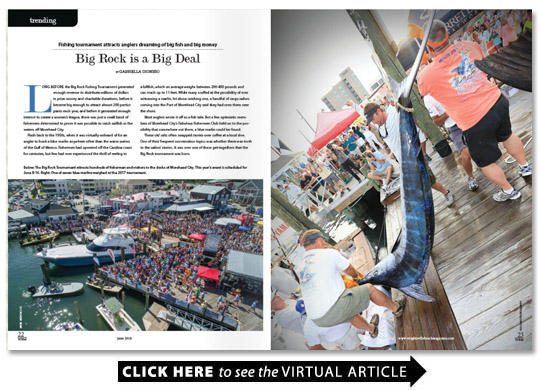 Long before the Big Rock Fishing Tournament generated enough revenue to distribute millions of dollars in prize money and charitable donations before it became big enough to attract almost 200 participants each year and before it generated enough interest to create a women’s league there was just a small band of fishermen determined to prove it was possible to catch sailfish in the waters off Morehead City.

Flash back to the 1950s when it was virtually unheard of for an angler to hook a blue marlin anywhere other than the warm waters of the Gulf of Mexico. Fishermen had operated off the Carolina coast for centuries but few had ever experienced the thrill of reeling in a billfish which on average weighs between 200-400 pounds and can reach up to 11 feet. While many scoffed at the possibility of ever witnessing a marlin let alone catching one a handful of cargo sailors coming into the Port of Morehead City said they had seen them near the shore.

Most anglers wrote it off as a fish tale. But a few optimistic members of Morehead City’s Fabulous Fishermen Club held on to the possibility that somewhere out there a blue marlin could be found.

These old salts often swapped stories over coffee at a local dive. One of their frequent conversation topics was whether there was truth to the sailors’ stories. It was over one of these get-togethers that the Big Rock tournament was born.

In 1957 four of the Famous Fishermen solicited donations from local businesses hoping the lure of a cash prize would entice fishermen to venture offshore in search of the elusive blue marlins. Sure enough the prize money got fishermen’s props turning.

They spotted blue marlins throughout the summer but didn’t hook one until Sept. 14 when K.W. “Bill” Olsen reeled in a 143.5-pounder. Olsen informed the port of the catch. Word spread so quickly that when he brought the Mary Z back to Morehead City he was met with cheering townspeople police sirens and a spur-of-the moment parade. Olsen was awarded 250 silver dollars.

As the Big Rock celebrates its 60th year the prize money for the largest blue marlin is about $500 000. To commemorate the anniversary six Rolex Submariner watches with the 60th Big Rock logo engraved on the back will be awarded.

Crystal Hesmer the tournament director for the past 20 years says the growth and success of the competition is all in the history.

“The tournament was created by people who had a love for fishing ” she says. “Each year it grows and the main reason it’s been such a success is because the interest from the community is there and we were determined to press forward and make it better each year.”

The first decades laid the groundwork for what is now considered the premier fishing tournament on the East Coast for blue marlins attracting fishermen from Florida to New York including many from the Cape Fear region who pay as much as $5 000 to enter in hopes of landing the big prize.

Wrightsville resident Brian Dressler his father uncle and cousin have competed the past three years and plan to put lines in as this year’s event starts on June 8.

“My family has never been disappointed with the tournament ” Dressler says. It’s a good family-friendly event with an awesome atmosphere.”

Just as it was in 1957 the money continues to be a big lure. But Wilmington native Kit Taylor who first fished in the Big Rock in the 1970s and has placed in the top three says the success of the tournament goes beyond the payouts.

“The tournament has a combination of everything ” Taylor says. “The events are good the fish are plentiful and the accommodations are great.”

The rewards and amenities are nice but at the end of the day these fishermen are out there for one reason: to catch the big one.

“The bite is what we go for ” Taylor says. “To get a fish on the teaser switch him off to the bait and hook him? It’s the biggest thrill in the world.”

After each tournament the Big Rock board of directors works to revise and critique the rules and operation.

“There are a few changes we’re making this year ” Hesmer says.

One change is to encourage more catch-and-release part of an ongoing emphasis on conservation-based fishing.

The top cash prize annually goes to the winner of level five the Fabulous Fishing Level. It’s awarded to the fisherman who reels in the biggest blue marlin provided the fish weighs at least 500 pounds. In the past if a fish of this size wasn’t caught no prize money was distributed. This year that money will go to the boat entered in the category with the most release points.

The tournament is also known for its generous charitable contributions. Over the years it has donated more than $4.9 million to charities and organizations across the state.

“Within the last 25 years the tournament has solely existed to give the profits back to the charities and schools ” Hesmer says. “Not only does the event draw tourists in and create positive attention for the town but it immensely helps the community.”

With charity being at the forefront of the tournament’s mission statement it is not surprising that one section of the tournament was created solely to give back. The Keli Wagner Lady Angler (KWLA) tournament primarily exists to provide funds to Carteret Health Care Cancer Center.

In its 21st year the KWLA honors Keli Wagner the wife of a board member who was a patient at the Carteret Health Care Cancer Center and played an instrumental role in forming the partnership between the two organizations. Wagner died from cancer in 2008.

“Keli would have her treatment here and would see all of the things the hospital needed but didn’t have the money to provide its patients with ” says Susan Collins foundation director for the cancer center.

The tournament has donated nearly $300 000 to the cancer center in the past nine years. Since the partnership began the center has used the money for art therapy computer tablets and robes designed to help make the patients feel beautiful.

“The money donated has been invaluable to our patients at the cancer center ” Collins says. “It has paid for comfort and care items that go beyond the scope of what the hospital can provide.”

On Friday June 8 the Lady Angler Reception will serve as the official kick-off for the 60th annual Big Rock Blue Marlin Fishing Tournament.

Simpson a Morehead City native and one of the founders of the Big Rock Tournament died on March 28 2018. Simpson was an original member of the Fabulous Fishermen Club and was inducted into the Order of the Long Leaf Pine North Carolina’s highest Civilian honor in 2006. He was the longtime owner of the Sylvia II the oldest commercial and charter fishing boat left in North Carolina now being restored in Wilmington (see “Floating Masterpieces ” September 2016 WBM).