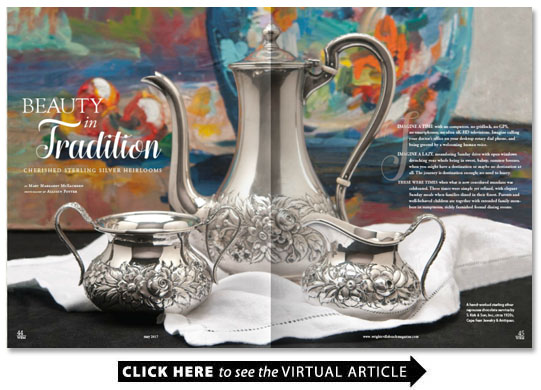 Imagine a time with no computers no gridlock no GPS no smartphones no ultra 4K-HD televisions. Imagine calling your doctor’s office on your desktop rotary dial phone and being greeted by a welcoming human voice.

Imagine a lazy meandering Sunday drive with open windows drenching your whole being in sweet balmy summer breezes when you might have a destination or maybe no destination at all. The journey is destination enough; no need to hurry.

These were times when what is now considered mundane was celebrated. These times were simple yet refined with elegant Sunday meals when families dined in their finest. Parents and well-behaved children ate together with extended family members in sumptuous richly furnished formal dining rooms.

On special occasions — or for some families every week — tables were bathed with the soft light of candles set in sterling silver candlesticks. Meals consisted of several courses beautifully arranged on fine bone china placed on fine linen mats and framed properly with the family’s finest sterling.

The silver service often included the salad fork to the far left with the dinner fork immediately to the right next to the plate. On the right side of the plate the knife would come first with the blade always facing inward toward the plate with a spoon to the immediate right. If an appetizer was served the appropriate utensil was placed between the primary utensils of similar type. Place setting customs did vary slightly according to norms for the area.

Dessert was always served; no one worried about carbs back then. Sterling silver dessert utensils would be placed above the plate facing left and flipped face down. Coffee was served from a beautiful silver urn. If champagne or wine was served the bottle would be in a sterling silver ice bucket. Manners were impeccable. These families did not merely eat; they dined. There was beauty in the simplicity.

In today’s modern fast-paced world often-overcommitted families are hard-pressed to eke out even one daily meal together. The Sunday dinner with all the finery seems like it belongs to a bygone age.

Skipper observes a greater demand for complete sterling service sets in the metros of Raleigh Greensboro and Charlotte where he often attends trunk shows featuring the items. Wilmington’s “more casual atmosphere” coincides with a lower demand locally he says.

There are however people who keep the cherished custom alive.

“I’ve been using and entertaining with my mother’s-side family silver for years — four generations’ worth plus new additions ” says retired wine critic Michael Parker formerly of Wilmington and now living in Asheville. “Silver was a thing for my English Parker [ancestors for centuries].”

Mary Susan Lucas also carries on a tradition passed down from a family member.

“My great-grandmother had one place setting of a different pattern from the rest so that only she could eat using it and no one else could ” she says. “As her namesake I have her one setting plus several from the other pattern.”

There was a time when silver service was a staple of bridal registries. It’s been replaced these days with more practical items. Thus it seems that much of the silver still around is passed down as an heirloom.

Cindy Morrison of Wilmington remembers with fondness the heirlooms her husband Tom and his sister Winifred inherited from Tom’s parents longtime Wilmingtonians Benjamin Robert “Teesie” Morrison and Patricia Poplin Morrison. These include flatware and specialty items including infant gifts. These ancestral heirlooms much like cherished family photographs evoke emotions and colorful anecdotes.

“I used to buy my mother sterling silver bell ornaments every year at Christmas ” Wilmington native Charla Ellington states. “They played a different song each year. I don’t know why I quit buying them!”

The yearly gifting of sterling silver bells and similar Christmas ornaments once was commonplace; they made wonderful keepsake gifts. Sterling silver heirlooms often come with amusing stories like the one behind Wilmington resident Freddi Hatcher’s silver candlesticks.

“My dad wanted to buy my grandmother (his mother-in-law) a live parakeet ” recalls Hatcher a retired dental hygienist.

The store clerk suggested the silver candlesticks as a safer bet. Hatcher explains that many retailers during that time carried oddly both parakeets and sterling silver articles. Apparently unbeknownst to her father her grandmother actually had her heart set on a parakeet and from that day forward they were known as the “bird candlesticks.”

Today rather than taking pride of place silver service and keepsakes often are demoted from a symbol of refinement to that quirky item that receives little attention but somehow can’t be relinquished. It requires a level of care — polishing — that is foreign in modern times.

“As a child I had to polish the family silver every weekend ” Annette Aronson a massage therapist from Wilmington remembers not so fondly. “It’s how I first learned to use [certain words]! For my 18th birthday my mother presented me with some of the family silver but I refused to take it.”

Cousin Anne Russell reports that since she has inherited the family silver she has tried to pass it on to her four daughters none of whom want to use it due to constantly having to keep it polished.

I can relate. My parents loved to entertain and used their sterling silver flatware for their dinner parties. We eventually sold many of these pieces because the thought of polishing and hand washing them made us cringe. I have come to regret that decision.

Despite its decline in use silver remains popular with those who relish the elegance that only it can offer and there are tricks of the trade to minimize tarnishing.

“Use your silver often!” implores Ricky Lewis jeweler and silver expert with Albert F. Rhodes in Wilmington. “Simply using and washing it with dish detergent will keep tarnish from forming. If you don’t use your silver often enough to wash it every month then keep it stored in cellophane.”

Skipper echoes this sentiment relating that many of his clients use their sterling daily in lieu of stainless and other options. There are also those who cherish that one special item.

“My favorite pieces of sterling are beautiful ice cream spoons. I use them just enough to not have to polish them ” says Sally Meserole a retired teacher from Wilmington.

Sterling silver exudes a timeless elegance that can be matched by no substitute. It preserves treasured family memories gives life to history and serves to remind us of what in many ways was a more civilized time.

My husband and I have a personal silver collection that includes historically significant and interesting pieces from my father’s side of the family through several generations of direct and indirect ancestors. It includes sterling silver goblets bowls and plates my father Sandy won sailing in races at the Carolina Yacht Club.

Perhaps the most intriguing piece is the Lillington silver salver which originally belonged to my great-great-great-great-great grandfather Gen. Alexander Lillington of Revolutionary War fame who died in 1786. Gen. Lillington was best known for leading the Wilmington militia in the 1776 victory in the Battle of Moore’s Creek Bridge in Pender County.

A salver is a small footed tray usually made of silver or another metal used for transporting small service pieces or food samples. It is believed that these trays were employed by nobility as food testers; they would have their servants taste small samples as insurance against poisoning.

Virginia N. Jennewein appraised the Lillington salver around 1985 citing that it was made by silversmith William Peaston of London England circa 1755. The hallmarks — official stamps seen on English sterling proving genuineness — include the crowned leopard which is the “city mark” signifying the piece was made in London; the date letter for the year 1755; the lion passant proving certification in London by an official British assaying office; and the maker’s initials in the heart otherwise known as the maker’s mark.

The salver once belonged to my paternal grandmother Margaret Jewett McEachern who bequeathed it to my father. Margaret served as executive secretary of the North Carolina Society of Colonial Dames managing its headquarters at the Burgwin-Wright House until her retirement at age 91.

I recall as clearly as though she said it yesterday when she exclaimed to me “I may not be able to leave you much in the way of money but I shall leave you a heritage!” That salver has blessed me with many wonderful memories of my grandmother.