Beauty in the Mundane

People, places and pastels: life in chalk with Jeri Greenberg 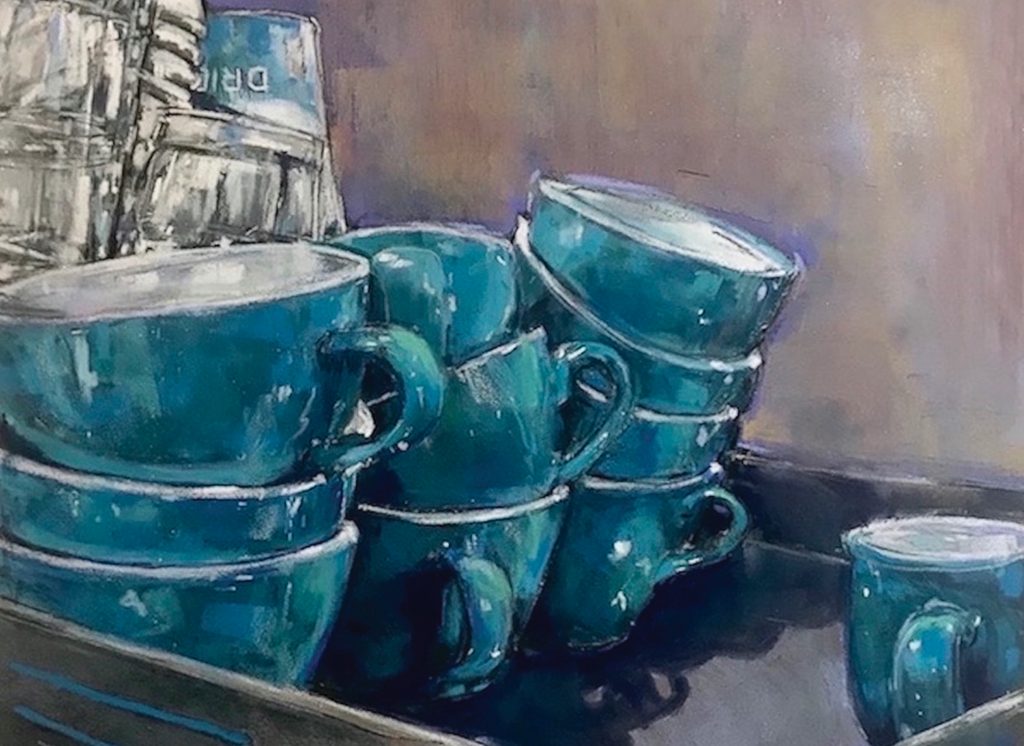 The pure pigments that burst out of every corner of a Jeri Greenberg painting tell the story of a master immersed in her craft. The eyes and faces of her figures are arresting, the composition of each piece pulls the viewer deeper into its world, and even a crumpled sheet or teacup has a story to tell.

While the colors of each pastel painting are extraordinary, the subjects are not. Quite the opposite, in fact. Greenberg’s body of work includes a collection of people in the quiet, mundane moments of everyday life. There’s also a series of empty beds, a bike leaning on a park bench, and fruits, flowers and teacups.

But it is in the beauty of the mundane that Greenberg finds the stories she wants to tell.

“The ordinary can be extraordinary if you’re paying attention,” she says.

Greenberg’s immersion into fine art is part of the “next act” in her life. She wasn’t always a professional painter and teacher. Before entering the art world, she had a long career working in illustration, fashion, graphic design, and advertising.

“I have been drawing for all of my life,” she says. “I can’t remember a time when I wasn’t drawing. Doodling is how I calm myself down.”

While in school she discovered the large divide between the world of an “illustrator” and that of a “painter.” She was under pressure to define herself.

“When I was going to school, I was told to pigeonhole myself,” she says. “I always considered myself an illustrator until I learned to consider color and form and composition.”

Always the go-getter, Greenberg took her portfolio through the subways of New York, knocking on office door after office door until she won her dream job as an illustrator. She then reinvented herself time and time again. As the industry changed, so did she.

She did it while raising children but, as the kids began leaving the house, a few mentors urged Greenberg to take the leap into the art world.

“It was time to do this for myself,” she says.

She thought she was ready for the next act in her life, but the anxiety of putting herself out there to be judged and scorned by artists and critics became a huge obstacle.

“I was really shy as a youngster and lived most of my life with a lot of social anxiety,” she says. “I was someone who had very little self-esteem, as is the case with many artists. And when you enter your art in a competition, you’re taking your baby and you’re asking people to judge you on it. I guess I had to get tougher skin and learn to like myself.”

As Greenberg continued to practice and master her craft, she found herself getting braver. She determined she had a heavy hand with oil paintings and the medium didn’t do what she wanted it to. Then she discovered pastels, and the grand ideological divide between “painter” and “illustrator” came crashing down.

Her many years of illustration became a foundation. She perfected a method of illustrating the pieces first and adding color later. Today, students who come to Greenberg’s class to learn pastels finish the course with a strong knowledge of illustration as the basis of their piece.

As her craft improved, so did her self-confidence.

“Now, if I get rejected it’s not the end of the world,” she says. “I tell myself, ‘Well, you had your turn last year, this year it’s someone else’s turn.’ Now I’m painting for myself. The funny thing is, when I paint for myself I feel happier, my work feels happier, and it tends to get accepted into more competitions.”

Greenberg now not only wins competitions but is invited to judge them.

“It’s interesting being on the other end of it now,” she says, “being a juror for competitions and exhibitions where there are 500 entries and I can only take 100.”

Greenberg spent years sketching women while working in fashion. Most of her subjects still are women, but one of her most recent pieces is distinctly masculine.

The painting “Blue-Eyed Hero” is based on a photograph her son sent while he was working on the USNS Mercy, the Navy hospital ship deployed to Los Angeles to provide relief to overcrowded hospitals during the onset of the coronavirus pandemic.

His tired eyes match the N95 mask he had to wear on duty – and could not take off during his 48-hour shift.

“It breaks my heart to think about,” she says. “He looks so exhausted.”

Many of her pieces have personal stories attached to them. They might not always be obvious to the viewer, but the story is still there visually for observers to interpret in whatever way they need to.

This is most obvious in her award-winning painting of aqua coffee cups, “Don’t Let the Blues Get to You.” There’s not much in the frame other than cups heating on an espresso machine, but the way the light catches the somber blue says so much more.

If Greenberg could go back in time and talk to the young, self-conscious version of herself, she would have this to say: “You have this really special God-given gift. You are so special. Don’t listen to the high school mean girls, because they’re gonna be 60 and fat, and you will still be painting.”

Greenberg and her husband moved from New England to North Carolina where she has found a welcoming art culture and a community of pastel painters. When she is not painting in her studio she might be teaching at the Cameron Art Museum, or more recently teaching via video conference.