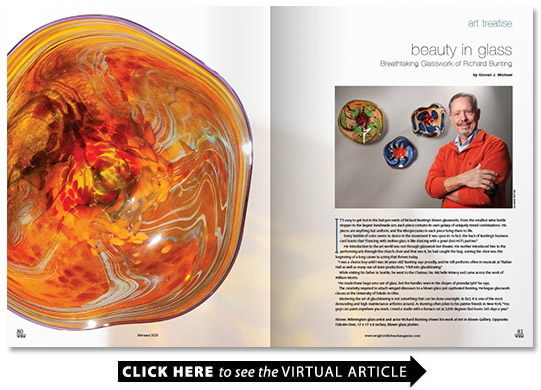 It’s easy to get lost in the halcyon swirls of Richard Bunting’s blown glassworks. From the smallest wine bottle stopper to the largest handmade urn each piece contains its own galaxy of uniquely tinted combinations. His pieces are anything but uniform and the idiosyncrasies in each piece bring them to life.

Every bubble of color seems to dance in the movement it was spun in. In fact the back of Bunting’s business card boasts that “Dancing with molten glass is like dancing with a great (but HOT) partner.”

His introduction to the art world was not through glasswork but theater. His mother introduced him to the performing arts through the church choir and that was it he had caught the bug. Joining the choir was the beginning of a long career in acting that thrives today.

“I was a chorus boy until I was 36 years old ” Bunting says proudly and he still performs often in musicals at Thalian Hall as well as many out-of-state productions.”I fell into glassblowing.”

While visiting his father in Seattle he went to the Chateau Ste.Michelle Winery and came across the work of William Morris.

“He made these huge urns out of glass but the handles were in the shapes of pterodactyls!”he says.

The creativity required to attach winged dinosaurs to a blown glass pot captivated Bunting. He began glasswork classes at the University of Toledo in Ohio.

Mastering the art of glassblowing is not something that can be done overnight. In fact it is one of the most demanding and high maintenance artforms around. As Bunting often jokes to his painter friends in New York “You guys can paint anywhere you want. I need a studio with a furnace set at 3 000 degrees that burns 365 days a year.”

That is not an exaggeration. Furnaces at most studios are never turned off and if one is it usually stays off for an entire season. It takes two weeks for a furnace to get back up to temperature and that’s only if nothing goes wrong.

The result? Owning a studio is expensive. Very expensive. So Bunting rents studio time depending on where he finds himself from Foci Studios in Minneapolis to Star Glassworks in Star North Carolina. This seems to fit the gypsy soul of the frequent traveler. It also keeps him connected to the large community of glass artists one he says is very supportive.

“Sometimes I would just come and watch her work so I could learn ” he says.

This is something he is incredibly grateful for especially because glassblowing has its roots in secrecy.

“Glassblowing goes back into the B.C. era and was discovered accidentally through volcanic eruptions. During the Renaissance glassblowing was centered in Murano Italy and the Italians were very secretive. They didn’t want anybody to know how they did it ” he says.

Bunting has accumulated a wealth of knowledge on the subject and the passion he holds for the art form is reflected in the vibrancy of his pieces.

“The best part about the art form for me ” he says “is that you can’t put it down. I have projects that are 20 or 30 years in the making. But when it comes to glass when you start it you have to finish it or it ends up on the floor.”

Working with glass is certainly a challenge but Bunting says he loves that challenge.

“The first thing you learn to make is usually a paperweight or a small round object ” he says. “But it’s such a long learning curve it usually takes at least a year. Glassblowing is all about heat gravity and centrifugal force. It takes a long time to learn and you never stop learning.”

Bunting says if he ever won the lottery he would open a studio of his own. It would be great to help guide people through the learning curve.

His career as a performer and his career as a glassblower are not separate but two parts of a long beautiful and winding path as an artist.

“As a singer actor dancer and director for the last four decades glass blowing fits as a theatrical experience ” he says.