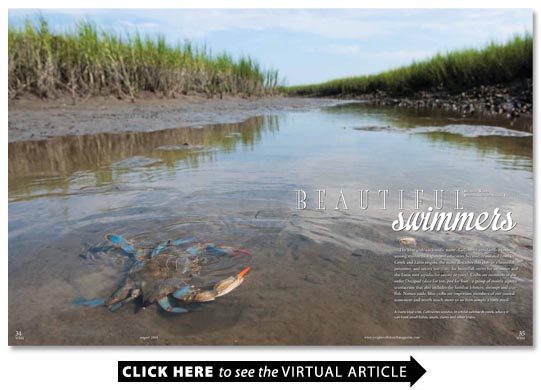 The blue crab s scientific name Callinectes sapidus is a favorite among marine biologists and educators because translated from its Greek and Latin origins the name describes this crab as a beautiful swimmer and savory too (Calli for beautiful nectes for swimmer and the Latin root sapidus for savory or tasty). Crabs are members of the order Decapod (deca for ten pod for foot) a group of mostly aquatic crustaceans that also includes the familiar lobsters shrimps and crayfish. Names aside blue crabs are important members of our coastal ecosystem and worth much more to us than simply a tasty meal.

As a predator blue crabs are fierce hunters of marine worms snails small fishes other crabs and just about anything small enough for them to subdue with their powerful claws; the blue crab s business ends when it comes to interacting with others including prey enemies and careless fingers or hapless toes.

As scavengers blue crabs prowl marshes and other inshore waters in search of  dead fish resting on the seafloor or a piece of chicken neck tied to a crabber s string. Blue crabs as with many animals are opportunistic feeders; they will catch and eat anything that offers nourishment from marine algae to animal tissue fresh or rank.

Looking across a saltmarsh creek one may see a frenzied school of small fish break the water s surface in a panicky attempt to evade an unseen threat from below. While it s easy to fantasize thata big drum or flounder is flushing the frenzied schools of silversides mullet or menhaden the more likely culprit spooking the fish is a different beautiful swimmer  — the blue crab.

Blue crabs will often hide in loose sand or mud just deep enough to conceal their outline but shallow enough to strike at passing prey using their bigger clutching claws to subdue a meal. Nothing within reach is safe from a crab especially anything smaller than the crab itself including charming little fiddler crabs in marshes and other tidal areas.

A quick look at the blue crab will reveal its specialized legs; the front-most pair adapted for food gathering with each of these legs tipped with a pinching claw called a pincer or chela. Behind this front pair are three pairs of point-tipped walking legs and the rearmost legs end with a flatted swimming paddle indicative that the blue crab is a member of the swimming-crab family.

Looking at its underside one can see its flattened tail or telson tucked tightly to its abdomen. The male s telson is narrow whereas the female s is triangular when immature eventually becoming semi-circular. The female telson serves as an apron for the mature blue crab to carry her ripening eggs  — upwards of one to two million per crab. Crab larvae hatched from these eggs are called zoea each smaller than a grain of sand and sporting sharp spines that can prick tender skin when the tiny creatures get caught inside a bathing suit.

Close observation of a blue crab s pair of claws will reveal one larger than the other; the larger one employed as a nutcracker to crush prey while the smaller one is used as a delicate meat pick. Strong muscles attached to the crab s shell interior power the moveable pinching part the dactylus or finger. The shell is composed mostly of chitin a cellulose-like material strengthened with calcium to form a hard protective covering.

Insects spiders crabs and other arthropods (arthro for jointed) must periodically molt their outer hard skeletons to grow  — like replacing small shoes to accommodate growing feet. For a period of hours to days after the molt crabs are soft-shelled defenseless and focused on staying out of sight of predators.

Visiting a saltmarsh habitat during any warm month will likely include seeing a group or cast of fiddler crabs scurrying from one s approach. If herded into the water it is quite likely some will end up being grabbed by a blue crab lurking in the shallows.

Our two most common species of fiddler the sand fiddler Uca pugilator and the mud fiddler Uca pugnax are so-named because the male crab sports one very large claw and one small claw reminiscent of a fiddle player. Female fiddler crabs bear two small claws of equal size giving her a two-fisted feeding advantage over the awkwardly equipped males. The male fiddler s large claw is waved about to intimidate other males or to attract the attention of an egg-laden female. On occasion one may see a large male fiddler grappling mightily with a smaller male though rarely does their altercation come to real blows.

As their common names imply the tan and lavender-colored sand fiddler is mostly found in and around the sandy backsides of barrier islands where dunes fan into tidal marsh. Mud fiddlers are brown and burgundy colored which helps them blend with the muddy banks of tidal creeks and adjacent cordgrass marshes.

Watching a fiddler feeding on a mudflat one can observe it gather a fistful of sand into its mouth along with bits of detritus microscopic plants or diatoms and other organic matter accumulated as a thin film on marsh surfaces. Once in its mouth the crab rinses good stuff from indigestible minerals before spitting out a BB-sized pellet of clean sand thousands of which can be seen scattered over exposed low tide mud and sand flats.

The fiddler s feeding pellets may be found among marble-sized dollops of sand and mud  — creations made by fiddler crabs that excavated a burrow in the mud the crab s shelter during high tide when flooding seawater draws a host of fiddler predators including various fishes wading birds terrapins and blue crabs.

Crabs require very specific living conditions to thrive. Placing a recently captured crab in a bucket of warm water will likely spell doom for the animal if not released quickly. Observing crabs in a bucket is fine as long as the animal is not exposed for too long. Due to the fact that crabs breathe oxygen from water they can drown from lack of oxygen in dirty or warm water. Strange as it may sound it s best to just barely cover a crab with water so that it can mix air with water as it breathes. To reduce its stress be sure to safely release the crab where it was found.