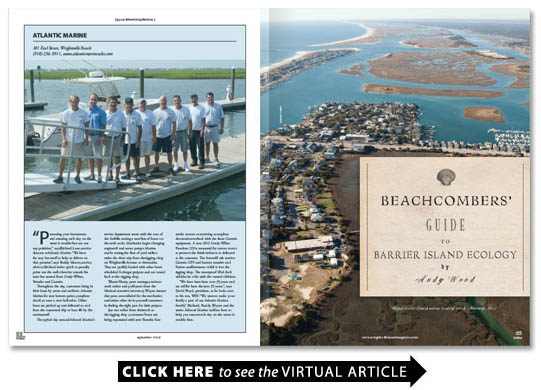 By eashore life offers endless opportunity for discovery especially to those curious enough to observe the happenings on and around a barrier island beach that provides wondrous places for discovery whether its a wrack line where the strongest waves deposit shells seaweed and driftwood high up the beach or the shallow pools that form in the sand between high and low tide lines.

This is the place of dunes and swales where sea breezes sweep beach sand into neatly mounded rows that run the length of the island.

The dunes are grown-over with tall sea oats a grass adapted to the rigors of life in heat and sunshine made more difficult by salty spray carried off the ocean sometimes by fierce winds. Sea oats grow through constantly shifting sand from tough underground rhizomes held in place by dense mats of fibrous roots reaching deep into the sand in search of moisture. Sea oat leaves and flower stalks trap wind-blown sand grains causing the dunes to grow ever taller.

Between the dunes are low areas called swales. Swale habitats are relatively sheltered places that support a greater variety of plant life including the yucca and cactus along with salt-sculpted yaupon and cedar all woven together by dense tangles of thorny greenbrier vines. These vegetated patches are edged by a collection of wildflowers including Indian blanket also called gaillardia along with silverleaf croton which really has silvery-green leaves and in autumn clumps of tall goldenrod plants with bright yellow flowers that are a favorite source of nectar for butterflies and other insects.

Once through the dunes and swales the sound of wind and waves guide the beachgoer to the most dynamic habitat on the coast the open beach but not before crossing the high tide wrack line where the strongest waves deposit whatever the sea brings to shore including marine algae driftwood and seashells. Poking about in this material will often reveal little crescent-shaped animals the size of rice grains called amphipods. These relatives of shrimp hide under seaweed and other sheltering objects and hop about when disturbed earning them the common name sand hopper or beach flea. They are harmless and difficult to catch.

Flies and other insects may also hide in the wrack line. Some are food for the tiger beetle seen running and flying up and down the beach. The tiger beetle is so-named because it is a fierce predator of other insects. Tiger beetles chase down and eat biting flies that bother beachgoers especially when winds blow from the west.

Wrack lines are fun to explore but to complete your barrier island journey youll need to visit the surf zone where ocean waves break into foamy tumults that stir up sand push shells around and send countless little animals into frenzied motion. In this narrow zone where ocean water sweeps up and down with each passing wave youll see small fish darting to and fro staying with the water as it recedes back to the sea. Some may be young fish that once large enough will move offshore to live as much larger adults; pompano permit and flounder are among the commonest in this group.

Another group of fish that spends an entire lifetime in and around nearshore waters is the striped killifish especially adapted to the turmoil of swirling ocean beach waves. Killifish are tough little animals. Not only does this fish need to keep track of where the waves are taking it up the beach it must be prepared to flee from surf-zone predators including bluefish flounder and a freckled cousin of the blue crab called the speckled crab.

In addition to avoiding predators killifish sometimes have to cope with being stranded on sand if they miscalculate a wave. As with all fish killifish get their oxygen from water but they are able to survive short periods exposed to air as long as its not too hot. In shallow water you can try to catch one with your hands but be prepared to be outsmarted. When a killifish perceives grave danger from predators including human hands it will burrow into the sand. A sharp eye can locate where it is hiding but this plucky little animal is prepared to squirm away from whatever tries to catch it.

The name killifish is derived from a Dutch word for shallow water or stream and it is not surprising that this finger-sized fish is also very common in the tidal creeks behind Wrightsville Beach. There they ply the waters edge in search of tiny crustaceans including copepods and amphipods along with insect larvae especially mosquito larvae. As previously noted killifish are in turn eaten by larger predators in the marsh waters including flounder and blue crabs. Because killifish are at home in shallow water they are commonly seen swimming amid patches of cordgrass during a flood high tide.

Out on the beach killifish and other small surf-zone fish are hunting little animals living amid the sand grains including tiny worms and the larvae of crabs and shrimp. Just as soil in a forest or yard is home to many millions of creatures too small to see without a magnifying glass so too does sand at the beach support a diverse community of miniscule plants and animals all making their living under bare feet and beach towels. Most of the animals are in damp sand where ocean water provides them with oxygen and keeps them cool. Most go unnoticed by humans but not by killifish and other eaters of tiny things.

The surf zone is also populated by groups of sand-colored egg-shaped mole crabs another crustacean and a cousin of the amphipod kin to shrimp and lobsters. If you catch one up in your hands you will feel it push backward trying to dig between your fingers just as it would do in sand. Mole crabs are equipped with scurrying little legs and a pair of feathery antennae that sweep water for microscopic plants known as diatoms. When waves recede mole crabs burrow in loose sand to hold them in place while feeding and also to hide from predators including fish and birds.

A small mollusk a member of a group of animals that includes clams snails and squid is the fleet-footed coquina clam. It uses its rubbery foot to pull itself into loose sand to stay in place and to escape predators and extends its long hose-like siphon used to vacuum up diatoms and other tiny bits of organic matter on the sand surface.

While you are at the beach you may see flocks of small birds running up and down the beach as if they are chasing waves. These are shorebirds and what they are doing is chasing amphipods mole crabs and other small creatures to eat. Shorebirds including plovers sandpipers and their larger cousin the willet work the surf zone because that is their restaurant and while these birds may be small they have a big appetite because they are always on the go. They spend much of the year migrating from wintering grounds as far away as South America to summer breeding grounds in northern Canada and back again. Like a highway rest area for people the beach is a rest area for birds to find food and catch some sleep before resuming their travels. For this reason it is best to watch the birds from a distance as they work or rest and never chase or frighten them.

Standing in the surf zone of a barrier island beachgoers can see energy flowing all around: Waves breaking on the shore have their origin in winds blowing over the sea surface; bluefish swimming under those waves are energized by a diet of smaller fish that in turn are powered by the rich collection of tiny creatures dwelling amid sand and surf swirling around our feet.

While I borrowed kitchen items as a kid to aid my exploration of watery environs it is easy enough today to acquire small nets and buckets to help with finding interesting things to look at.

The beach is a wonderful classroom with many plants to observe in the dunes and swales and many small creatures to find in wrack lines and surf zones. A curious observer will learn the best tides for beach exploring depending on what you are looking for and a caring observer will be sure to release whatever live things are found back in the place where living things belong.

North Carolina is home to some 325 miles of coastal shoreline where land meets sea. Much of it is in the form of sandy barrier islands.

Barrier islands are geologically young coastal features because the shoreline has gradually moved inland since the end of the last ice age some 18 000 years ago. The melting of mile-thick ice that covered much of the northern hemisphere has raised the worlds oceans ever since. Nowhere is this dynamic process more evident than the interface between land and sea we call a barrier island.

Getting to Wrightsville Beach involves traveling east over the Intracoastal Waterway a boating highway constructed in the early 1900s. From the waterway youll cross Harbor Island just landward of the Wrightsville Beach strand. Growing atop the high ground of Harbor Island and in places along Wrightsville Beach are patches of evergreen shrub forest containing a mix of trees including live oak red cedar yaupon holly wax myrtle and even some dogwoods and loblolly pines many of them naturally manicured by salt spray that burns back new leaves and twig tips.

Surrounding Harbor Island and the west side of the beach strand are vast areas of grassy salt marsh broken by a network of meandering tidal creeks that flush the marsh with salty ocean water twice each day. The salt marsh is one of earths most productive ecosystems. Its cordgrass plays a key role as a source of energy for feeding a great number of animals while also serving as a shelter for fish crabs and a charming coastal turtle the diamondback terrapin.

Coastal fringe forests and tidal marshes are tempting distractions but the allure of sand and waves is difficult to overcome. Beachgoers must still venture through a sandy realm not too unlike a desert where spiky yucca plants grow alongside spine-studded prickly pear cactus.

Communities of barrier island plants and animals are part of ever-changing ecosystems that include grassy marsh and tidal creeks sandy dunes and shrubby swales and of course the open beach. North Carolina will always have barrier islands because they are the interface between land and sea; they just wont always be where we expect them because this is a shifting realm where wind and storm conspire with a rising sea to move heaven and earth.