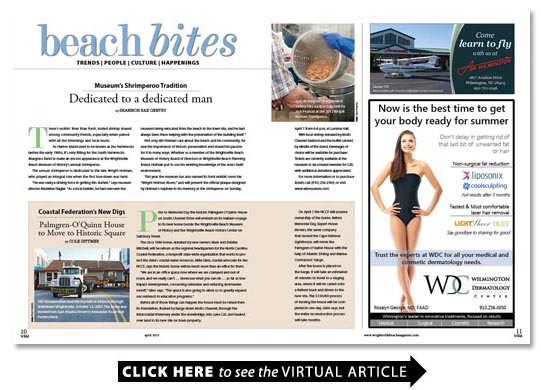 Dedicated to a dedicated man

Theres nothin finer than fresh boiled shrimp shared among community friends especially when paired with all the trimmings and local music.
As Harbor Island used to be known as the Hammocks before the early 1900s its only fitting for the South Hammocks Bluegrass Band to make an encore appearance at the Wrightsville Beach Museum of Historys annual Shrimperoo.
The annual shrimperoo is dedicated to the late Wright Holman who played an integral role when the first hoe-down was held.
He was really a driving force in getting this started says museum director Madeline Flagler. As a local builder he had overseen the museum being relocated from the beach to the town site and he had always been there helping with the preservation of the building itself.
Not only did Holman care about the beach and his community he saw the importance of historic preservation and shared his passion for it in many ways. Whether as a member of the Wrightsville Beach Museum of History Board of Directors or Wrightsville Beach Planning Board Holman put to use his working knowledge of the areas built environment.
This year the museum has also named its front exhibit room the Wright Holman Room and will present the official plaque designed by Holmans nephew in his memory at the shrimperoo on Sunday April 7 from 6-8 p.m. at Lumina Hall.
With local shrimp donated by Motts Channel Seafood and the buffet catered by Middle of the Island beverages of choice will be available for purchase. Tickets are currently available at the museum or via a board member for $20 with additional donations appreciated.
For more information or to purchase tickets call (910) 256-2569 or visit www.wbmuseum.com

The circa 1946 home donated by new owners Mark and Debbie Mitchell will be reborn as the regional headquarters for the North Carolina Coastal Federation a nonprofit state-wide organization that works to protect the states coastal water resources. Mike Giles coastal advocate for the NCCF says the historic house will be much more than an office for them.

We are in an office space now where we are cramped and out of room and we really cant showcase what you can do as far as low-impact development conserving rainwater and reducing stormwater runoff Giles says. The space is also going to allow us to greatly expand our outreach in education programs.

Before all of those things can happen the house must be raised from its foundation floated by barge down Motts Channel through the Intracoastal Waterway under the drawbridge into Lees Cut and hauled over land to its new site on town property.

On April 1 the NCCF will assume ownership of the home. Before Memorial Day Expert House Movers the same company that moved the Cape Hatteras Lighthouse will move the Palmgren-OQuinn House with the help of Atlantic Diving and Marine Contractors barge.

After the house is placed on the barge it will take an estimated 45 minutes to travel to a staging area where it will be carted onto a flatbed truck and driven to the new site. The $130 000 process of moving the house will be completed in one day Giles says but the entire reconstruction process will take months.

The Azalea in Wilmington

Azaleas are part of the huge genus Rhododendron.

The most popular azaleas grown in southeastern North Carolina are the Southern Indian (known as Indica) with their enormous flowers in many brilliant colors. They are considered midseason azaleas blooming halfway through the long azalea blooming season.  Formosa (magenta) George Lindley Taber (white with pink throat) and G. G. Gerbing (white) are popular Indica varieties. These are the main type of azaleas in the great gardens of Airlie Greenfield Lake and Orton Plantation.

There are deciduous azaleas native to the United States but evergreen azaleas are Asian natives. Most of the evergreen azalea varieties grown in the southeastern US are from Japan particularly the Indica and Kurume groups.

Experts agree the first Indica azaleas came from Boston to Magnolia Plantation near Charleston South Carolina in the mid-1800s. Magnolia is the first garden in the Southeast to grow azaleas. Azaleas may have made their way to Wilmington from Magnolia or from another plantation.

In the mid-1800s there were very few commercial nurseries and  due to the economy plants were available only to wealthier citizens. Plantation owners may have brought azaleas to one another on visits or sent them with interplantation shipments but commonly plants were passed along from gardener to gardener.

Get out for a run and benefit Cape Fear Volunteer Centers Big Buddy Program.

Your chance to meet the officially crowned North Carolina Azalea Festival Queen Azalea as she and her court
disembark from North Carolinas largest riverboat the Henrietta III.

Experience a variety of ships docked along the Cape Fear River.

Colt Ford and the LACS

Corner of Walnut and Front streets

Showcases some of the finest boxers from the national and international level of competition.

Daring performances and exotic animals for the whole family to enjoy.

Learn about US and foreign currency with more than 30 vendors from the surrounding area.

Features paintings from more than 100 artists from North Carolina and the US.

T he rewards come back in humane terms in making a difference in a childs life says Liz Kachris-Jones district administrator of the Guardian ad Litem Program (GAL). The volunteer is the single person in the process who speaks on behalf of the child so you have to know the child themselves. Its a wonderful sense. What youre doing will have an impact on them for a long time. It really is pivotal.

As the nation turns its full attention to the month of April and the 29th anniversary of Child Abuse Prevention Month the GAL program turns 30. Beginning as a state pilot program in 1983 GAL has served thousands of neglected and abused children by representing them in the courtroom and ensuring their best interest.

District Court Judge J. Corpening one of the programs earliest supporters has been an instrumental part of its development and longevity.

I was one of the first attorney advocates Corpening says. I was already involved in juvenile court and it was a wonderful change. I had asked to have the job. In the beginning there were a lot of trust issues between agencies and turf guarding. We had to develop relationships with other departments like DSS (Division of Social Services) over the years.

Since then GAL has evolved into a volunteer-based program vital to the juvenile court system.  Last year the program served more than 591 children in more than 1 200 court hearings.

We train volunteers four times a year and we have an effective screening process says Kachris-Jones. Not everyone is meant to be a volunteer and we dont accept everyone. Our children really need the commitment that we ask. Its very gratifying that 192 volunteers were able to give that last year.

Though the work can be straining Kachris-Jones believes the satisfaction from advocacy is worth it.

Judge Corpening recognizes the importance of GALs in court and values the relationships cultivated between volunteers and the kids they represent.

They really step into the childrens lives to advocate particularly with children that are a little bit older Corpening says. Ive watched them hug their guardians when they come into court. They have developed strong relationships and are a wonderful source of information. I dont know how we would do without them.