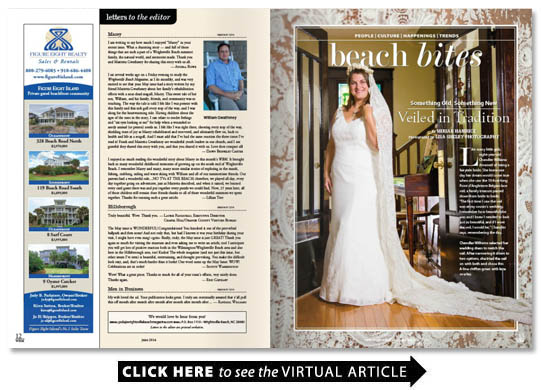 Like many little girls eight-year-old Chandler Williams dreamed of being a fairytale bride. She knew one day her dream would come true when she saw the 10-foot-long Point d Angleterre Belgian lace veil a family treasure passed down from bride to bride.

The first time I saw the veil was at my cousin s wedding. I remember how beautiful she was and I knew I needed to look just as beautiful and if I wore the veil I would be Chandler says remembering the day.

On June 7 Chandler will be the 45th bride in her family to wear the veil when she marries her fiance Sam Cartozzo at a family cottage near Nashville Tennessee. The tradition began with Chandler s great-great-grandmother Samuella Keith who wore the veil in her 1909 wedding. Six years ago the veil made an appearance in Wilmington during the marriage of Chandler s cousin Elizabeth Reynolds and Livingston Sheats. Elizabeth was the 42nd bride to wear the veil on November 8 2008.

For a 100-year-old veil it s in surprisingly good condition Chandler says. It really is priceless.

The family takes many precautions to assure it will be preserved for generations of brides to come. Between weddings the veil is carefully folded in layers of material and stored in a lockbox at a Nashville bank. Only four women are authorized access. When worn a barrier of tulle netting protects the veil from snagging or ripping. An appraisal in 1982 a year before Chandler was born valued the veil at $20 000.

The veil is one of several heirlooms Chandler will don on her wedding day. A string of seed pearls and a headpiece have been worn by a handful of other family brides. Chandler says her fiance is impressed with her family s bridal traditions. They were part of the vision for her big day long before he was.

Before I found the man I knew I would wear that veil Chandler says.

Brides who have worn the Keith Family Veil 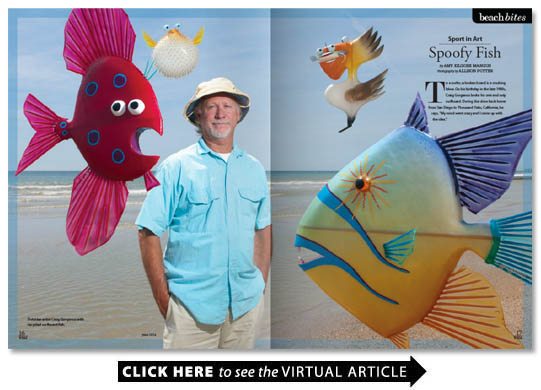 To a surfer a broken board is a crushing blow. On his birthday in the late 1980s Craig Gurganus broke his one and only surfboard. During the drive back home from San Diego to Thousand Oaks California he says My mind went crazy and I came up with the idea.

He could create whimsical colorful fish out of his broken surfboard. Initially Gurganus didn t sell his creations but gave them to friends as Christmas gifts. As soon as he realized he could make a living as an artist Fish Bouffant was born.

Gurganus an eastern North Carolina native says he named his business after ladies with big hairdos. Some women in eastern North Carolina still have that hair. The fish are kind of puffed out and it looks like one of their hairdos. He makes his home on Pine Street in Beaufort where he has a shop and gallery. In a former 1880s grocery store he uses damaged surfboards to mold marvelous one-of-a-kind sea creatures.

Friends bring Gurganus their broken boards. Depending on how bad the break Gurganus can make one to four fish out of each board.

First he removes the fiberglass outer shell exposing the foam. He cuts an outline of the fish body freehand shapes it and adds fins. Fins are made from fiberglass cloth and then pigmented. Gurganus uses multiple coats of spray paint to blend colors.

It s so fun working with all the different colors he says. Pop-out eyes are made with Ping-Pong balls. A final coat of high-quality enamel paint completes the process. He works on five pieces at a time six days a week.

Gurganus uses fish books and online sources for reference but strays from the original species to see how far he can stretch his idiom.

I want to take a real fish and make a spoof on it he explains. I take nothing and all of a sudden it s an animal that has its own personality. I don t make sad fish.

To date his largest piece is a shark measuring more than 12 feet mounted on the front of Mako Mike s a Kill Devil Hills restaurant. It took about two weeks to make.

Gurganus elaborates The tail is a whole surfboard and the body is a windsurfer.

Gurganus 61 doesn t enjoy the minutiae of taking orders and handling money. His real enjoyment comes from meeting people and making the fish.

It s a nice way to recycle too you know he says.