BY Marimar McNaughton and Hunter Houtzer 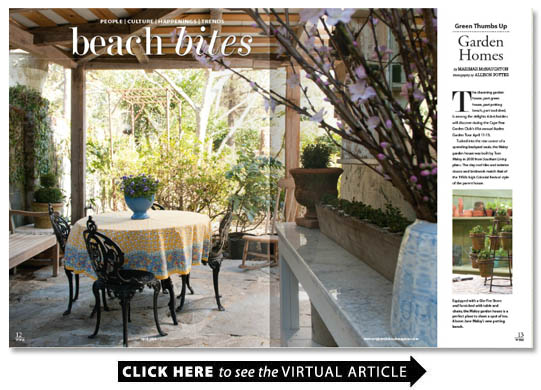 Tucked into the rear corner of a sprawling backyard oasis the Maloy garden house was built by Tom Maloy in 2000 from Southern Living plans. The clay roof tiles and exterior stucco and brickwork match that of the 1930s high Colonial Revival style of the parent house.

Jane Maloy says its always so hot in the summer the garden house found near the kumquat tangerine and lime tree grove provides a cool respite.

This years garden tour meanders through Wilmingtons historic neighborhoods — from Brookwood to Forest Hills Country Club Pines and Glen Meade — and mid-town to Greenville and Masonboro Sounds. All of the exquisitely groomed grounds have earned the clubs green thumb stamp of approval and none more so than the No. 1 garden on the self-guided tour Melissa Corbetts.

Corbetts delightful garden house has evolved from the country tin barn she used for years. In its place is an enchanting tiny house she modeled after her mothers garden house at her childhood home on Country Club Road.

Mine had to be tiny because my yards so small Corbett says yet her landscape is brimming with stone walks flowering trees water features and ornamental plants and pots.

Corbetts garden house is layered with thick jasmine vine drooling beneath scalloped-edge soffits window boxes banisters and spindles. Adorned with a collection of Chinese plates the walls of the garden house add a dash of whimsy to a lush array of outdoor rooms nestled within a rectangular space.

Fourteen sites are featured on the tour that opens Friday April 11 at 10 a.m. with the festive ribbon-cutting ceremony attended by the Azalea Queen and the Azalea Princess and their courts Azalea Belles and The Citadels Summerall Guard at the Hugh Morton Amphitheater at Greenfield Lake 1941 Amphitheater Drive.

For ticket prices outlet locations and a complete itinerary of gardens visit: www.capefeargardenclub.org

Kids dogs and costumes are all welcome at this fun run to benefit the Cape Fear Volunteer Center Big Buddy Program.

Experience a variety of ships docked along the Cape Fear River.

Be amazed by daring feats and exotic animals in this action-filled two-hour performance.

Off the Beaten Path Tour*

Get ready for some boot scootin at this country music concert headlined by Justin Moore and featuring Randy Houser and Josh Thompson.

Browse a collection of paintings by more than 100 artists from North Carolina and across the United States.

Walk through some of Wilmingtons finest yards and gardens in one of the Souths longest-running and most-loved springtime garden tours.

Stroll among craft art and food vendors. A fireworks show will be featured at 9 p.m. on Saturday. Visit the street fair main stage at 411 N. Front Street and the multicultural stage at the corner of Walnut and N. Front streets for a variety of performances.

Rock out to back-to-back performances by jam-band legends from Athens Georgia.

Learn about U.S. and foreign currency with more than 30 regional vendors.

Get a special peek inside Wilmingtons irreplaceable historic homes with proceeds benefiting the Historic Wilmington Foundation.

Attend a showcase of some of the finest boxers from the national and international levels of competition. 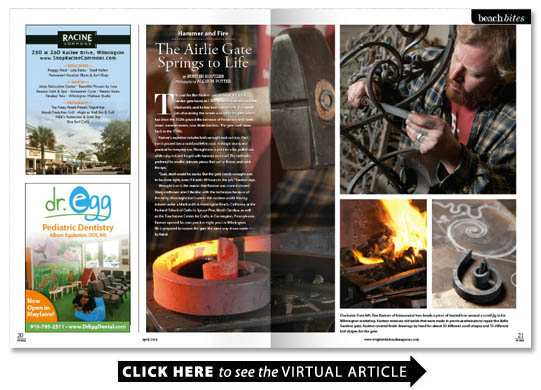 Hammer and Fire: The Airlie Gate Springs to Life

The coal fire Ben Kastner uses to forge the Airlie Garden gate burns at 1 800 degrees. Kastner is a local blacksmith and he has been tasked with the careful job of restoring the ornate wrought iron gate which has since the 1920s graced the entrance of Pembroke and Sarah Jones summer estate now Airlie Gardens. The gate itself dates back to the 1700s.

Kastners expertise includes both wrought and cast iron. Cast iron is poured into a mold and left to cool making it sturdy and practical for everyday use. Wrought iron is put into a fire pulled out while ruby red and forged with hammer and anvil. The method is preferred for smaller intricate pieces that curl or flower and catch the eye.

Sure steel would be easier. But the gate needs wrought iron to be done right even if it adds 60 hours to the job Kastner says.

Wrought iron is the reason that Kastner was commissioned. Many craftsmen arent familiar with the technique because of the rarity of wrought irons use in the modern world. Having trained under a blacksmith in Huntington Beach California at the Penland School of Crafts in Spruce Pine North Carolina as well as the Touchstone Center for Crafts in Farmington Pennsylvania Kastner opened his own practice eight years in Wilmington. He is prepared to restore the gate the same way it was made — by hand.

The metal can be up to 2 400 degrees when you take it out of the fire Kastner says In seconds you have to figure out whats wrong with it and how to fix it in the least amount of hits. Its getting colder the whole time.

He does this without gloves handling his tools bare handed without any of the hesitation that might be expected when working with melting metals. He then drops the forged piece into a slack tub where water lowers the temperature.

Because wrought iron is so hard to come by Kastner is recycling pieces of a fence from New Jersey which was made during a similar time period. He draws meticulous patterns to create the perfect scroll jig a template for bending hot metal. For flowers and leaves he uses a repouss� and chasing technique hammering the metal to create low and high reliefs making them appear as if they are blowing in the wind.

Kastners favorite parts of the fence are the sections where the wispy leaves cut into the vertical structural bars. They did not simply lay iron over iron he says they wove it putting beauty over utility.

Growing up Kastner was always banging on things with a hammer.

It got more fun when I could add fire. Even now if I see a hammer swing anywhere; I want to go into work he says Thats the cool thing about being a blacksmith I always get to make something cool.